The truth through the generations....of freeloaders

I am visiting my brother down here in L.A.  or Lower Alabama and I recently upgraded my phone and I saw a cartoon that I had forgotten that I had on the SD card from my "old" phone.   I remember seeing this cartoon in some stuff that my Dad had given me.  He as well as I do think disparagingly of "hippies".  I consider them freeloaders back when I first remembered seeing them in the early 70's. 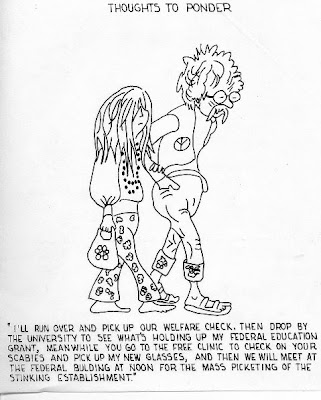 I had taken a picture of it so I could upload it and I guess I promptly forgot about it.  I see a lot of parallels from the hippie movement of yesteryear to the present "occupy movement" and the other liberal/progressive/democratic followers.

They think liberalism is fine as long as they have access to other peoples money.  With the debt that is being racked up I don't think that the spigot will stay open much longer.  Now we have President hope and change trying to push us into a war in Syria.  I have heard the same bleat..."Well Bush did that?"   Actually no...President Bush went through congress and both flipper John Kerry and Thunder Rodent Thighs Hillery Clinton voted for it before deciding to go against it.  Now we have the British saying "no" and they would in the past back anything we did, but I guess that being repeatedly insulted and snubbed  by the affirmative action Nobel Peace prize President kinda got old. 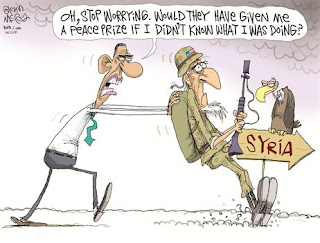 Posted by MrGarabaldi at 3:50 PM