I have an "older" AR-15 an "J-15" made by E.A. Arms from Baton Rouge LA.  I bought it when I first got out of the service in 1991. It is definitely "pre ban" so I have the bayonet lug on it.   It needed some help and since I was an armorer in the Army I rebuilt it with some parts I had lying around.(no "go-fast") crap   Since then the technology involving AR-pattern rifles have changed and I knew that my rifle with plain iron sights was definitely obsolete or a "classic" as they say.   I had mention to AM his site is Here about upgrading my AR pattern rifle.  he suggested that I go with a "Vortex Strike-fire" and a flattop for my AR to bring it more to the level of today's rifles.   Well I started looking around and at a site called Slick Guns I saw a link for a site called Red Barn Armory their site is here and I picked up a complete flattop including forward assist and "dust cover" for a little over $100 bucks.  I saw a Vortex Strike fire on ebay for around $130 and then picked up a folding sight from NC Armory.
While I was visiting my brother I decided to start upgrading my rifle. 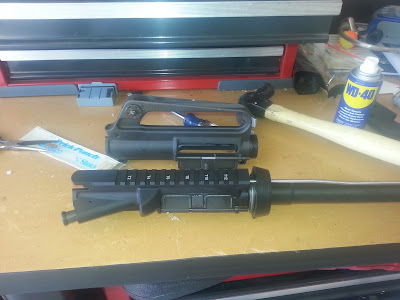 As you can see, I had already removed the barrel(I love the modular design of the AR) and reattached it to the flat top.  The old upper receiver is an original M16 pattern before forward assist.  I never had a problem that required the assistance of the "forward assist"  But the new one has it along with the brass deflector.  I will mount the "old" receiver to the original barrel that I still have, you know the old triangular suppressor  and original triangular fore-grips on it. 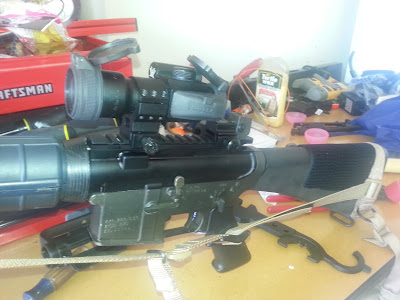 This is what it looked finished.  The fit of the new receiver was "tight" especially on the second "take out pin", but it cooperated without any major effort.   On the table is an AR-15 armorers tool, necessary when removing barrels.  As you can tell there is a color difference between the older rifle and the new parts.  I also used a flip sight from North Carolina Armory, got it off Amazon.   In case y'all are wondering about the Velcro, I had a "Delta" cheek piece for the stock, they are made to slide over the stock, but I cut it and used Velcro so I can remove it and reattach it as necessary for a scope I had bought 12+ years ago.  I decided that due to today's environment that such an arrangement is "tactically inefficient" or basically it was a not so good idea. 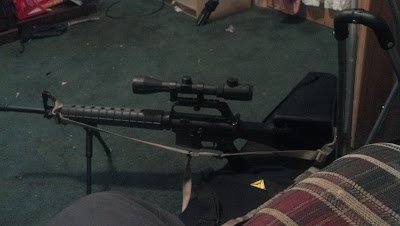 This is what it looked like for the past 10+ years... I decided to change it and take advantage of the modular possibilities of Mr Stoner's design. 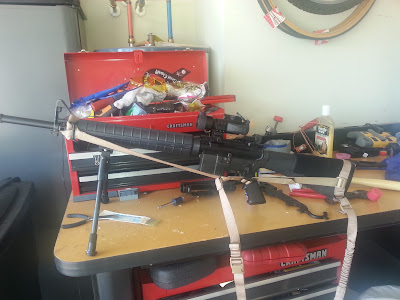 This is what it looks like now.  I still have the A-2 barrel on it.   My brother called it a "musket" since he is used to the M4 pattern rifles.  I might change it out in the future, but I do like the barrel, it is what I am used to when I was in the service.    I also picked up a "bore sighter" to help align the optical sight with the barrel.  I need to locate some "smiley" face stickers for the lens cap though.   It looks good for a semi-auto rifle;) 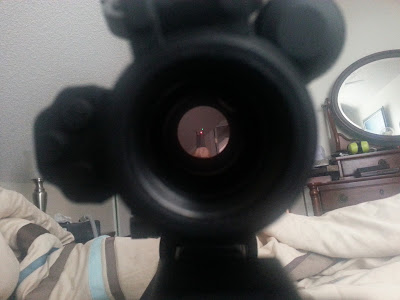 This is me aligning it up...I am using the camera on my kinda smart phone to take the picture, I wasn't sure how the picture would work.  I since have aligned the dots.  I know from my ballistics class that a bullet will climb at first before friction and gravity overcome the velocity of the round.  I have the red/green dot a "smidge" above the bore sight laser.  I will tweak it once I go to the range I will make the final adjustments.
The sites I have mention, I am getting no compensation or "swag" for dropping their names.  I was impressed enough by their quality and service to give them the "free" advertisement.   I am looking forward to going to the range.