Somebody at work has a sense of humor, the desktop computer we use at work to look up manuals and other things , the desktop changes.  it went from Foghorn Leghorn to Daffy Duck,  So I did some background on it. so I figured I would post about it. 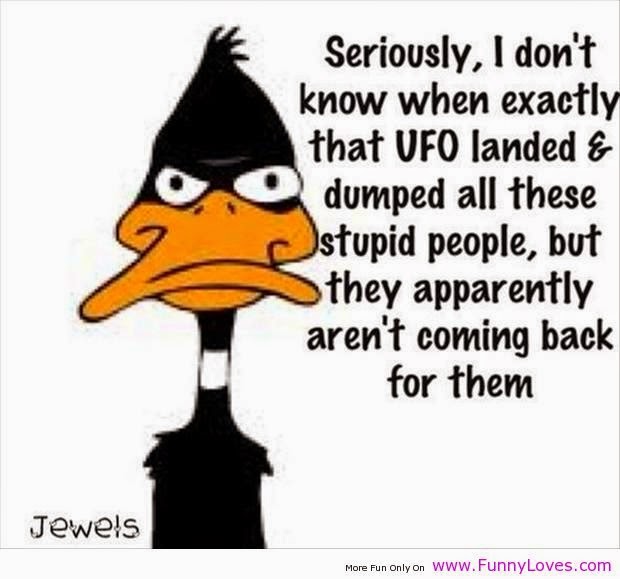 This is the picture that got this post going.....I have such a wide variety of subject matter on my blog...from the Obama sux stuff, the 2nd amendment stuff, the aviation stuff...and of course...Cartoons!   I love cartoons, Some things you don't outgrow...

Daffy first appeared in Porky's Duck Hunt, released on April 17, 1937. The cartoon was directed by Tex Avery and animated by Bob Clampett. Porky's Duck Hunt is a standard hunter/prey pairing for which Leon Schlesinger's studio was famous, but Daffy (barely more than an unnamed bit player in this short) was something new to moviegoers: an assertive, completely unrestrained, combative protagonist. Clampett later recalled:


"At that time, audiences weren't accustomed to seeing a cartoon character do these things. And so, when it hit the theaters it was an explosion. People would leave the theaters talking about this daffy duck." 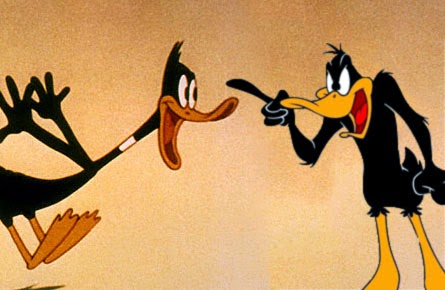 " Early Daffy Duck and the modern version we know.."

This early Daffy is less anthropomorphic and resembles a "normal" black duck. In fact, the only aspects of the character that have remained consistent through the years are his voice characterization by Mel Blanc and his black feathers with a white neck ring. Blanc's characterization of Daffy holds the world record for the longest characterization of one animated character by his or her original actor: 52 years.
The origin of Daffy's voice is a matter of some debate. One often-repeated "official" story is that it was modeled after producer Leon Schlesinger's tendency to lisp. However, in Mel Blanc's autobiography, That's Not All Folks!, he contradicts that conventional belief, writing, "It seemed to me that such an extended mandible would hinder his speech, particularly on words containing an s sound. Thus 'despicable' became 'desthpicable.'"
Daffy's slobbery, exaggerated lisp was developed over time, and it is barely noticeable in the early cartoons. In Daffy Duck & Egghead, Daffy does not lisp at all except in the separately drawn set-piece of Daffy singing "The Merry-Go-Round Broke Down" in which just a slight lisp can be heard.
In The Scarlet Pumpernickel (1950), Daffy has a middle name, Dumas as the writer of a swashbuckling script, a nod to Alexandre Dumas. Also, in the Baby Looney Tunes episode "The Tattletale", Granny addresses Daffy as "Daffy Horatio Tiberius Duck". In The Looney Tunes Show (2011), the joke middle names "Armando" and "Sheldon" are used.

ex Avery created the original version of Daffy in 1937. Daffy established his status by jumping into the water, hopping around, and yelling, "Woo-hoo! Woo-hoo! Woo-hoo! Hoo-hoo! Woo-hoo!" Animator Bob Clampett immediately seized upon the Daffy Duck character and cast him in a series of cartoons in the 1930s and 1940s. The early Daffy is a wild and zany screwball, perpetually bouncing around the screen with cries of "Hoo-hoo! Hoo-hoo!" (In his autobiography, Mel Blanc stated that the zany demeanor was inspired by Hugh Herbert's catchphrase, which was taken to a wild extreme for Daffy.) Clampett physically redesigned the character, making him taller and lankier and rounding out his feet and bill. He was often paired with Porky Pig.


While Daffy's looney days were over, McKimson continued to make him as bad or good as his various roles required him to be. McKimson would use this Daffy from 1946 to 1961. Friz Freleng's version took a hint from Chuck Jones to make the duck more sympathetic, as in the 1957 Show Biz Bugs. Here Daffy is arrogant and jealous of Bugs, yet he has real talent that is ignored by the theatre manager and the crowd. This cartoon finishes with a sequence in which Daffy attempts to wow the Bugs-besotted audience with an act in which he drinks gasoline and swallows nitroglycerine, gunpowder, and uranium-238 (in a greenish solution), jumps up and down to "shake well" and finally swallows a lit match that detonates the whole improbable mixture. Some TV stations, and in the 1990s the cable network TNT, edited out the dangerous act, afraid of imitation by young kids.


While Bugs Bunny became Warner Bros.' most popular character, the directors still found ample use for Daffy. Several cartoons place him in parodies of popular movies and radio serials. For example, Drip-Along Daffy (released in 1951 and named after the popular Hopalong Cassidy character) throws Daffy into a Western, while Robin Hood Daffy (1958) casts the duck in the role of the legendary outlaw Robin Hood. In Duck Dodgers in the 24½th Century (1953), a parody of Buck Rogers, Daffy trades barbs (and bullets) with Marvin the Martian, with Porky Pig retaining the role of Daffy's sidekick. Other parodies were Daffy in The Great Piggy Bank Robbery (1946) as "Duck Twacy" (Dick Tracy) by Bob Clampett and as Stupor Duck (Superman, now a WB property himself) by Robert McKimson.

One of my favorite roles for Daffy Duck...

Bugs' ascension to stardom also prompted the Warner Bros. animators to recast Daffy as the rabbit's rival, intensely jealous and determined to steal back the spotlight, while Bugs either remained indifferent to the duck's jealousy or used it to his advantage. Daffy's desire to achieve stardom at any cost was explored as early as 1940 in Freleng's You Ought to Be in Pictures, but the idea was most successfully used by Chuck Jones, who redesigned the duck once again, making him scrawnier and scruffier. In Jones' famous "Hunting Trilogy" (or "Duck Season/Rabbit Season Trilogy") of Rabbit Fire with Rabbit Seasoning and Duck! Rabbit, Duck! (each respectively launched in 1951, 1952, and 1953), Daffy's vanity and excitedness provide Bugs Bunny the perfect opportunity to fool the hapless Elmer Fudd into repeatedly shooting the duck's bill off. Also, these cartoons reveal Daffy's catchphrase, "You're despicable!" Jones' Daffy sees himself as self-preservationist, not selfish. However, this Daffy can do nothing that does not backfire on him, more likely to singe his tail feathers as well as his dignity than anything. It’s thought that Chuck Jones based Daffy Duck’s new personality off of his fellow animator Bob Clampett, who, like Daffy, was known as a shameless self-promoter.

Film critic Steve Schneider calls Jones' version of Daffy "a kind of unleashed id." Jones said that his version of the character "expresses all of the things we're afraid to express." This is evident in Jones' Duck Amuck (1953), "one of the few unarguable masterpieces of American animation" according to Schneider. In the episode, Daffy is plagued by a godlike animator whose malicious paintbrush alters the setting, soundtrack, and even Daffy. When Daffy demands to know who is responsible for the changes, the camera pulls back to reveal none other than Bugs Bunny. Duck Amuck is widely heralded as a classic of filmmaking for its illustration that a character's personality can be recognized independently of appearance, setting, voice, and plot. In 1999, the short was selected for preservation in the United States National Film Registry.

Daffy appeared in later cartoons. He was one of many Looney Tunes characters licensed by Warner Bros. to appear in the 1988 Disney/Amblin film Who Framed Roger Rabbit. In the film, Daffy (utilizing his original, wacky characterization) shares a scene with his Disney counterpart and rival Donald Duck whilst engaged in a piano duel.

Daffy Duck also appeared in several feature-film compilations, including two films centering on Daffy. The first was released in 1983, Daffy Duck's Fantastic Island; the second came in 1988, Daffy Duck's Quackbusters, which is considered one of the Looney Tunes' best compilation films and featured another new theatrical short, "The Night of the Living Duck". Daffy has also had major roles in films such as Space Jam in 1996 and Looney Tunes: Back in Action in 2003. The latter film does much to flesh out his character, even going so far as to cast a sympathetic light on Daffy's glory-seeking ways in one scene, where he complains that he works tirelessly without achieving what Bugs does without even trying. That same year, Warner Bros. cast him in a brand-new Duck Dodgers series. (It should be stressed that in this show, Duck Dodgers actually is Daffy Duck due to him being frozen in suspended animation in some unknown incident.) He had a cameo appearance in the Sylvester and Tweety Mysteries episode "When Granny Ruled the Earth", first airing on March 27, 1999. Daffy has also been featured in several webtoons, which can be viewed online. 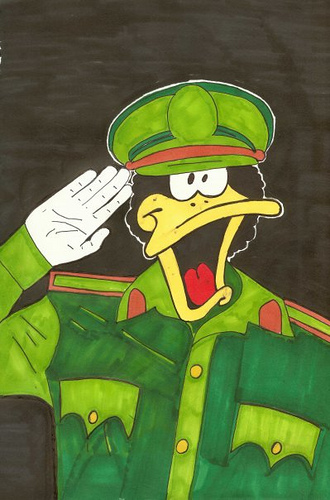 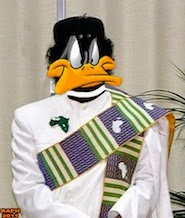 Posted by MrGarabaldi at 5:50 PM