Politically incorrect thought and other musings....

I will have some irreverent comments.  I was going to post a thingie on Daffy Duck...But it will wait until tomorrow. 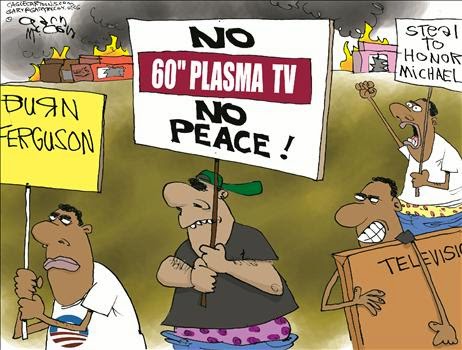 First off, I was paying attention to the Ferguson shooting and the subsequent riots thieving and looting in the name of the latest saint of ghettoness.  A couple of years ago, we had St Trayvon of Skittles, and the race based narrative.  This happened before the 2012 election...so the democrats used this to gin up their base to go vote.  Now it is a couple of years later and we have St Michael of swisher sweets to stir up the democrat base to get them to the poll.  If pattern follows. there will be another race based incident in 2016 to get the base riled up so they go to the polls.
Well we have this shooting in Ferguson Missouri and the local denizens are pissed....So pissed that they burned down stores and looted them in their own neighborhoods.  Many people have heard the narrative that it was a racist cop that shot that choirboy on the way to college.  never mind that less than an hour before, the saint in question strong armed a clerk as he walked out with a pack of swisher sweet cigars.   Can ruin the narrative you know....
Now we have the professional race grievance industry descending on the location to "demand Justice for Michael Brown."    You know the same people that keep things stirred up to keep themselves in power and money.

Gotta never let a crisis go to waste. I heard that they have set up a voter registration area right by the memorial to the latest black saint, Michael Brown. There was marijuana in his system so maybe we should call him St. Michael of Weed. The Democrats are worried about the midterms so they are out there riling up the natives trying to get them to flock to the polls. Wouldn’t it be nice to see this policy backfire with a white backlash due to the rioting and looting? What does looting have to do with this?

I have never seen race relations soo bad..When Americans trying to prove that they are not racist, elect the most incompetent president in modern history to prove that we are not racist.   We have the professional race hustlers including our Attorney General 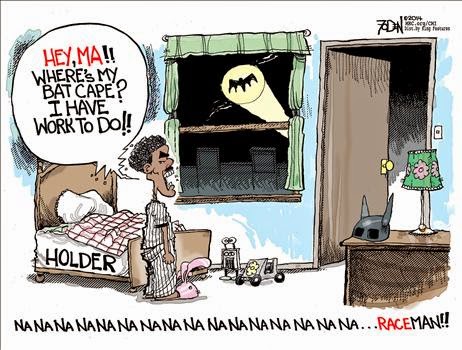 going to the scene to instead of calming things down will actually stir things up.  There have been several autopsies and all show the same thing.  That he was shot 6 times and not from the back as originally alleged.   Also I have read on several web sites that outsiders are stirring things up for their own agenda so to keep fanning the racial fire so it keeps burning. 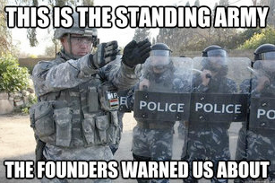 I also will touch on another item....the militarization of the police.  I have posted several times as have others that are concerned with the goodies that the police is getting from the feds.   it is believed that the heavy presence of the police wearing "camo" and looking like the marines in Fallujah actually inflamed the situation.   The ham fisted tactics seemed to cause more problems.  Like I said, I believe that other groups from DHS to the black panthers and the other race based groups are using the riots to further their agenda.
I keep looking for the distraction from the media...what are they distracting us from?   IS it the failed foreign policy of the anointed one?  Is it the 6th year of the job less recovery due to the policies of the Jesus of the left?   is it the ruinious debt that we as a country are running up to support the spending habits of the establishment at D.C?   is it the war on the middle class that the democrats are waging despite their rhetoric to the contrary?  Look at the effects of Obunglercare and the taxation policies of the government?

I don't have the answers for all of this but I do know that we have forgotten to be Americans.  We are soo polarized that there is no give anymore and I wonder if the next step is fire and that is what will take to burn out the hatred.

Email ThisBlogThis!Share to TwitterShare to FacebookShare to Pinterest
Labels: You have got to be shitting me..rants.