I had posted a couple of days ago about TATTOO's and drumming.  I first ran across it a few years ago when I ran across the U.S. Navy ceremonial rifle team doing a performance in Norway, who knew that the squids had a performing ceremonial rifle team...and they are GOOD.    I saved the video in my "Youtube" favorites.  Since then I occasionally tune in and see what is new.  Back in college I went to a military college at North Georgia.  I only went 1 year before I was broke and joined the U.S. Army.  The plan was for me to go back to college, but when I got out in 1991 after 6 years and Desert Storm, I was extremely bitter and had major anger issues and didn't go back to college and finish up and get my commission.  I regret few things in life...but that is one of the few things I do regret. 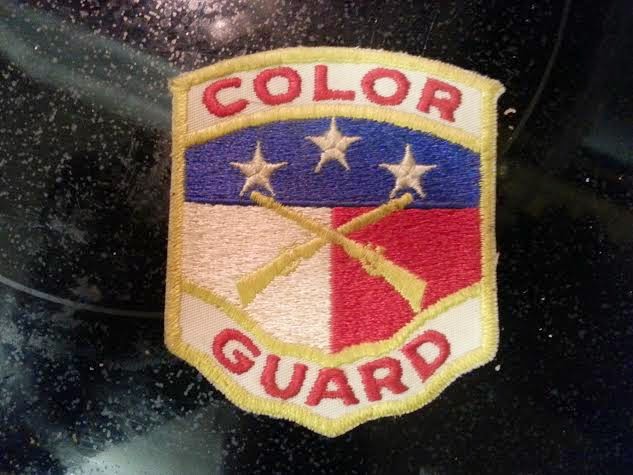 One of the things I did was in the Color Guard, we would do parades and other performances.  There was something about doing this stuff in front of people, the performing of the martial stuff, the sheer discipline shown is something that I dig.  We wore the patch on the front pocket of our green fatigues.  It was a mark of distinction.


"Our Color Guard is the 2001 and 2002 National Champion. This unique organization is the loyal guard of our nations colors. They are responsible for protecting and presenting the colors at formal reviews and Corps functions. They also serve as ambassadors during special occasions requested by the University of North Georgia community, such as Atlanta Braves baseball games, Atlanta Athletic Club events and surrounding Veteran's Day celebrations."

The Color Guard motto
"Duty, Honor,Country"
Well as part of my surfing, I ran across the "Secret Swiss Drum Corp"  They are very good and I had thought they were part of the Swiss Military.  They are not...they are volunteers.

Top Secret Drum Corps is a precision drum corps based in Basel, Switzerland. With 25 drummers and color-guard members, the corps became famous for its demanding six-minute routine performed at the Edinburgh Tattoo in 2003. With its invitation to Edinburgh, Top Secret became one of the first non-military, non-British Commonwealth acts to perform on the Esplanade at Edinburgh Castle.
Since its success in 2003, Top Secret was invited to return to Edinburgh in 2006 with a new and improved routine. They were invited a third time in 2009 and again in 2012. Under the leadership of Erik Julliard, the band is also responsible for the founding of the Basel Tattoo, a military tattoo show similar to the Edinburgh Military Tattoo, now held annually in Basel.

Top Secret has its roots in the rich drumming traditions of the band's home city, Basel, Switzerland, which is known for its annual carnival called Fasnacht. The city is said to have over 3,000 active drummers at any one time. These drummers perform at traditional events such as Fasnacht, the Vogel Gryff, Charivari, and various parades associated with the city's guilds. A Trommelkönig (Drummer King) competition is also held every year by the city's Fasnacht Committee.
Basel drumming style is militaristic, derived from the military drumming drills of Swiss soldiers dating back to the Middle Ages. Top Secret in many ways adheres to the military nature of Basel drumming, but differs in many respects. Its drummers play at a much faster rate. Also, while traditional Basel drumming is somber and favors traditional marching tunes (accompanied by fifes during the Fasnacht), Top Secret's drumming style is upbeat and playful. Over the years, the corps adopted many elements from Drum Corps International (DCI), Scottish, and American rudimental drumming. Segments of their routines feature a "rhumba", a drummer's duel, drumstick juggling, exploding flagpoles, and other crowd-pleasing details. Their 2012 routine at the Edinburgh Tattoo included strobe lights within their drums that appeared to be activated by the drummer's beats. Perhaps because of their 18th Century uniforms and precision work, the Corps is often referred to as a military band or a part of the Swiss Army, but it is not affiliated with any military unit.

Top Secret's members are highly dedicated college students to drummers with diverse day jobs—bankers, civil servants, factory workers, etc. They give up their free time to practice nearly every day of the year. Due to the demanding nature of the work, its membership is frequently changing.

Since its 2003 performance at Edinburgh, Top Secret has enjoyed worldwide success. They have performed at various venues in Europe, the United States, Australia and at the 2008 South African Tattoo held from 11 - 14 September 2008. In 2011, they performed at the Quebec Military Tattoo.
They are the subject of a documentary film by Swiss television which recounts their rise to fame at the Edinburgh Tattoo. A feature film based on the Edinburgh endeavor is currently in the works with Insert Films, Switzerland.