Marvin the Martian..."Where is the kaboom?..there was supposed to be a Earth shattering Kaboom?"

Well I was going to do a post about our post racial president sending 3 aids to the funeral to the latest saint of ghettoness" Michael of Swisher Sweet".  More then he sent to Margaret Thatcher's funeral.  Although he nearly emptied the white house going to the funeral of Nelson Mandela where the power selfie became viral.  Nothing like reminding the blacks to vote democratic in the next election.  But I didn't have it in me, better bloggers than I have already said what is necessary and I would be a poor addition.
So instead I will continue with cartoons...Yay!   This is a continuation of what I started with FogHorn Leghorn and Daffy Duck.  Again a wise guy from work used a cartoon on the workstation we use to look for airplane manuals to put up a cartoon.  This week it was "Marvin the martian." 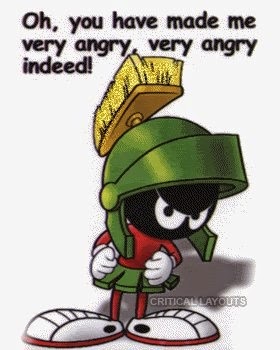 This was the cartoon that started this weeks article.....Bing is a good thing.

Animation director Chuck Jones noted that Bugs Bunny soon began to outwit Yosemite Sam (the creation of the senior director, Friz Freleng), so he decided to create the opposite type of character; one who was quiet and soft-spoken, but whose actions were incredibly destructive and legitimately dangerous. Marvin the Martian made his debut in 1948's Haredevil Hare.
Unlike the other villains, Marvin can be actually evil at most points, and not just daft. However, he is a funny cartoon character like the other villains. Marvin is the quietest of the Warner Bros villains, and the most soft-spoken, and unlike most of the other villains, he is very clever and competent in general.

Marvin's design was based on a conception of the Roman god Mars. "That was the uniform that Mars wore — that helmet and skirt. We thought putting it on this ant-like creature might be funny. But since he had no mouth, we had to convey that he was speaking totally through his movements. It demanded a kind of expressive body mechanics."
Marvin was never named in the original shorts (though he was called the Commander of Flying Saucer X-2 in The Hasty Hare in 1952), but decades later, when the character attracted merchandising interest, the current name was selected.

Marvin hails from the planet Mars, but is often found elsewhere. He is often accompanied by his dog "K-9", and sometimes by other creatures (one gag, first used in Hare-Way to the Stars (1958), being candy-sized "Instant Martians" that become full-size on addition of drops of water).
Marvin wears a Roman soldier's uniform, with basketball shoes. The style of these shoes resembles the Chuck Taylor All-Stars brand name, considered to be the "generic" or "standard" basketball sneaker. His head is a black sphere with only eyes for features. The curved crest of his helmet appears, with the push-broom-like upper section, to comically resemble an ancient Greek hoplite's or a Roman Centurion's helmet. The appearance of the combination of Marvin's head and helmet allegedly led to Bugs Bunny thinking he was a "bowling ball wearing a spittoon" in one Looney Tunes animated short. Marvin speaks with a soft, nasally accent, and often speaks technobabble. The helmet and skirt that surround him are green and his suit is red (in a few of the original shorts, his suit was green). He is also known for his trademark quotes "Where's the kaboom? There was supposed to be an earth-shattering kaboom!", "Isn't that lovely?", and "This makes me very angry, very angry indeed."

On numerous occasions, Marvin has tried to destroy the Earth with his "Illudium Q-36 Explosive Space Modulator" (sometimes pronounced "Illudium Pu-36" or "Uranium Pu-36"). Marvin always laboriously over-pronounces the name of the device, which resembles a mere stick of dynamite, in order to avoid any possibility of confusing it with some other similar form of explosive technology.Marvin attempts to destroy the Earth because, he reasons, "it obstructs my view of Venus"; he has been trying to destroy the Earth for more than two millennia, suggesting that members of his species, and possibly martian creatures in general, have extremely long lifespans. The original reference to "Uranium Pu-36" changed to "Illudium PU-36" in subsequent cartoons . Marvin is consistently foiled by Bugs Bunny. He has battled for space territory, Planet X, with Daffy Duck, a.k.a. Duck Dodgers in the 24½th Century.
Here is Marvin and Michigan J Frog( I will probably do that one next week) 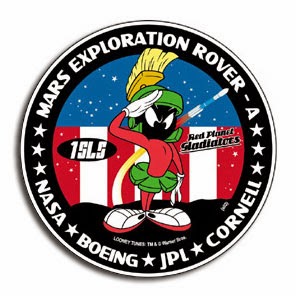 Marvin's likeness appears in miniature on the Spirit rover on Mars as well as on the mission launch patch
Posted by MrGarabaldi at 3:41 AM

Email ThisBlogThis!Share to TwitterShare to FacebookShare to Pinterest
Labels: cartoons, marvin the martian