Well I was at work and one of the desktops had this picture on it so it got me thinking about what next to blog about.

I always liked FogHorn Leghorn, especially the "southern-ism" that the rooster uses.  One of my favorite quotes is "“Fortunately I always keep a spare in my locker”.  I even use the same inflection as the character.

Here is a list of quotes from various FogHorn Leghorn cartoons:
“Love that dog … love that dog”
“What’s it all about boy, elucidate!”
“That’s a joke, I say that’s a joke son”
“Go, I say go away boy, you bother me”
“His muscles are as soggy as a used tea bag”
“I made a funny son and you’re not laughin’
“That boy’s about as sharp as a bowling ball”
“I keep pitchin’ ‘em and you keep missin’ ‘em”
“That boy’s as timid as a canary at a cat show”
“Fortunately I always keep a spare in my locker”
“That woman’s as cold as a nudist on an iceberg”
“Nice mannered kid, just a little on the dumb side”
“That kid’s about as sharp as a pound of wet liver”
“You’re way off, I say you’re way off this time son!”
“Nice girl, but about as sharp as a sack of wet mice” 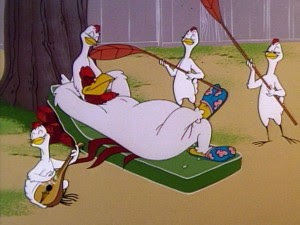 “Nice boy but he’s got more nerve than a bum tooth”
“I say, boy, pay attention when I’m talkin’ to ya, boy”
“Pay attention, boy, I’m cuttin’ but you ain’t bleedin’!”
“Smart boy, got a mind like a steel trap – full of mice”
“He’s so dumb he thinks a Mexican border pays rent”
“Hmmm, bare, I say bare as a cooch dancers midriff”
“Oh, that woman, got a mouth like an outboard motor”
“That dog’s like taxes, he just don’t know when to stop”
“That boy’s as strong as an ox, and just about as smart”
“Now I wonder what ol’ busy body widow hen is up to”
“Boy’s gotta mouth like a cannon, always shootin’ it off”
“This boy’s more mixed up than a feather in a whirlwind”
“That dog, I say that dog’s strictly GI – gibberin idiot that is”
“Don’t, I say don’t bother me dog, can’t ya see I’m thinkin’
“For-I say fortunately I always carry a spare set of feathers”
“That, I say that boy’s just like a tatoo, gets under your skin”
“Kid don’t quit talkin’ so much he’ll get his tongue sunburned”
“That dog, I say that dog is lower than a snake full of buckshot”
“That dog’s as subtle as a hand grenade in a barrrel of oat meal”
“Boy, you cover about as much as a flapper’s skirt in a high wind”
“Pay attention to me boy! I’m not just talkin’ to hear my head roar”
“That’s the trouble with that fool dog, always shootin’ his mouth off”
“That’s what I’ve been – I say, that’s what I’ve been telling you, boy!”
“Now what, I say now what’s that skinny old hen doin’ up on the barn”
“That, I say that dog’s busier than a centipede at a toe countin’ contest”
“Now cut that out boy, or I’ll spank you where the feathers are thinnest” 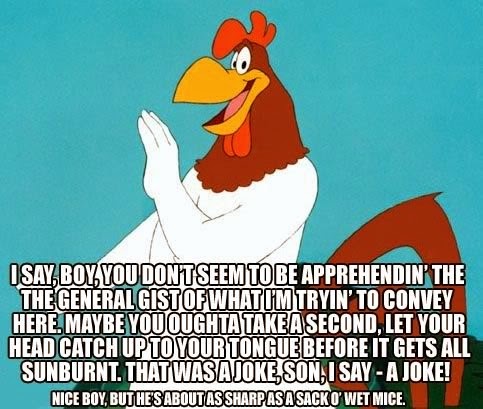 “Look sister is any of this filterin’ through that little blue bonnet of yours”
“I got, I say I got this boy as fidgety as a bubble dancer with a slow leak”
“Stop, I say stop it boy, you’re doin’ alot of choppin’ but no chips are flyin’
“This is going to cause more confusion than a mouse in a burlesque show”
“You know there might, I say there just might be a market for bottled duck”
“What’s, I say what’s the big idea wrappin’ a lariat around my adams apple”
“Fortunately I keep my feathers numbered, for, for just such an emergency”
“What in the, I say what in the name of Jesse James do you suppose that is”
“Gal reminds me of a highway between Forth Worth and Dallas – no curves”
“Now what, I say what’s the big idea bashin’ me in the bazooka that-a-way boy!”
“She remi – I say, she reminds me of Paul Revere’s ride, a little light in the belfry”
“Now what, I say what’s the big idea bashin’ me on the noggin’ with a rollin’ pin!”
“Now who’s, I say who’s responsible for this unwarranted attack on my person!”
“This boy’s making more noise than a couple of skeletons throwin’ a fit on a tin roof”
“The snow, I say the snow’s so deep the farmers have to jack up the cows so they can milk’em”
“What a day for trampin’ through the woods … lump dum do di do do doh, doo dah, doo dah”
“Now that, I say that’s no way for a kid to be wastin’ his time, readin’ that long-haired gobbledegook”
“It’s sure, I say it’s sure quiet around here, you could hear a caterpillar sneakin’ across a moss bed in tennis shoes”
“As senior rooster ’round here, it’s my duty, and my pleasure, to instruct junior roosters in the ancient art of roostery”
“Hey boy, what’s the idea jackin’ that pot up under me?  Jack?  Pot?  Ahuh, huh … jack pot, that’s a joke son, don’t ya get it?”

Foghorn J. Leghorn is an American character that appears in the Looney Tunes and Merrie Melodies cartoons for Warner Bros. Pictures. He was created by Robert McKimson, and starred in 28 cartoons between 1946 and 1963 in the Golden Age of American animation. All 28 of these cartoons were directed by McKimson.


The character of Foghorn Leghorn was directly inspired by the popular character of Senator Claghorn, a blustering Southern politician played by Kenny Delmar who was a regular character on the Fred Allen radio show. The rooster adopted many of Claghorn's catch phrases, such as "That's a joke, ah say, that's a joke, son." Delmar had based the character of Claghorn upon a Texas rancher who was fond of saying this.
A leghorn is a breed of chicken, and foghorn describes the character's loud, overbearing voice.
According to Leonard Maltin the character's voice was also patterned after a hard-of-hearing West Coast-only radio character from the 1930s, known simply as The Sheriff, on a radio program called Blue Monday Jamboree. The voice has similarities to that of another Mel Blanc voice: Yosemite Sam (a strictly Friz Freleng character). 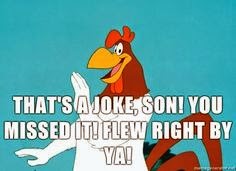 Foghorn Leghorn is a large, white adult Leghorn rooster with a stereotypically Southern accent, a "good ol' boy" speaking style, and a penchant for mischief. The first half of his name is a joke about him being loud and obnoxious, while the second half refers to a breed of chicken (a white leghorn). He first appeared in 1946 in a Henery Hawk film titled Walky Talky Hawky. All of the motion picture Foghorn Leghorn cartoons were directed by Robert McKimson, and the rooster vies with the Tasmanian Devil as the most popular character associated with the director.
Many of the gags involved Foghorn and a canine nemesis (formally known as The Barnyard Dog within Warner today, though on early model sheets his name is given as George P. Dog) engaging in one-upmanship through a series of pranks. Unlike other Looney Tunes rivalries—with the notable exception of the Wile E. Coyote and Road Runner series—Foghorn is often the initial aggressor out of self-amusement and subsequently on the 'losing' end of gags. Most common among them was Leghorn's taking up a plank of wood, while ambling along humming "Camptown Races" (the only intelligible words being "DOO-Dah! DOO-Dah!"), coming to the sleeping Dog with his front half inside his doghouse, picking up his tail and rapidly spanking the dog with a plank of wood. Occasionally, Foghorn sings the song, but replaces "Camptown ladies sing this song..." with "Lump-teen-dozen and a-doo-dah day...". He does not sing any other part of the song, reverting to humming after the DOO-Dah's. Foghorn Leghorn loses his feathers very often in the episodes, usually revealing his bare skin or his boxers.
The dog would give chase, usually with his leash still attached to his collar, until the leash stretched taut and his barking was replaced by an anguished howl. At times, when the dog would continue to bark, he would also yell, "Aaaaaahhhhh, shuuutupp!!" In rare cases, it's the dog that starts the series of pranks; as such it is somewhat difficult to tell who started the feud. This gag was passed down to the Leghorns' grandson in Feather Bluster, where Foghorn was puzzled as to why the kid was behaving that way and the Dog was all too happy to remind him: "Ain't nothin' wrong with 'im, Foggy, 'cept that he takes after you."
He was joined in a few episodes by a weasel called 'Bill' who initially attempted to eat him but ended up joining forces to outwit the aforementioned canine.
Other recurring themes throughout the cartoons included the attempts of the diminutive Henery Hawk to catch and eat Foghorn, and the rooster's efforts to woo the widowed hen Miss Prissy (often by babysitting her bookish son, Egghead, Jr.). 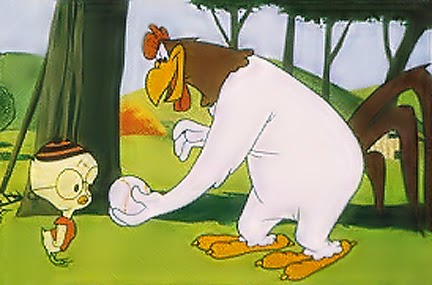 Posted by MrGarabaldi at 8:42 AM