Monday Music "What about me" from Moving Pictures

I was going to go with Buggaloo's "Video killed a radio star" but this song came on while I was at work and I decided to go with this one.  It isn't as well known as the other song who's rotation on MTV made it a cult classic.   I remembered hearing this song in the early 80's then it kinda disappeared.  I then heard it on XM radio and it took a while before my "free music downloads" found the song and I downloaded it on my phone.  It is kinda haunting song and it is a bit sad.  it to me talks about people being ignored by everybody else.  This resonates with me a bit for I was a bit of a social pariah in school.  I was one of those kids that were ignored by the "beautiful people."  For this reason I don't go to my high school reunions.  My 30th reunion is coming up.  I did go to one....it was my 20 reunion...and the only people that were there were the "beautiful people"...the cheerleaders and jocks.  I was with the JROTC crowd back then and most of the people that I hung around with while I was in high school were out serving our country.
I went to my 20th  reunion back in 2004 and the old cliques formed up again and I started getting sneered at by some of the people....Well it has been 20 years since high school...My outlook is much different now then it was back then.  I immediately told the individual who was being a jerk" Look sport..this ain't high school anymore...I will just beat your ass in front of your friends and call it a day...Now you decide how you want to roll."  he started making noise about some of his buddies backing him.  I dismissed them as "chickenshits and cowards" and they will vanish once the rubber meets the road.
Well they slinked away.  I did leave shortly afterwords..The experience left a bad taste in my mouth.  ..I had nothing in common with those people.   My wife knew that I was disturbed afterwards and I told her that I was sorry for going and wasting the money buying the ticket and the meal.  My wife didn't go, our son was a year old and she didn't want to leave him alone.  I am glad she didn't go with me, it would have pissed her off to see the jerks in action.  The people that I really cared about, I still keep in touch after high school.  I am now getting reminders about the 30th reunion....I will pass, some memories are best left buried. 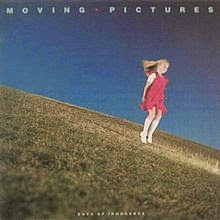 Days of Innocence is the debut album released by Australian band Moving Pictures in 1981. It spent 7 weeks at the top of the Australian Album charts in 1982. It spawned the 1982 number one single in Australia "What About Me".
The original 1981 version of the album was the fourth most popular album of the year in the band's native Australia, after Men at Work's Business as Usual, The Human League's Dare, and the soundtrack to Chariots of Fire. The collection features their biggest hit, "What About Me", which was the second biggest hit of 1982 in Australia, after Survivor's "Eye of the Tiger". Moving Pictures' hit won 'Best Single' at the 1982 Countdown Music Awards. In the U.S., "What About Me" was a top 30 hit during its lengthy first Hot 100 chart run in 1982, and narrowly missed hitting the top 40 a second time upon its re-release in 1989. A greatest hits album by the band is based entirely on Days of Innocence, plus new songs by Moving Pictures.


"What About Me" is a song written by Garry Frost and Frances Swan, first recorded by Australian rock band Moving Pictures from their album Days of Innocence. It was the band's first number-one single in Australia spending six consecutive weeks on the top; there, it was the second-highest selling single of 1982.
The success of the song led them to America where it became a hit, reaching #29 on the U.S. Billboard Hot 100 chart. The song stayed in the U.S. charts for such a long time that it managed to make Billboard's top 100 Pop Singles of 1983, at #88, a rare feat for a single with such a low peak position. The song made an unusual comeback in 1989, peaking at #46.


Frost wrote the song when he was working with autistic children in his day job. He had gone out to get lunch at his local shop in the Sydney suburb of Asquith and saw a small boy not being noticed waiting at the counter. He was sufficiently moved by the vision to write the song. The song was rarely played live by the band; when it was, it was played in a modern country style. It would never have been recorded but their debut album's producer Charles Fisher heard Frost and Smith tinkling with the tune on the studio piano during a break in recording. Fisher suggested that Moving Pictures record the song. It was initially released as a single in January 1982. It debuted on the charts during February and five weeks later reached #1, where it remained for six weeks, going on to become the second biggest selling single in Australia for 1982 (behind Survivor's "Eye of the Tiger") and went on to win the "Best Single" award at the 1982 Countdown Music Awards. "What About Me?" was released in the United States later in September 1982, reaching #29 and spending 26 weeks on the Billboard Hot 100. Because of its longevity on the Hot 100, the song was able to end up on the year-end chart at #88 in the U.S. It was re-released in the U.S. market in 1989 by Geffen Records, climbing to #46 at its second attempt.
Posted by MrGarabaldi at 8:59 AM