Monday Music "The Night the Lights went out in Georgia" From Vicki Lawrence.

I heard this song on the "70's"channel on my Sirius/XM when I headed off the 80's channel to avoid "red Red wine"...Again....*blech*.  And I haven't heard this song in years, literally it was a good 15 years plus since I heard this song.  I remember it being played a lot when I was a kid.  I never knew that the women that played "Little Sister" to Carol Burnett and had her own show called "Momma's Family".     Here is a clip from Tim Conway and Vicki Lawrence is featured here along with Carol Burnett and Dick Van Dyke in the "Elephant Story"


The Night the Lights Went Out in Georgia" is a Southern Gothic song, written in 1972 by songwriter Bobby Russell and sung by Vicki Lawrence, an American pop music singer, actress, and comedian. Lawrence's version, from her 1973 Bell Records album of the same name, was a number one hit on the Billboard Hot 100 after its release. In addition to several other renditions, the song was again a hit in 1991 when Reba McEntire recorded it for her album For My Broken Heart. McEntire's version was a single, as well, reaching number 12 on Hot Country Songs. 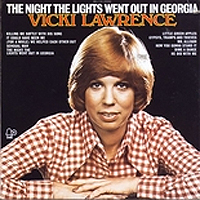 Returning home from a two-week trip to a place called Candletop, a man, identified only as "Brother", stops for a drink at Webb's Bar before going home to his wife. His friend Andy Woodlow stops in to inform Brother that while he's been away his wife has been having an affair with a man named Seth Amos. Brother is infuriated by this news, but his anger is exacerbated when Andy confesses that he too has been messing around with Brother's wife. Now in fear for his own safety, Andy leaves Webb's Bar and walks back to his house nearby.
Thinking his wife has left town, Brother goes home to find a gun and quietly makes his way through the woods to Andy's house to kill him. On the way there he finds a set of footprints leading up to and back from the house, but they look too small to have been made by Andy. Arriving at Andy's back door, Brother looks through the screen and discovers that Andy is already dead; he begins to panic when he sees Andy's blood-soaked body lying on the floor. Without thinking, Brother fires a shot in the air to flag down the police, only to be accused and arrested himself. In a show trial, the judge wastes little time declaring Brother guilty of Andy's murder and then sentencing him to death by hanging, which is carried out in short order.
The story wraps up with the narrator, revealing herself as "Little Sister", admitting that it was she who made the tracks that Brother saw leading to and from Andy's house. She then confesses that she not only shot and killed Andy, but also murdered Brother's unfaithful wife, making extra certain to dispose of her body where nobody would ever find it; the narrator finishes by saying "See, Little Sister don't miss when she aims her gun".
In the song's chorus, Little Sister blames the Georgia criminal justice system for Brother's death, warning the listener "Don't trust your soul to no backwoods Southern lawyer, 'cause the judge in the town's got blood stains on his hands.

Although Bobby Russell wrote both the lyrics and music for the song, he was reluctant to record even a demonstration because he "didn't like it." According to Lawrence, who was married to Russell at the time, she believed it was destined to be successful and recorded the demo herself. The publishers and the record label did not quite know how to pitch the song, as it was not really a country or a pop song. The first thought was to offer the song to actress/singer Liza Minnelli, but eventually it was offered to singer Cher, but her then-husband and manager Sonny Bono reportedly refused it, as he was said to be concerned that the song might offend Cher's southern fans. Without a singer to record the song, Lawrence went into a studio and recorded it professionally herself, with the instrumental backing of L.A. session musicians from the Wrecking Crew, then pressed the label to release it as a single.

Released as a single in June 1972, the song would ultimately become a number-one success for Lawrence, topping the Hot 100 chart in early 1973. Lawrence was, at the time, a regular performer on the ensemble variety comedy television show The Carol Burnett Show; on the final episode of the sixth season (March 24, 1973), Burnett surprised Lawrence by presenting her with an RIAA gold record for over a million copies sold. The song also scored number six on the Easy Listening chart,[4] and it peaked at number 36 on Billboard's Hot Country Singles chart. It was number one for two weeks on the Billboard Hot 100, and was finally topped by Tony Orlando and Dawn's "Tie a Yellow Ribbon Round the Ole Oak Tree". Billboard ranked it as the No. 11 song for 1973
Posted by MrGarabaldi at 12:00 AM