Monday Music "So Far away" by Dire Straits


I heard this song in 1985, I was between College and Army when the album "Brothers in Arms" came out and I seriously jammed on the song "Money For Nothing" (You can see one of my older Monday Music Following that link.)  Well this song I heard while I was at Fort Devens in Mass for AIT and I had a mix of songs that I had made with my stereo cassette player and played on a Sony Walkman knockoff and I ran through post in the evening and at night to give me something to do because I felt really alone there and I didn't relate to anyone.  It got better the longer I was there but the first few months were brutal.   The song to me was a good running song and did play well while I was jumping curbs and dodging potholes.

"So Far Away" is a 1985 rock song by Dire Straits. It appears on the album Brothers in Arms. It became the band's fourth and final top 20 hit (as well as top 40) on the Billboard charts, peaking at #19. The original studio version of the track appeared on the 2005 compilation The Best of Dire Straits & Mark Knopfler: Private Investigations. 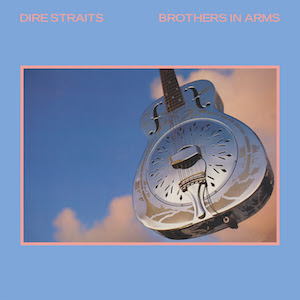 "So Far Away" was the lead single from Brothers in Arms in the UK and Europe on 8 April 1985. The song charted at #20 in the UK, but also reached the Top 5 in Norway (#4), Top 10 in Switzerland (#6) and Sweden (#7) and Top 40 in Italy (#33). The single was also released in Australia and peaked at #22.
After the song climbed to #29 on the Billboard Hot Mainstream Rock Tracks chart in 1985, "So Far Away" was released a year later as the album's third single in North America, where it peaked at #3 on the Hot Adult Contemporary Tracks chart and #19 on the Billboard Hot 100, giving Dire Straits a third consecutive Top 20 hit from Brothers in Arms on the Hot 100.