My New computer and "Swatting"

Before I get into what I am blogging about, first off the spousal unit got me a small "portable" computer.  I have until recently used my work tablet that my employer used for both work and play.  It  was a HP elitepad pro and I used it to look at IPC references(Illustrated Parts catalog) to order parts while I was working along with Aircraft maintenance references.  I also used the tablet for other things that were work related, I also had my kindle on it and used that to read books.  Well they decided a month ago to have all the mechanics return the tablets because HP wasn't supporting them anymore.  I had inquired about buying it because they had Windows 10 and Microsoft was supporting the operating system.  Well that went nowhere.   Oh Well. 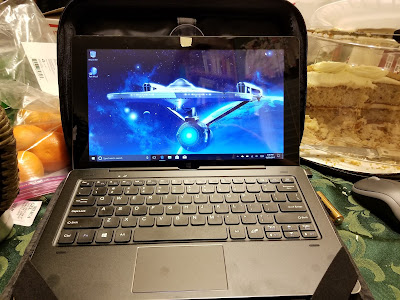 I ordered a protective case for the computer, I know me and I am clumsy.

On a different note, I will talk about SWATTING, it is a technique whereas someone contacts the authorities and makes a call usually involving people shot and hostages to provoke an overreaction by the authorities.  The calls are false but the Police don't know that and they roll in expecting the worst.

Well it did happen Wichita Kansas and one of the gamers tried to SWAT his opponent.  The full article is HERE

Here is a couple of screenshots of the twitter users

This one was made by the person that did the SWATTING

As was this one.

I have blogged about SWATTING in the past and we in Georgia had an incident where a man that was carrying whom happened to be black had someone make a call on him.  The local police dept didn't go in guns blazing and just had in interview with the CCW holder.  This ended well.  Many people of the antigun community have told others through twitter that they go out of the way to call the PoPo on people either open carrying or CCW hoping to provoke an overreaction to the call so the CCW or the open carry person gets shot.  This is a despicable tactic totally devoid of honor.


And here is another
People can die by this tactic.

Email ThisBlogThis!Share to TwitterShare to FacebookShare to Pinterest
Labels: Swatting