Disabling an MRAP for less than $50?

This article is published for educational purposes only.  This article in no shape form or fashion condoning taking out of MRAPS. Don't try this at home 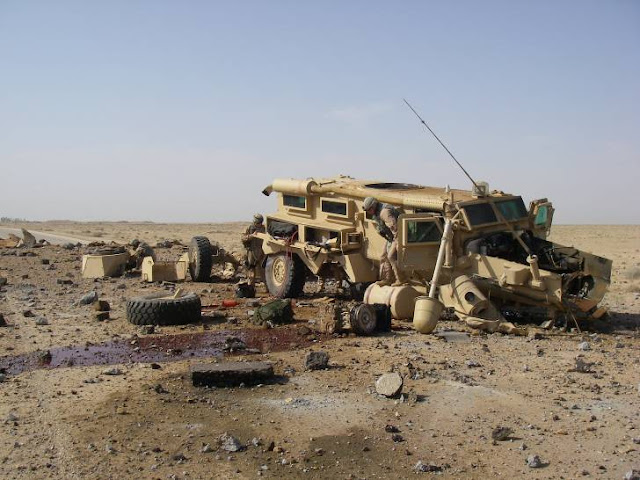 Washington, DC (TFC) – Police and military vehicles are stolen from time to time. Should a citizen be in a community where a military vehicle is stolen, it would be wise to understand how civilian populations throughout history have disabled military vehicles in the past. This article has absolutely nothing to do with the recent trend of police departments deploying armored vehicles against people exercising their Constitutionally-protected rights. Perhaps the reader travels overseas and a military crackdown erupts while they are drinking Pina Coladas on the beach.  The point is that this information should never be used against US law enforcement. That would be a violation of the social contract and you might end up in jail.
Most Americans are familiar with the Mine Resistant Ambush Protected (MRAP) vehicle because their local police department obtained one to look cool. Due to familiarity, this will be the vehicle used as an example. The same tactics will work against almost all other armored vehicles.

Molotov demonstration.
Image source: DOD
It is important to understand what a Molotov cocktail will not do. It will not “blow up” an armored vehicle. The set of circumstances required for an explosion to occur is so unlikely that it isn’t worth spending time addressing. It will not injure the occupants in most instances. There is an extremely rare, but worth mentioning, set of circumstances that has occurred in which insurgents threw several Molotovs at an armored car and for whatever reason the fluid did not light. Instead, it simply soaked the vehicle. The fumes from the flammable material seeped into the cabin through the gun ports and when a functioning cocktail hit the vehicle later it ignited all of the remaining fluid. The fumes inside the vehicle also ignited in a fireball, severely injuring the occupants.
Concluding remarks:
None of the methods or tactics described above included the use of high explosives, firearms, or anti-tank weapons. Using those tools, the vulnerabilities of armored vehicles are exponentially increased. Unshielded coolant lines, hydraulic lines, and air brake canisters make the MRAP good for one thing and one thing alone: protecting troops in combat from Improvised Explosive Devices (IEDs). It’s not even great at that. It is not a good raid vehicle. It is not a good vehicle for crackdowns.
The MRAP is a perfect case study in perceived capability vs actual capability. The perceived capability of the massive armored vehicle is that it can withstand anything. The actual capability of the vehicle is that it can be disabled by a kindergartner’s art supplies. Rest assured that no matter what banana republic you happen to be in, if the government orders a military crackdown or begins enforcing a police state, you can defeat their armored vehicles. Keep in mind, we never even discussed the ways to sabotage the vehicle while it’s parked overnight.

Note: This information provided for educational and entertainment purposes only. Please do not try this at home.
Posted by MrGarabaldi at 6:30 AM

Email ThisBlogThis!Share to TwitterShare to FacebookShare to Pinterest
Labels: bugaloo