I got this from here 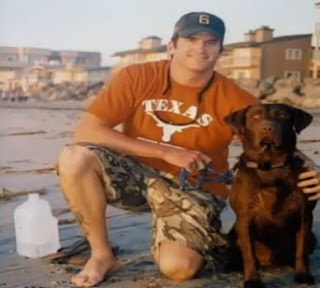 Here is a pic of them together

Pic Of The Day: Dog Keeps Watch Over Fallen SEAL’s Casket During Funeral…

If this doesn’t tug at your heart strings then you’re not human (or a liberal).

(Blaze) — Petty Officer Jon T. Tumilson was laid to rest Friday in Rockford, Iowa, where an estimated 1,500 mourners came to pay respects for the fallen Navy SEAL, including his dog Hawkeye. In fact, Hakeye’s loyalty to his owner at the funeral was visible, creating a heart-wrenching image as he laid down by the casket of his owner during the entire service.
The 35-year-old Tumilson died Aug. 6, when a rocket-propelled grenade disabled the helicopter he was in. It crashed, killing 30 Americans and eight Afghans. Fellow Navy SEALS told KIMT-TVthat Jon was someone with unmatched work ethic and character.
more here