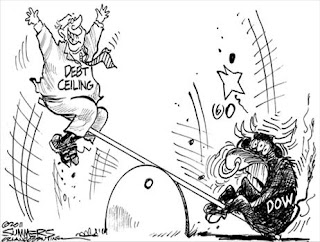 I got this from Yahoo finances..... more here 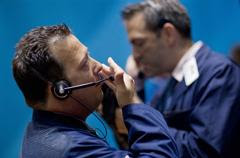 Traders work on the floor of the New York Stock Exchange on Thursday, Aug. 4, 2011 in New York. (AP Photo/Jin Lee)

Follow these stocks
David K. Randall, AP Business Writer, On Thursday August 4, 2011, 5:07 pm
NEW YORK (AP) -- Gripped by fear of another recession, the financial markets suffered their worst day Thursday since the crisis of 2008. The Dow Jones industrial average fell more than 500 points, its ninth-steepest decline ever.
The sell-off wiped out the Dow's gains for 2011. It put the Dow and broader stock indexes into what investors call a correction -- down 10 percent from the highs of this spring.
"We are continuing to be bombarded by worries about the global economy," said Bill Stone, the chief investment strategist for PNC Financial.
The day was reminiscent of the wild swings that defined the markets during the crisis three years ago. Gold prices briefly hit a record high, oil fell an extraordinary $5 a barrel, and frightened investors were so desperate to get into some government bonds that they were willing accept almost no return on their money.
It was the most alarming day yet in the almost uninterrupted selling that has swept Wall Street for two weeks. Since July 21, the Dow has lost more than 1,300 points, or 10.5 percent of its value. It has closed lower nine of the 10 trading days since then.
For the day, the Dow closed down 512.76 points, at 11,383.68. It was the steepest point decline since Dec. 1, 2008.
Posted by MrGarabaldi at 5:43 PM