I have a lot of problems with Ron Paul, besides the overzealous followers.  His world view seems simplistic and I have noticed that the LSM keeps trying to portray Paul as the mainstream of the Republican party. 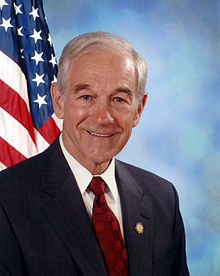 A reader asked me why I have such a low opinion of Rep. Ron Paul and his fan base. I gave him a rather lengthy answer, but my opposition to the candidate himself is summed up well enough in this reference from Rep. Allen West, who has a much better grasp of the way the  real world works.
Paul's "hand's off" philosophy if implemented after World War II, would have gleefully let Russia pile nuclear missile batteries in Cuba, and expand in Central and South America unopposed. It would have let the Iron Curtain extend fully over Western Europe, Africa, and the Korean peninsula. It would have certainly led to our decline as a world power, and quite possibly would have plunged free populations into tyranny, or even a third World War.
Simply put, Paul's beliefs, if implemented as policy, would constitute a clear danger to this nation's very existence.
My second objection to Paul is the cult-like followers he has attracted. That are every bit as zealous as the Obamites, and their constant screaming and yelling at events is off-putting (to put it mildly). I've seen enough of cult-leaders with destructive policy agendas. No more.
I'd contemplate sitting at home if it came down to Paul versus Obama. Sadly, I suspect more Americans would simply vote for Obama again in a landslide, assuring our fiscal collapse.

Posted by MrGarabaldi at 8:26 PM