Rick Perry and changing the constitution

I got this off here

I will add my comments in RED 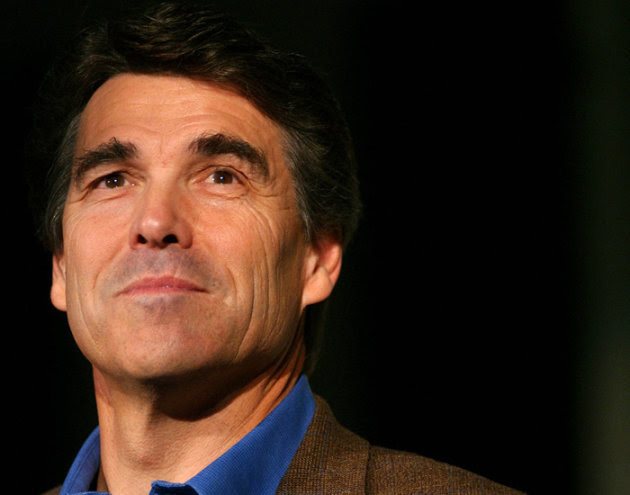 (Kelly West/AP)
Rick Perry has many ideas about how to change the American government's founding document. From ending lifetime tenure for federal judges to completely scrapping two whole amendments, the Constitution would see a major overhaul if the Texas governor and Republican presidential candidate had his druthers. Perry laid out these proposed innovations to the founding document in his book, Fed Up! Our Fight to Save America from Washington. He has occasionally mentioned them on the campaign trail. Several of his ideas fall within the realm of mainstream conservative thinking today, but, as you will see, there are also a few surprises.
1. Abolish lifetime tenure for federal judges by amending Article III, Section I of the Constitution.
The nation's framers established a federal court system whereby judges with "good behavior" would be secure in their job for life. Perry believes that provision is ready for an overhaul.
"The Judges," reads Article III, "both of the supreme and inferior Courts, shall hold their Offices during good Behavior, and shall, at stated Times, receive for their Services a Compensation which shall not be diminished during their Continuance in Office."
Perry makes it no secret that he believes the judges on the bench over the past century have acted beyond their constitutional bounds. The problem, Perry reasons, is that members of the judiciary are "unaccountable" to the people, and their lifetime tenure gives them free license to act however they want. In his book, the governor speaks highly of plans to limit their tenure and offers proposals about how to accomplish it.
"'[W]e should take steps to restrict the unlimited power of the courts to rule over us with no accountability," he writes in Fed Up! "There are a number of ideas about how to do this . . . . One such reform would be to institute term limits on what are now lifetime appointments for federal judges, particularly those on the Supreme Court or the circuit courts, which have so much power. One proposal, for example, would have judges roll off every two years based on seniority."
I tend to agree, the activist judges that legislate from the bench goes against the intent of our 3 branches of government.  The Legislature proposes the law, not the judiciary.
2. Congress should have the power to override Supreme Court decisions with a two-thirds vote.
Ending lifetime tenure for federal justices isn't the only way Perry has proposed suppressing the power of the courts. His book excoriates at length what he sees as overreach from the judicial branch. (The title of Chapter Six is "Nine Unelected Judges Tell Us How to Live.")
Giving Congress the ability to veto their decisions would be another way to take the Court down a notch, Perry says.
"[A]llow Congress to override the Supreme Court with a two-thirds vote in both the House and Senate, which risks increased politicization of judicial decisions, but also has the benefit of letting the people stop the Court from unilaterally deciding policy," he writes.
I would go with 3/4 overide, to make it more difficult, the judicial branch is to intrepret the constitution to its meaning and uphold the law.  The 3/4 vote will make it difficult for the legislature to overturn a ruling to prevent the legislature from acting in a fit of emotion.
3. Scrap the federal income tax by repealing the Sixteenth Amendment.

The Sixteenth Amendment gives Congress the "power to lay and collect taxes on incomes, from whatever source derived, without apportionment among the several States, and without regard to any census or enumeration." It should be abolished immediately, Perry says.
Calling the Sixteenth Amendment "the great milestone on the road to serfdom," Perry's writes that it provides a virtually blank check to the federal government to use for projects with little or no consultation from the states.
Fair tax or flat tax, abolish the IRS and vastly simplify the tax code
4. End the direct election of senators by repealing the Seventeenth Amendment.

Overturning this amendment would restore the original language of the Constitution, which gave state legislators the power to appoint the members of the Senate.
Ratified during the Progressive Era in 1913 , the same year as the Sixteenth Amendment, the Seventeenth Amendment gives citizens the ability to elect senators on their own. Perry writes that supporters of the amendment at the time were "mistakenly" propelled by "a fit of populist rage."
"The American people mistakenly empowered the federal government during a fit of populist rage in the early twentieth century by giving it an unlimited source of income (the Sixteenth Amendment) and by changing the way senators are elected (the Seventeenth Amendment)," he writes.
This would restore the balance in our federalist system, the senators would represent the states interest rather than becoming vassels of an overreaching federal system.
5. Require the federal government to balance its budget every year.
Of all his proposed ideas, Perry calls this one "the most important," and of all the plans, a balanced budget amendment likely has the best chance of passage.
"The most important thing we could do is amend the Constitution--now--to restrict federal spending," Perry writes in his book. "There are generally thought to be two options: the traditional 'balanced budget amendment' or a straightforward 'spending limit amendment,' either of which would be a significant improvement. I prefer the latter . . . . Let's use the people's document--the Constitution--to put an actual spending limit in place to control the beast in Washington."
A campaign to pass a balanced budget amendment through Congress fell short by just one vote in the Senate in the 1990s.
Last year, House Republicans proposed a spending-limit amendment that would limit federal spending to 20 percent of the economy. According to the amendment's language, the restriction could be overridden by a two-thirds vote in both Houses of Congress or by a declaration of war.
YES!!!!!!!!!!!!!!!!!!!!! and reform entitlements
6. The federal Constitution should define marriage as between one man and one woman in all 50 states.
Despite saying last month that he was "fine with" states like New York allowing gay marriage, Perry has now said he supports a constitutional amendment that would permanently ban gay marriage throughout the country and overturn any state laws that define marriage beyond a relationship between one man and one woman.
"I do respect a state's right to have a different opinion and take a different tack if you will, California did that," Perry told the Christian Broadcasting Network in August. "I respect that right, but our founding fathers also said, 'Listen, if you all in the future think things are so important that you need to change the Constitution here's the way you do it'.
In an interview with The Ticket earlier this month, Perry spokeswoman Katherine Cesinger said that even though it would overturn laws in several states, the amendment still fits into Perry's broader philosophy because amendments require the ratification of three-fourths of the states to be added to the Constitution.
Republicans need to run as fiscal conservatives, the social stuff can wait until our house is in order.  This will stampede the independents right into the the Obungler's camp for 2012.   What 2 people do in their bedroom is their business,not the government.
7. Abortion should be made illegal throughout the country.
Like the gay marriage issue, Perry at one time believed that abortion policy should be left to the states, as was the case before the 1973 Supreme Court case Roe v. Wade. But in the same Christian Broadcasting Network interview, Perry said that he would support a federal amendment outlawing abortion because it was "so important...to the soul of this country and to the traditional values [of] our founding fathers."
Republicans need to run as fiscal conservatives, the social stuff can wait until our house is in order.  This will stampede the independents right into the the Obungler's camp for 2012.    The LSM and the democraps will paint all the republicans with this statement and this will also stampede the independents to Obungler in 2012.  I don't like abortion, but it is the personal choice that all people have and the government will be legislating morality and this goes against the concept of limited government.

Rick Perry just marginalized his election chances and boosted the democraps and their 2012 chances.
Posted by MrGarabaldi at 7:50 PM