I got this off the DOD BUZZ. 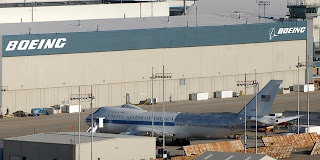 I have several thoughts on this.  1.  I know what it is like to get my job shut down and the plant that I worked at gone.  That sucks.   I also wonder if this is part of the union negotiations and the fallout from the NLRB action.  Part of the reason for the location of this facility that built B-17's, B-29's B52's and many other aircraft is the fact that it is dead center of this country, it was safer from attack.  It pains me to see this for this is good manufacturing jobs that are going and once those skills and equipment are gone, they can never replace it.  Especially in this business climate where you have to have an environmental study to build anything here.

In what may be a harbinger of the immediate future for the aerospace industry, Boeing just announced that it’s closing its Wichita, Kan., facility, home to its B-52 and KC-767 military programs, next year.
Boeing claims the plant is being closed due to a lack of future business opportunities for the site that also serves Boeing’s global transport and executive services arm (basically military VIP jets like Air Force One). “Business costs in Witchita are not competitive” in the maintenance, modifications and upgrades (MDS) business sector, said Mark Bass, Boeing Defense Space & Security’s VP for MDS during a conference call to discuss the plant closure.
“We know that there are many more difficult decisions [like this one] ahead of us,” added Bass.
The Wichita plant relies on maintenance modifications and upgrades contracts for older military jets. But, “over the last 18 months, the military market has changed dramatically,” said Bass. The “market is flat or declining” and  the MDS business arena “is very competitive and we compete against a number of smaller companies” and due to its enormous size, “Wichita is just not competitive” in the MDS arena, according to Bass.
Boeing’s 767-based KC-46 tanker program will now be based out of facilities around Puget Sound, Wash. This will put the facilities that turn 767s into KC-46s much closer to the Everett, Wash, plant that makes the 767.
Keep in mind that Boeing may take a loss making the first batch of 17 KC-46 tankers that it is making for the U.S. Air Force. This is because the company underbid EU subsidized rival EADS in the KC-X contest (the competition was often described as a price shootout) in order lock-in future contracts for the 179-plane KC-46 program that it will be able to turn a profit on.
“If we left the tanker here it would become unaffordable to our customer because the rest of the site would corrode,” added Bass. He would not discuss contracts that are winding down in Wichita. “It’s primarily the facilities and infrastructure costs here in witchita” that are leading to “tremendous inefficiencies.”
He went on to say the company’s competitiros in the maintenance and mods arena operate with “just two hangars and an office building” while Boeing’s two million square foot Wichita plant has 97 buildings.
“Labor costs are higher here than at our other sites,” he added.
Boeing executives made the decision to close the plant on December 30 after conducting a study last year to determine whether or not the facility should remain open, according to Bass, who said that officials had no idea that the facility would be closed when the KC-X contest was awarded last year. A local TV reporter on the conference call just pointed out that Boeing claimed last year that a KC-X victory would provide over 7,000 jobs in Kansas before asking increduclousy, “how can anyone in Kansas trust anything Boeing says anymore?”
Boeing estimates that 1,100 to 1,400 new jobs at company facilities in Oklahoma City and San Antonio will help offset the closure, according to Bass. There are 2,150 workers currently employed at the Witchita site. 200 jobs will be created at Boeing facilities around Puget Sound when the KC-46 tanker program moves there.
The legendary Wichita plant is co-located with McConnell Air Force Base, and produced everything from B-29s (shown above) to B-52s. (It’s where my old man checked out in B-47s)
Here’s the text of Boeing’s announcement of the facility’s closure:


The Boeing Company [NYSE: BA] today announced that the Boeing Defense, Space & Security (BDS) facility in Wichita will close by the end of 2013. The Wichita facility currently employs more than 2,160 employees.
“The decision to close our Wichita facility was difficult but ultimately was based on a thorough study of the current and future market environment and our ability to remain competitive while meeting our customers’ needs with the best and most affordable solutions,” said Mark Bass, vice president and general manager for BDS’ Maintenance, Modifications & Upgrades division. “We recognize how this will affect the lives of the highly skilled men and women who work here, so we will do everything possible to assist our employees, their families and our community through this difficult transition.”
Boeing Wichita is the base for the company’s Global Transport & Executive Systems business and its B-52 and 767 International Tanker programs. The facility also provides support for flight mission planning and integrated logistics.
Over the past five years, contracts in Wichita have matured, programs have come to a close or are winding down, and the site does not have enough sustainable business on the horizon to create an affordable cost structure to maintain and win new business.

Bass said that Boeing will continue to have a significant impact on the Kansas economy and the health of the state’s aerospace industry.
“The company spent more than $3.2 billion with approximately 475 Kansas suppliers in 2011, spanning its commercial and defense businesses, making it the fourth largest state in Boeing’s supplier network,” said Bass. “Based on Boeing Commercial Airplanes growth projections for the next few years, Boeing anticipates even more growth for suppliers in Kansas. Boeing values its long-term partnership with Kansas, and we will continue to work with all of our stakeholders in Kansas in support of a robust aerospace industry in the state.”
Future aircraft maintenance, modification and support work will be placed at the Boeing facility in San Antonio. Engineering work will be placed at the Boeing facility in Oklahoma City. Although work on the KC-46 tanker will now be performed in Puget Sound, Wash., the 24 Kansas suppliers on the program will be providing vital elements of the aircraft as originally planned.
Boeing is providing employee assistance including retirement seminars, job search resources, and financial counseling, as well as help finding jobs inside or out of Boeing 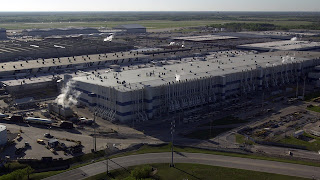