I am at fault in this, I and many others practice for shooting at 21 foot Rule, unless we are using a rifle.  I always heard of the 21 foot rule and I always practiced it, it is my "Combat distance, it is how I and I am sure many others have trained to draw and shoot a pistol. 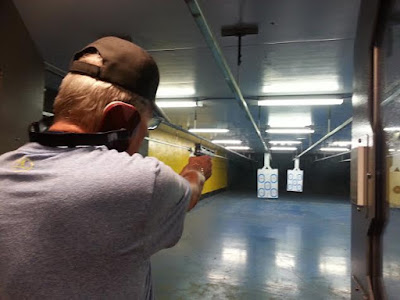 Using a pic of my Dad shooting at 21 feet(ish)
I suppose part of the reason for that is anything past 50 feet is kinda hit or miss with a pistol unless you have one of those tuned up "raceguns".  But I recall the 21 foot rule being a standard especially if somebody has a knife and coming at you.

Massad is a legend in the gun community, I remembered reading his articles and books in American Rifleman and other gun magazines.  He always talked about "Self Defense"and how to handle yourself when talking to the police or the court system.  I remembered something he said a long time ago when you are discussing pistol calibers and bullets, he always said that you stick with the basic facts, for example "Service Pistol ammunition, not ".357 magnum full metal jacket hollow point."  That second comment might pardon the phrase "trigger a Jury or a political minded district attorney." and cause one more trouble. 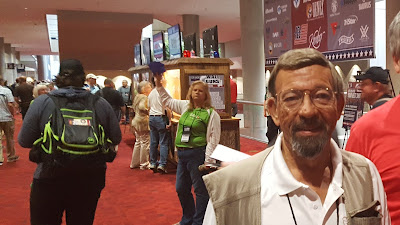 Massad Ayoob in Atlanta NRAAM 2017.  I was honored to meet him and a bunch of other people in my first NRAAM last year, that is part of the reason I looked forward to going to Dallas this year and next year in Indianapolis 2019.  I already have my hotel room reserved.

Too many people in both LEO and non-LEO circles have needlessly gotten themselves killed or injured because they mistakenly believed the Tueller Drill (a.k.a., "the 21-Foot Drill") is somehow a "rule." It is NOT a rule of any kind. It is ONLY a drill.

To quickly clarify, in March 1983, SWAT Magazine published an article by then-Salt Lake City (UT) Police Sergeant Dennis Tueller entitled How Close is Too Close? The article revealed that the average individual closed a gap of 21-feet in 1.5 seconds. Some younger and healthier individuals closed that gap faster; some older and less-healthy individuals closed that gap slower. But the AVERAGE individual closed it in just 1.5 seconds.

There is NO rule or law or policy that precludes a LEO or non-LEO who is in reasonable fear of death or serious bodily injury to him or herself or others from drawing and firing at an assailant positioned more than 21-feet away. Indeed, the point of the article is that if you have waited until the assailant is at, much less within 21-feet you have likely waited too long to draw and fire your weapon -- so you had damn well better have other skill sets to protect your life and the lives of those around you.

As in the children's game "Telegraph," over time this simple fact has often been misunderstood as being some make-believe "21-foot rule." NO SUCH RULE EXISTS!

In the 35 years since Sgt. Tueller's article first appeared, countless techniques have been developed by LEO and non-LEO self-defense trainers to both get the student off the X in order to give him or herself more time and distance to react to an attack with a contact weapon, as well as giving the student more skills with which to react.
Posted by MrGarabaldi at 5:30 AM