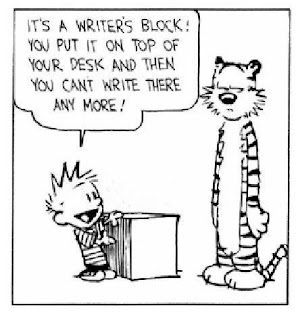 Writer's block is a condition, primarily associated with writing, in which an author loses the ability to produce new work, or experiences a creative slowdown. The condition ranges in difficulty from coming up with original ideas to being unable to produce a work for years. Throughout history, writer's block has been a documented problem.
Professionals who have struggled with the affliction include authors such as F. Scott Fitzgerald and Joseph Mitchell, comic strip cartoonist Charles M. Schulz, composer Sergei Rachmaninoff,and songwriter Adele. Research concerning this topic was done in the late 1970s and 1980s. During this time, researchers were influenced by the Process and Post-Process movements, and therefore focused specifically on the writer's processes. The condition was first described in 1947 by psychoanalyst Edmund Bergler. However, some great writers may have already suffered from writer’s block years before Bergler described it, such as Herman Melville, who quit writing novels a few years after writing Moby-Dick.


Yeah, I pulled this from Wiki, I have some great ideas for a blog post and once I get in front of the computer, the good ideas vanish like the morals of a democratic politician.....

I have gone through this before...I always come back though....I know it happens to everyone and I am glad that I don't have to depend on my writing for an income...cussing at airplanes pays better, LOL.
Posted by MrGarabaldi at 11:30 AM