I remembered reading about Task Force Smith and how a bunch of "occupation" soldiers with poor equipment got rolled up by the North Koreans.  Since the Korean War it has been canon that there will be "No More Task Force Smith".   I remember us in Europe training hard even though we were in "Peacetime", there always the possibility of going to war and the training came in handy when we got sent to the middle East on a reverse REFORGER.  From the report the units of TF Smith performed as well as any units in U.S. History, the higher up in the chin of command were more to blame than the TF itself, the institute of advanced studies stated that the fault from MacArthur on down gave the task force impossible tasking orders and set them up for failure.  Please read the link at the end of the posting. it is long and really good reading. 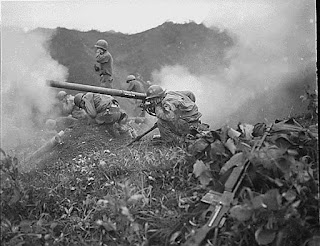 Task Force Smith was composed mostly of men under 21 years of age, and before war broke out in Korea on June 25, 1950, its experience involved little more than garrison duty in Japan. Few of its members had been in combat.
The troops of Task Force Smith weren’t unlike most other G.I.s of their day — laid-back, under-trained and perhaps too accustomed to peacetime. Author T.R. Fehrenbach described them as “probably as contented a group of American soldiery as had ever existed.”
“It was not their fault that no one had told them that the real function of an army is to fight, and that a soldier’s destiny — which few escape — is to suffer, and if need be, to die,” wrote Fehrenbach, who was a combat officer in Korea.


What America needed Task Force Smith to do in the summer of 1950 was blunt North Korea’s rapid southward advance as long as possible. It became the first American unit to meet the North Koreans in ground combat.
“In all American history, no group of soldiers has displayed greater bravery and dedication than the mostly untried members of Task Force Smith,” author Bevin Alexander wrote.
The Formation of Task Force Smith
Task Force Smith consisted of 406 men from the 1st Battalion, 21st Regiment, 24th Infantry Division, and 134 men from Battery A of the 52nd Artillery Battalion.


When the North Korean onslaught began with smashing success, the 24th was the first U.S. division sent to Korea, and Lt. Col. Charles B. Smith’s battalion was in the vanguard. Smith headed to Korea with just two rifle companies, which were under-strength, and some headquarters, communications, and heavy weapons troops.
After a long journey that included travel by plane, truck, and train, Smith’s troops were joined on July 4 in Pyongtaek by the artillerymen of Lt. Col. Miller O. Perry, who brought six 105-millimeter pieces, with 1,200 rounds of ammunition.
The combined infantry/artillery unit was dubbed Task Force Smith. Its men were optimistic heading into battle. They had no idea of the long odds they faced.


Task Force Smith Fails to Stop North Korean Tanks
Task Force Smith was trucked 12 miles north from Pyongtaek, moving to a position three miles beyond the village of Osan on July 4. The group dug in on high ground that overlooked the highway and a railroad to the east.
At 7:30 a.m. on July 5, a line of North Korean tanks churned into view, and the Americans let loose with all of the heavy weapons they had, which in the grand scheme of things weren’t much.


While Perry’s artillerymen had a decent supply of high-explosive shells, they possessed only six rounds of armor-piercing ammunition. Smith’s “battalion” could add just two 75-millimeter recoilless rifles and six bazookas. That was not nearly enough firepower to stop the North Korean force of Russian-made T34 tanks, which smashed through Task Force Smith’s position.
Most of the hits scored by the Americans bounced off the T34 armor, and the North Koreans continued south after inflicting 23 casualties, destroying a handful of U.S. vehicles, and knocking out a forward 105 howitzer position. There was a temporary panic among the artillery crews, but it was brought under control well before any enemy infantry arrived.


Task Force Smith Battles North Korean Infantry
An hour after the tanks passed through, the Americans spotted a six-mile column of North Koreans with three more T34 tanks leading the way. Behind them were some 5,000 infantry — two regiments. The North Koreans were unaware of the American positions and were predictably surprised when Smith’s troops opened fire at 11:45 a.m. Trucks exploded, some men fell, and the rest scattered in different directions.
But unlike the tank column that broke through hours earlier, this North Korean force directly engaged the Americans. The Communists began spreading around the flanks. And with their huge numerical superiority — and ample mortar and artillery support — they proved to be an insurmountable force.
Smith ordered his force to withdraw before it was surrounded, and the task was accomplished with great difficulty. The Americans suffered most of their 150 casualties during the retreat. Task Force Smith had delayed the North Koreans for a total of seven hours — at the cost of 20 killed, and 130 wounded or missing.


The Legacy of Task Force Smith
Task Force Smith is not a name that is synonymous with triumph in U.S. military annals. To some, it is a symbol of failure and unpreparedness — a model for future generations not to emulate. Task Force Smith did not have enough men, training, supplies, or ammunition when it entered combat, yet somehow it was called upon to perform a monumental task.
Yet it’s difficult to fault the men of the task force, who, under the circumstances, performed better than perhaps anybody had a right to expect. Their fight lasted only hours, but as the U.S. struggled to assemble additional troops in Korea and every hour was critical.
In 2005, a monument to Task Force Smith was erected near the battle site, almost exactly 55 years after the engagement.

Here is a REPORT that the U.S. Army institute for advanced studies and lessons learned
Posted by MrGarabaldi at 7:00 AM