The U.S.S Pueblo and the Hawaiian" Good luck sign"

I have blogged before about the U.S.S Pueblo and I got into a discussion on facebook right after the U.S/NK Summit and people were wondering why didn't Trump ask for the Pueblo back.  My attitude back then and now was that we should have sunk the ship by limpet mine or tomahawk strike rather than the ship be used as a prize for an illegal seizure.  The NORKS in the past especially in the late 1970's caused several incidents pushing the Americans, they figured that we were weakened after Vietnam.  I honestly believed that President Trump was able to have a summit with Kim Jon-un because he treated the NORKS differently.  The NORKS were used to playing all the professional politicians that the Americans had from Bill Clinton, Bush and Obama.  President Trump is not a professional politician and he didn't react like they expected him to.    But I digress, This story is about the "Hawaiian Good Luck Sign" and how it came to be.

I had this on my scheduler thingie and apparently this article duplicated itself on the blog posting.  I corrected it 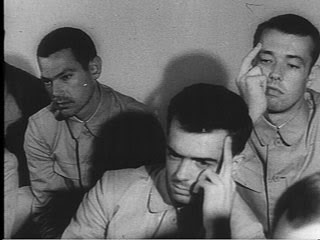 The Hawaiian" Good Luck Sign"
In 1968, North Korea seized a US Navy ship, held its crew for almost a year, and tortured them. To free themselves, the captives had to do something unusual – repeatedly insult North Korea. For that outrage, the US government nearly punished the ship’s officers.
Lloyd Mark “Pete” Bucher was born in Idaho in 1927. When WWII broke out, he dropped out of school to enlist. In 1949, Bucher got into college on a football scholarship while keeping himself on the Naval ROTC. Upon graduating in 1953, he became a commissioned Ensign in the US Naval Reserve.
Bucher rose through the ranks and served aboard ships and submarines. He was passionate about the latter and dreamed about commanding one, but it was not to be. He was assigned as captain of the USS Pueblo (AGER-2) – a spy ship with a top speed of 12.7 knots (14.6 mph), armed with only two M2 Browning 0.50-caliber machine guns.

Edward R. Murphy, Jr. was born in California in 1937. Upon graduating from college in 1960, he entered the US Navy and was later assigned to the Pueblo as Bucher’s executive officer and navigator.
He would also write Second in Command – a first-hand account of the incident. Murphy’s book contradicts Bucher’s own version as described in Bucher: My Story.
According to military psychologists, Bucher tended to get overly-attached to his men – one of many reasons he was denied command of a battleship. While this made him popular among the lower ranks, the Pueblo’s five other officers felt differently.


Stationed at the US Navy base in Yokosuka, Japan, Bucher allegedly brought bar girls aboard the Pueblo. Though forbidden, that was not the issue. What was at issue was his habit of taking them into sensitive areas where even the lower ranks were banned. This put Bucher at odds with the senior officers who wanted his security clearance revoked.


On January 5, 1968, the Pueblo set off to conduct an “environmental study” en route to another American base at Sasebo (also in Japan) with orders “not to be cowboys.” It was to be a training mission only. If trouble broke out, they were to retreat.

As a spy ship, they had a substantial amount of secret documents and advanced technology aboard. Protocol, therefore, required they have TNT (to blow the ship up) and thermite (to melt metal quickly) should they be captured. There was only one problem – the Navy had none to spare.


According to Bucher, he pooled money from the crew and bought an incinerator. Murphy claims they did not know about the lack of TNT and thermite until they were at sea, so he contacted Yokosuka. The base promised to airlift the TNT and thermite to them but never did. Six days later, Pueblo headed north through the Tsushima Strait toward the Sea of Japan.
They met the North Koreans, instead – a submarine chaser on January 20, followed by two fishing boats two days later. Murphy suggested returning to base, but Bucher wanted to continue the mission and accused his second-in-command of cowardice.
On January 23, another North Korean submarine chaser confronted them and demanded to know their nationality. Pueblo raised the American flag and continued on. The North Koreans ordered them to stop, but Bucher refused.


The sub chaser fired warning shots. Three more showed up, as did two M9G-21 fighter planes. There was no way the Pueblo could outrun them. On board its machine guns were protected by tarpaulin and the strings covering them were frozen stiff. Worse, the machine guns had not been properly calibrated for the weather and were acting up.
Bucher insisted the Pueblo was nothing more than a research vessel in international waters and refused to stop. He was trying to buy time needed to destroy documents and contact base.
The Seventh Fleet Command at Kamiseya promised to come to the Pueblo’s rescue but never did. The North Koreans were losing their patience and tried to board the ship, but Bucher would not stop.


At about 2:30 PM (Korean time) the North Koreans fired – killing Fireman Duane Hodges and injuring several more. Twenty-five minutes later, they boarded the Pueblo. The men were taken to a POW camp, and though Bucher was the captain, Murphy was singled out.
North Korea’s military follows the Soviet model. According to that system, the second-in-command is a political officer who answers directly to the Politburo. To break him, Murphy was kept next to the interrogation room so he could hear everything that was going on.
There were periods when the men were treated well. Once healed, they were made to pose for group pictures. To show the world that they were not cooperating willingly, the men posed with their middle fingers raised. When asked what it meant, Bucher said it was the Hawaiian good luck sign – which pleased the North Koreans.


That was until Time magazine’s October 18, 1968, edition which explained what the sign actually meant. The beatings started again, and the men were denied food. Many never recovered. Bucher, who entered North Korea weighing 200 pounds, left it weighing barely 128.
When they threatened to shoot his men before him, however, Bucher finally broke. He went on TV and his confession reads, in part:
… this bowel wrenching confession is attested to by my fervent desire to paean (pronounced “pee on”) the Korean People’s Army… I therefore swear the following account to be true on the sacred honor of the Great Speckled Bird…


… we had traversed Operation Areas Mars, Venus, and Pluto, so named because like the planets, the Democratic People’s Republic of Korea is really far out… we had to find out how [North Korea had become]… number one… As we went about detecting this valuable information, particularly the oceanic salinity, density, ionic dispersion rate, humpback whale counts, both low and high protoplasmic unicellular euglena and plankton counts…
He then signed it, So help me, Hanna.
American officials struggled to keep a straight face. North Korea was impressed by such a sincere and detailed confession, but demanded an official apology from the US government, as well. It was given, and the prisoners were finally released on December 23, 1968… whereupon the US retracted the apology.


The capture of the Pueblo was considered to be the greatest breach of state secrets since John Anthony Walker (and later, Edward Snowden). Which was why Bucher and his officers were to be court-martialed. A public outcry prevented that, however, so instead they got Purple Hearts.
The Pueblo is still a commissioned ship of the US Navy… even though it is also a tourist attraction in Pyongyang, North Korea.