The perils of Command


I saw this on ASO(Angry Staff Officer), I got turned to this guy a while back because of Mack, so blame him, LOL.  I am working on a posting but I ran out of time and I am in the middle of my work schedule.    The article is from ASO, and the pics are compliments of "Google"

It’s been awhile since I’ve posted anything on here. And for that, I blame command, which sucks away all the years of your life. It’s basically “The Machine” from Princess Bride, just with more soldiers with DUIs.
However, the topic of command is fascinating in and of itself. Especially when one examines the span of control that modern commanders are looking at when compared to past high intensity conflicts. And of course for an opening example, I turned to Star Wars.
During Star Wars: the Empire Strikes Back, Darth Vader appeared in active command of the joint Imperial force that attacked Hoth. While he had a ground commander in the person of General Veers, the Sith lord retained control over naval operations – including  battlefield firing/chokings and promotions. Now, the Imperial Army and Navy were massive; the task force attacking Hoth was merely a small portion of the total force. Granted, the attack was considered decisive to defeating the decentralized Alliance forces as the Hoth system contained a significant number of Alliance high value targets. His presence in this operation was not an aberration – Vader was present in a tactical and operational command capacity at Scarif and Yavin IV. He even piloted a ship during the defense of Death Star I. But even so, these actions would be akin to George Marshall personally overseeing the Sicily landings in World War II. General Grant and his staff
As weird as that analogy is, it’s not as off base as one would expect. In fact, it actually appears in U.S. history; during the Civil War, the general-in-chief of the Union armies, General U.S. Grant accompanied a field army in campaign. His presence with the Army of the Potomac during the 1864-1865  Overland campaigns meant that he did not need to rely on subordinates to feed back information – he could observe directly. It also meant that his land forces commander, General George S. Meade, felt entirely micromanaged and put upon.
What both of these examples have in common is the difficulty that is inherent in managing massive military organizations and commanding them in battle. For the U.S. military, this issue was particularly difficult during the 20th century. Because other than the Civil War, the majority of U.S. military actions were conducted with fewer than 15,000 troops under one direct tactical or operational command. And then World War I happened, where the basic maneuver element – the division – consisted of 28,000 men. No one had ever commanded an element this large. And by the end of 1917 there were five U.S. divisions in France, over 150,000 men. One year later there were two million men, in 44 divisions. Simply put, no one knew how to move or fight these organizations. It would all have to be by trial and error. 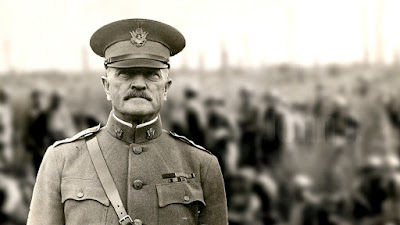 General John J. Pershing
The man chosen to lead this experimental force was General John J. Pershing. Pershing’s model for his campaigns on the Western Front was Grant’s Overland Campaign in 1864, based off of how Grant used large-scale maneuver to his advantage and kept moving on. However, Pershing also believed that open warfare would be the key to breaking what he saw as a stagnant Western Front. Now, while Pershing had many qualities that were admirable – his insistence in keeping the American Army together, for example – he also had many that were less than so. One was his insistence that what had plagued the French for so long was a lack of aggression and willingness to use the rifle. He saw French troops making raids with pistols, grenades, and trench knives and thought that it indicated that they had given up on maneuver warfare. He resolved to solve this problem in his own troops. In their train-ups for front line duty, U.S. divisions were given instructions in open warfare and were told that the rifle would be the dominant force that would win the war. 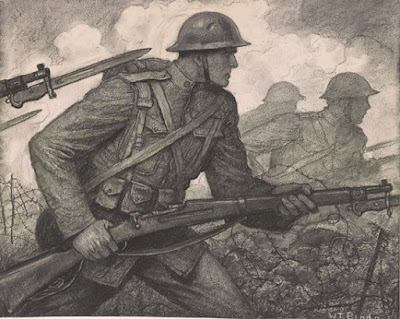 U.S Army on the Attack in WWI
When the U.S. Army finally went on the offensive in the summer of 1918, they went in with the rifle and the bayonet. And the casualties were dreadful. Regiments staggered out of the carnage along the Marne with 50% casualties. Which is what any of the French observers could have told them would happen, having seen the same thing in their own battles of the previous three years. The Americans would eventually catch on to the way that the French and Germans – especially the Germans – were fighting: infiltration tactics whereby groups of highly trained soldiers enveloped enemy strong points after a blistering artillery barrage, often supported by tanks and ground attack or intelligence aircraft. The Germans had perfected this kind of warfare on the Eastern Front in 1917 and used it to good effect on the Western Front in 1918. 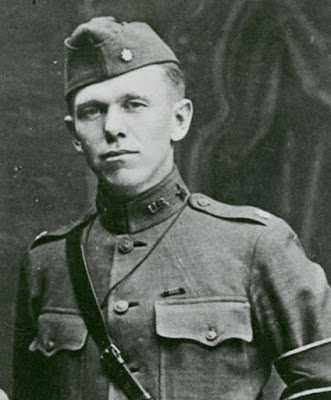 George C. Marshall
But Pershing did not see this right away – nor would he listen to what his division commanders would tell him. The American Expeditionary Force headquarters in Chaumont became the bane of division commanders’ existence – orders issued forth and very little advice was taken. The exception would of course be George C. Marshall, who did his best to mediate between Pershing and his division commanders, soothing egos and making plans. And he also took notes on the lessons that this brand new U.S. Army was learning, at times painfully. Because Pershing considered himself another U.S. Grant, issuing forth a stream of orders from Chaumont and threatening division commanders with relief if they did not fulfill them to the letter – which he on occasion did. While he didn’t force choke anyone, he applied a similar leadership model of fear. Simply put, Pershing was struggling with the age-old problem of command: how much of an army is too much for one man to command? And how best does one lead it?

Pershing chose to go down the path of micromanagement, with complex and precise orders which were duplicated down to the army, corps, and division level. This was compounded by the massive formations that commanders were leading, resulting in lost time, lost chances, and more casualties. Compare this to the German concept of auftragstaktik, mission command, where junior leaders were given the encouragement to seize the initiative when able. Fortunately, the Germans were facing logistical and manpower shortages; and the fighting spirit of the U.S. serviceman overcame many staff-level deficiencies.
If Pershing was daunted at the number of men under his control, his problem was nothing compared to what would face the War Department in World War II. Pershing at least was able to collect the majority of his command on one continent and could literally make the auto trip to 90% of his divisions in one or two days. Marshall, now Army Chief of Staff, looked out on a situation where the Army would be deployed across five continents. And not just the Army – to even get at the Japanese, the Army would be dependent on the Navy. And with an insurgent Army Air Corps, the services were nearing dangerous levels of disjointedness – pardon the puns – at an incredibly dangerous time. And then there were the Allies – partnerships that not only included troops, aircraft, and ships but supply lines, treaties, and subordination of commands. This caused the formation of headquarters groups with acronyms longer than your arm. 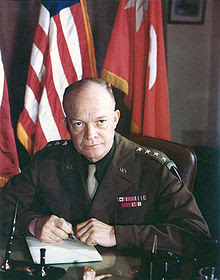 General "Ike" Eisenhower
While the U.S. military had experienced the difficulty of working in partnerships during the First World War – Pershing fought the French and British nearly as much as he fought the Germans – World War II proved to hold a whole new level of complexity. Much of Dwight D. Eisenhower and Marshall’s time was spent in working with Alliance partners to assure them of U.S. support and melding plans together. It was a dangerous high-wire walk where a single misstep could lose a battle or alienate an ally. Allied victory is a strong testament to the leadership of men like Ike, Bradley, and Marshall, often overshadowed by the more flamboyant Patton and MacArthur – 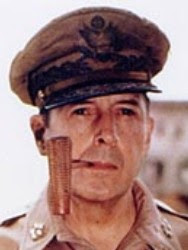 who both carried Pershing-like tendencies of micromanagement, volatile tempers, and the ability to alienate partners.
World War II also demonstrated the difficulty of maneuvering large units, although the Army cut the size of the division in half from World War I. It also encouraged maneuvers during the inter-war period which gave leaders the opportunity to actually move large numbers of troops in training. But still difficulties remained. 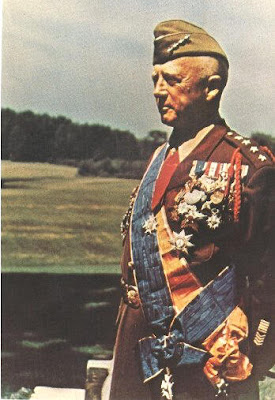 While Patton’s Third Army in Europe might be able to be in close contact with most of its units, Walter Krueger’s Sixth Army in the Pacific could be scattered across hundreds of miles of ocean, dependent on the Navy to move. It was a far different game that commanders had to learn to play. Successful commanders, such as Bradley, learned that the best way to serve their subordinate commanders was to give them minimal essential guidance and as much leeway as possible. 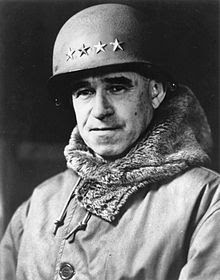 Bradley also decreased the size of his staff and did as much as possible to un-clutter the staff landscape, so to speak, realizing that multiple headquarters units confused the situation more than they helped.
So that brings us up to today, where the U.S. Army has embraced the idea of Mission Command in doctrine. But it struggles with its implementation. One reason for this is the connectivity of the modern battlefield; modern commanders are saturated with information through a variety of systems. Most of these systems are meant to enable commanders but more often than not they can hinder rapid decision making and good judgment by taking the focus away from the mission and placing it on the data. What we have not yet seen is how this will play out when commanders begin to maneuver troop formations in the excess of 50-80,000, or even 100,000. As I’ve mentioned before, we haven’t conducted large scale maneuvers since the 1980s REFORGER exercises. 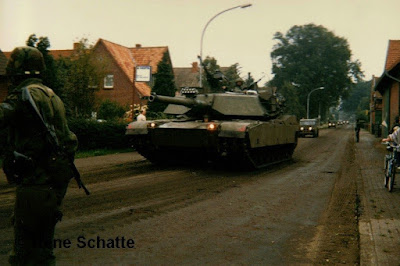 REFORGER 1987
And all this is made the more difficult because of the rapidly changing nature of war – both technologically and in the way that nation states choose to conduct conflicts through proxies. It becomes difficult to predict how future commanders will wage war or what it will look like. What is certain is that the intricacies of commanding mass formations is not going to go away. Commanders at all level need to focus on the lessons of the past. And training needs to encompass not just blocks to be checked, but true challenges from a dynamic enemy and large numbers of troops. The perils of command are timeless.
Posted by MrGarabaldi at 9:29 PM