I have Blogged Many times before about the Stasi and my experiences in East Germany while I was attached FSBerlin  while stationed in West Germany.   I do know that 1 out of 7 "Oasties" were informers on the others during the time of Honnecker.  Some were willing to sell out their fellow countryman for extra privileges and rations but most were coerced into it by the STASI because they were picked up in prior scoops and were forced to "narc" on others to stay out of prison and the STASI were better at running a police state than the KGB. Something to say about the teutonic efficiency.    I had read something and it had really bummed me out, Apparently NYC had set up "Virus Checkpoints" where you couldn't travel out of the city.  Where you can't travel unless you have papers and I was thinking.."This is America! When did we have to have papers to travel and permission from our "Betters" to travel.  I was seriously bummed out, what has happened to the American character, it seemed that we have surrendered our own sovereignty  to the "Ruling Class".

I clipped this from the "American Thinker"

History. It's a curious thing. We learn from it, or at least we should, and we try to use it as a guide for the present and the future. Of course, we all interpret it a bit differently.

At the close of World War II in 1945, the nation of Germany was partitioned into two distinct nations. The Bundesrepublik Deutschland in the west, or West Germany, and the misleadingly named German Democratic Republic (Deutsche Demokratische Republik) in the east, or East Germany. Further, the then-former capital of Germany, Berlin, was divided into 4 sectors, with the British, French and American sectors becoming West Berlin and the Soviet sector becoming East Berlin. Democracy and republics in the western parts of both versus the eastern European version of communism in the eastern parts.

The East German law enforcement apparatus was monstrous, cruel, brutal and pervasive. Although there were local law enforcement organizations, the primary responsibility for maintaining law and order throughout East Germany belonged to the Ministry for State Security, or the Stasi as it was called. It must be made crystal clear here that the Stasi and the governments of East Germany and East Berlin were decidedly not Nazis.

A brief description of the Stasi from Wikipedia:

"The Ministry for State Security (German: Ministerium für Staatssicherheit, MfS) or State Security Service (Staatssicherheitsdienst, SSD), commonly known as the Stasi, was the official state security service of the German Democratic Republic (East Germany). One of the Stasi's main tasks was spying on the population, primarily through a vast network of citizens turned informants, and fighting any opposition by overt and covert measures, including hidden psychological destruction of dissidents (Zersetzung, literally meaning "decomposition"). It arrested 250,000 people as political prisoners during its existence." 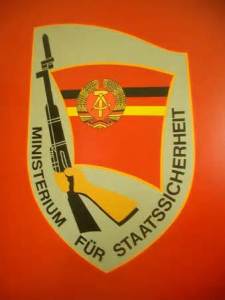 Emblem of the Stasi

Let’s focus for a second on that "vast network of citizens turned informants." First, those people could hardly be accurately described as citizens, as they were more like subjects, vassals, serfs and comrades in the communist system set up under the supervision of the Union of Soviet Socialist Republics (USSR). The Stasi had a reputation as seemingly having been everywhere and knowing virtually everything. Nonetheless, there were nowhere near enough actual members of the Stasi itself to have been that effective in controlling the population. Rather, as the paragraph above makes clear, the Stasi used the people of East Germany against themselves to help them keep dissension suppressed, political opposition crushed and, most dreadfully, the population intimidated. In other words, the Stasi didn't need to be everywhere all the time because it had effectively made the people of East Germany their own enemies! Fear was the most useful and effective tool that the Stasi employed.

Any transgression of behavior would be reported to the Stasi and the alleged transgressor(s) would be confronted, most likely arrested, possibly beaten or tortured and even imprisoned. And as we all know, anyone attempting to leave the Utopian society of East Germany or East Berlin for the west were most likely stopped violently or killed outright.

Anyway, try to imagine living in a society like that where everything you said or did was subject to oversight not only by the repressive government but also by your neighbors, your coworkers, passers-by in the street, or even your family. Such a society is completely alien to our American way of life. Or at least it used to be.

In the wake of the pandemic currently wreaking havoc on our society and cultural norms, we have our federal government scrambling for the right response and the various states and territories doing the same. Right now, here in the United States of America in the year 2020, we have governors and other elected officials (I will never refer to them as leaders!) encouraging and even urging the citizenry to spy on itself and report to the state those who transgress the various orders, mandates, edicts and requirements handed down by them. To call the police if there are too many people in the same place at the same time, in the eyes of the person making the dreaded call. To be, in effect, tattletales and snitches for "the state."

Folks, whatever the rationale behind those orders may be and whatever reasoning you or they might employ to justify them, actions like that by our political office holders smacks of state overbearing. Of repression. Of intimidation and fear. Of tyranny. I chose that word deliberately, and I did not do so lightl

The resemblance to the tactics used by the Stasi, however cleverly camouflaged here and couched in whatever innocent sounding terms they like to use, justified by whatever seemingly compassionate motivations those officials tout, is inherently and incredibly dangerous. Far more dangerous than any germ, virus or microbe.

This American urges you to do what you think and believe is right for yourself, your family and loved ones. Be responsible and be careful. But mind your own business. Leave other people to do what they do, whether or not you think it is in their best interests - or yours. Don't become part of the state, no matter how righteously indignant you become. I will never report anyone, anywhere, at any time, for any reason, for what I perceive to be a violation of an executive order. Our law enforcement professional friends and neighbors already have enough to do without such nuisances and annoyances taking up even more of their time and our resources.

Have a wonderful day, America. God Bless you all.

Email ThisBlogThis!Share to TwitterShare to FacebookShare to Pinterest
Labels: Stasi