Why Guns Belong in Church.

I had attended the Church Security Classes that our local Sheriff had sponsored a couple of years ago when I was a Trustee and we Trustee's amongst ourselves were armed even though the Church elders didn't like the idea.  I understood the reasoning, but it was legal bullcrap,  they were more scared of lawyers than of of some psycho getting into the Church and start shooting the members of the congregation.  That was part of the reason I had purchased the M&P Shield that I have. 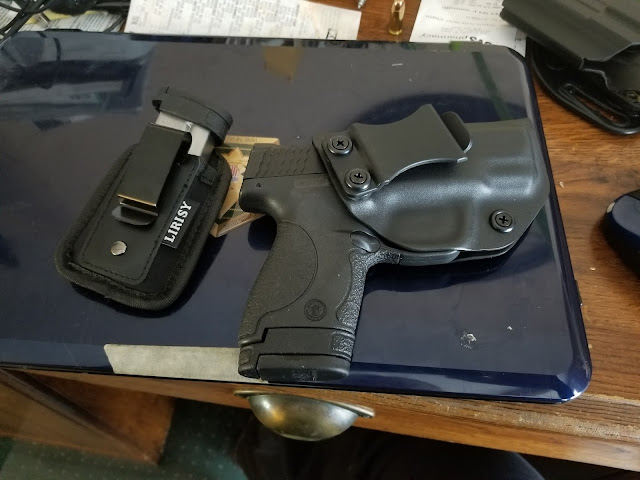 I had shamelessly clipped this From Ox and Dave Morris and their blog, I get email notifications about shooting classes and once the ammo shortages start easing up, I want to get more training, but right now I am afraid to go do any real shooting that involves a lot of ammo usage because I can't replace what I will expend, although the Sheriff's office where Mack hangs his hat and Pudge had raved about, I would like to attend.

Well meaning people have said that guns don’t belong in churches, but today I'm going to point out why I believe the Bible says that it is appropriate to have an armed congregation

Why guns belong in churches this Christmas 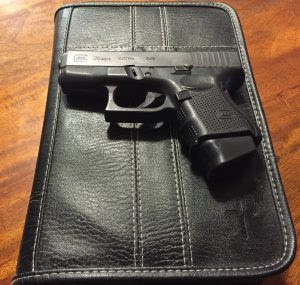 I know that not all of my readers attend church.  Even if you don’t attend church of any kind, there is good information here that can be applied to other situations and locations.  I’m not going to get preachy, but there is some church-talk in here.  Regardless, I’d encourage you to read it to pick up some easy to find, but little known things that the Bible says about self-defense.

There’s been a lot of talk since the 2017 shooting in Sutherland TX about church shootings and church security.

Well meaning people have said that guns don’t belong in churches.  One ignorant, yet prominent politician even said churches are the last place for guns.  I disagree based on what the Bible actually says and furthermore I believe that peace-loving, gentle people are the ones who benefit the most from guns.

In addition, I believe the Bible says that it is appropriate to have an armed congregation.

Church security has been a passion of mine for more than a decade and I have had to wrestle with several issues regarding the place of guns in church, stopping evil vs. turning the other cheek, carrying when it’s less-than-legal, and the balance between people who abhor violence of any kind and people like me who train to use violence to be able to stop aggressors from preying on innocent people.

One of the biggest problems is that people misunderstand the Bible’s stance on killing vs. murder.

This understanding muddies the waters on the topic of self-defense and church security as a result.

Take it 1 step further and there’s a very serious issue with warriors coming back from war feeling like they don’t have a place in church anymore because of the fact that they took life or were willing to take life.

Simply put, the Bible doesn’t say, “Thou Shall Not ‘Kill'”  and any time you see “thou shall not kill,” it is a mistranslation that is incredibly easy for modern readers to confirm.  Let’s start by going back to the 10 Commandments.  The word used for the 5th/6th commandment translates to “murder” and not “kill” as many translations of the Bible have mis-translated and well meaning people have misquoted.

The word for kill applies to humans AND animals.

If the commandment was not to kill, God wouldn’t have killed animals in the garden to clothe Adam and Eve (Gen 3:21),

Animals wouldn’t be listed as food (Genesis 9:3 and

He wouldn’t have instituted killing animals as part of the atonement process (Leviticus 3:45).

Jesus wouldn’t have told the disciples to sell their extra cloak and buy a sword (Luke 22:36-38), and

He would have told Simon to get rid of his sword instead of re-sheath it when he cut off the Roman guard’s ear (22:50-51).

The misinterpretation has long caused guys who have legitimately killed and guys who have switched their brain to be able to kill bad actors to protect good ones to feel a disconnect with the Bible, church, and with other Christians who haven’t dug into what the Bible actually says.

I’m not a Biblical scholar, but a couple of ways that I can find to make that mesh with the rest of scripture is to interpret it as saying that we’re not supposed to take revenge, be a vigilante, or be Frank Castle from “The Punisher,” no matter how appealing the storyline is.

We have a system in place called due process to institute justice after the fact.  It’s not perfect, but it’s probably better than everyone serving out justice individually on their own terms in the heat of the moment.

Let’s get personal…even if my wife would happen to believe that she should turn the other cheek if she was being attacked, it doesn’t say I should stand by and do nothing.

Stopping violence is different than getting revenge.

Along with not being a vigilante, the Bible tells us that life is precious, that we’re to rescue the weak and needy & deliver them from the hand of the wicked.  We’re to take care of widows and orphans.  We’re to rescue those who are being taken away to death and pull back those who are being taken to slaughter.  I’d argue that sometimes that entails being able to take effective action against tyrants who are comfortable with violence.

But we’re also supposed to love our enemies, be quick to forgive, and if possible, live at peace with everyone.

So, God has a history of blessing warriors, makes provision for killing an intruder at night (Exodus 22:2), Jesus tells the disciples to be armed, but no other mention is made in the rest of the New Testament, and we’re supposed to protect the weak and the sick.

What’s this mean for churches and church security?

“Tactical Preacher” sent me a link to a sermon he gave on Christian self-defense.  You can see it here: https://www.youtube.com/watch?v=huR0djKL2p8&feature=youtu.be and a few of these points came from him.

1.  When Jesus tells the 11 disciples to arm themselves, they replied back saying they had 2 swords and Jesus said that was enough.  He didn’t tell everyone that they needed to be armed.  The numbers work out to roughly 20%.  It’s not a command, but it is an illustration of a good model.  As a comparison, there are roughly 800,000 credentialed law enforcement officers in a country of 325 million.  20% isn’t a hard and fast number, but if ONLY law enforcement were armed, we’d be at roughly .2% or .002.  About .7% of the US population is active or reserve military.  IF the 20% number is a guide, it means a lot of pastors, staff, and other civilians need to fill in the gap.

2.  Some law enforcement will never switch off…even in church.  But those who can or need to should be able to and shouldn’t always carry the burden of protecting the flock by themselves.

3.  Not everyone can or should be armed.  Current/past legal issues, lack of training, sickness, lack of temper control, mental state, negative effects of medications, a lack of good judgement, and other issues all make the right choice for many to NOT be armed.  I’d argue that some pastors shouldn’t be armed because their hearts are tender and tuned to help the hurting rather than being tuned to stop evil.  We’re all wired differently.  Some are wired to protect the flock from evil with force…others are wired to protect the flock from evil with prayer.  Some are wired to do both, but a focus on either end of the spectrum at the expense of the other is not healthy for a church.

4.  If you’re a Christian, your faith and hope should be in the Lord…not your gun.

The reality of church volunteer programs is that the same people fill multiple roles, but I think it’s important to delineate the roles and know which people are filling which roles.

As an example, I’ve found that when my overall stress level is high, I can still be the guy looking for and ready to respond to threats, but I’m not the best guy to smile and shake hands with a bunch of people.

The point of this is that, when possible, let people serve in the capacity that they’re able to and use the gifts that they were blessed with.

6.  A LOT of churches are addressing their security concerns right now.  Guns are a very valuable tool to stop violence.  So are tactical lights, tactical pens, OC, Tasers, fire extinguishers, cups of coffee, Bibles, and chairs next to the aisle that you can pick up and ram into an attacker.

7.  Historically, the majority of church related attacks have happened during the week, between the church and parking lot or off property…not during service.  Most disturbances that happen during a service don’t justify a lethal force response.  There’s an incredible book that I recommend called “Evil Invades Sanctuary” that goes into more of these statistics.

It’s tempting to focus on preparing for the incidents that are the most dramatic and that have historically received the most media attention, but it may not be the best use of time/resources.

I’m not saying that you shouldn’t plan for the worst, but don’t do so at the expense of planning for events that are more likely to occur.

8.  Just because there are guns in church doesn’t mean that they’ll get used any more than having Bibles in homes means they’ll actually get read.  Guns don’t shoot themselves any more than Bibles read themselves.

10.  A tricky and sticky thing to keep in mind is that “illegal” has different meanings.  Speeding 1 mile an hour over the speed limit is illegal.  Jaywalking is illegal.  I have carried a concealed pistol in churches where it would have been a minor misdemeanor trespassing charge if 1. It was known that I was carrying, 2. They contacted the police and signed a complaint, and 3. I was charged and found guilty.  I consulted attorneys and fully understood the law, risks, and potential consequences.  Yes, I know that Christians are supposed to follow the laws that have been established and go through the appropriate process to change them if they’re unjust.  Eventually, I was asked to carry (still technically illegal) by an elder.  If the potential consequence would have been a major misdemeanor or a felony, I wouldn’t have done it.

11.  Carrying a gun without training is like driving a car without air in the tires.  Don’t do it.  Get training.  Practice on a regular basis.  Strive to keep improving your skills over time.

Here’s my wish for you…

May you live a life worth defending.

May you be surrounded by people youlove enough to fight for.

May you live a peaceful life,even though you practice violent arts.

And, on that day when violenceturns your world upside down,

May you stop the threat withsuperior skill, intensity, and purity of heart.

Email ThisBlogThis!Share to TwitterShare to FacebookShare to Pinterest
Labels: Church, Self Defence