As every year Santa was preparing his sleigh for Christmas deliveries. The FAA flight test had been passed, the reindeer were ready, overflight permissions had all arrived.

Santa was thus preparing his flight plan on his brand new tablet computer, when the load elves brought some additional last minute parcels to deliver. In the hurry Santa put the tablet onto the only free space available immediately, onto his head, grabbed the parcels and stowed them inside the sleigh carefully monitoring mass and balance. When he tried to grab his tablet again to update the load sheet, the tablet computer was terribly hot and Santa burned his fingers, the tablet fell down onto the sleigh's floor. Despite the smoke Santa could see an arrow sticking right through the middle of the tablet. Cabin elves quickly doused the tablet and put it into a secure container.

Looking around he saw an elf on guard duty equipped with a crossbow, who shrugged "Sorry, Santa, couldn't resist, why did you put the apple onto your head?" 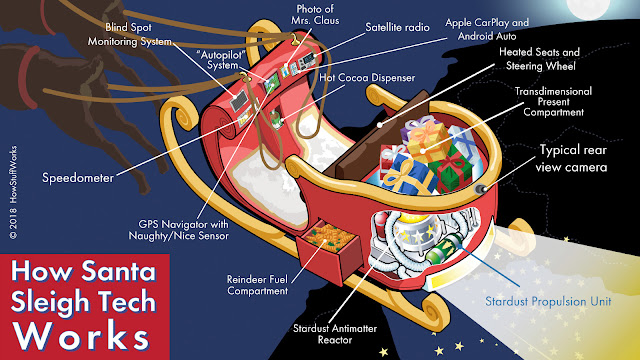