The M1 Carbine, 10 little known facts about the popular Carbine.

I was super busy and was unable to get anything on my "Tuesday" postings.   My Bad.

Getting an M1 Carbine is on my "Bucket" list, but they are expensive despite they used to be very common in the surplus market.  I always liked the little carbine, especially with the extended magazine it was quite "respectable" in the firepower dept. 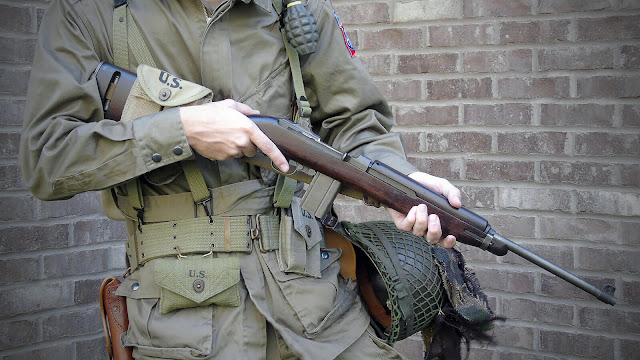 I shamelessly clipped this from "American Rifleman"

The “U.S. Carbine, Caliber .30, M1” was the most produced American infantry arm of World War II. And it's back in production today. As this is written, my cheek is gleefully stained with linseed oil (either that or I have jaundice) from test-firing the M1 Carbine and M1A1 Paratrooper Carbines as made today by Inland Manufacturing in Dayton, Ohio.The guns look great and capture the nostalgia and function of the originals made from 1942 to 1945 (read an earlier review by B. Gil Horman here and watch a video of it being fired at SHOT Show 2015). But carbines go much further than their use by the “Greatest Generation” during World War II.Here are some things you may or may not have known about the gun that started out as the U.S. Army’s “Light Rifle.”1. The M1 Carbine as a round is ballistically effective.Remember, the M1 Carbine was designed to replace the M1911A1 in the hands of support troops, machine gunners, etc., whoever did not need a full-size rifle. No one doubts it is better than a pistol at any but the shortest of ranges, and, unlike Marines at “Frozen Chosin,” you can use modern defensive ammo.

If you ever watch “To Hell and Back” starring Medal of Honor recipient Murphy as himself, you can tell he really knew how to handle a carbine.3. It was the chosen weapon of our enemy.During the early fighting in the Vietnam War, our main enemy—the Viet Cong—armed entire units the M1 and M2 Carbines, guns they took from the French, then from ARVN (Army of the Republic of Vietnam) and local forces of the South Vietnamese.

It was in this way that guns given to our allies were used against our troops. The AK-47 become more common as more and more NVA got into the fight.4. It was the only gun made specifically for U.S. Airborne Forces during World War II.The M1A1 carbine with its pistol grip and folding metal stock was adopted in May 1942 specifically for use of American Airborne troops. Inland was the only original maker (others were later converted in the overhaul system) and produced 140,591 during World War II.

It even came with a nifty web belt holster called a “jump scabbard.” Okay, there is the Reising 55, too, but that is a story for another day.5. You can’t get them surplus.The last big import wave of M1 Carbines came in from Blue Sky and Arlington Ordnance decades ago. In 1963, about 240,000 M1 Carbines were decommissioned and sold (without magazines) to NRA members for a $20 each ($17.50 plus $2.50 S&H).There is a large quantity of surplus carbines warehoused in South Korea, but there has been no success in getting them to our shores. The good news is that Auto-Ordnance and the new Inland Mfg. offer new versions of the original “Light Rifle” in a host of variations for both collectors and shooters.6. Winchester—even though it was invented there—wasn’t the largest producer.Nope, that honor goes to the Inland Mfg. Division of General Motors with 2,362,097. Winchester made 828,059, followed by Underwood Elliott-Fisher at 545,616, Saginaw Steering Gear 517,212, IBM at 346,500, Standard Products at 247,000, Rock-Ola (yes, the juke box maker), with 228,500, Quality Hardware at 359,666, National Postal Meter at 413,017 and Irwin-Pedersen made a few thousand but had trouble.7. It was the U.S. military’s first night-time sniper rifle.When fitted with an ungainly infrared scope, the T3 Carbine was used as night-fighting weapon in the closing days of the Pacific Theatre of Operations during World War II.

It’s also the main plot device in Stephen Hunter’s novel “Black Light.” Darn, I just ruined the book for you. Read it anyway.8.  The M1 Carbine was used by police, too.In the 1960s, Jim Cirillo, from the NYPD’s Stake Out Squad, and author of “Tales of the Stakeout Squad,” used a NYPD-issue M1 Carbine with G.I. ball ammo. Cirillo was involved in more than 20 gunfights. Doubt the Carbine’s use for law enforcement? You should ask one of the NYPD’s top gunfighters.9.  You can shoot the National Matches with one.During the National Matches at Camp Perry, Ohio, the Civilian Marksmanship Program conducts the M1 Carbine Match to be sponsored this year by Inland Mfg., on July 21.

You can also shoot them in some classes of NRA High Power, but the bullet drop is pretty severe at long range. That’s why the CMP match is fired at 100 yards.10.  Carbines aren’t cheap.The days of the $400 gun show carbine are over. There are dedicated collector’s groups (the Carbine Club) and books by Carbine historian Larry Ruth as well as Field Editor Bruce Canfield that have upped the collectability of the carbine greatly. Good research does that.Original carbines, especially in high condition, are rare, and they are a collecting field unto themselves Even beat up guns go upward of $700 these days. How ridiculous are the prices? In 2008, an Inland M1A1 “paratrooper” Carbine with ironclad D-Day provenance sold at auction for $20,125. 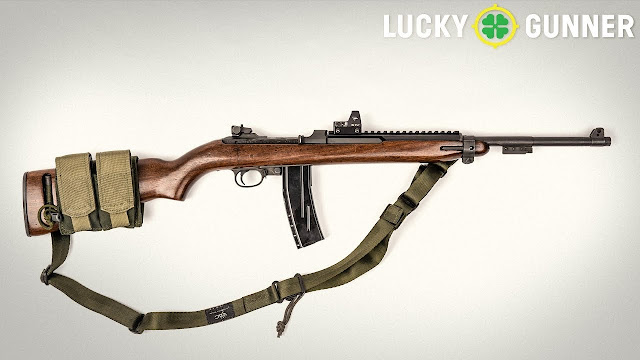 Posted by MrGarabaldi at 8:59 PM