United States Army replacing the M4 Rifles and the 5.56 with the Next Generation Rifle System.

I wonder if the old timers in the mid 60's felt the same way when they saw the M1 and the M14 being superseded by the "Mattel Rifle" A.K.A. the M16 rifle system.  I had a long discussion with Mack and we were discussing new rifle builds and the future of battle Rifle for the US Armed Forces and the new caliber for the AR Platform.  Mack was extolling the virtues of the 6.8 caliber round and how effective it was in A-Stan,  and I had decided to build my next potential Kayak loss as a 6.8 caliber or a 6.5 creedmore to take advantage of the versatility of the round.  Out of the 3 rifle system, I am leaning toward the Sig because it is the closest ergonomically to the AR platform and there is less of a learning curve for the Soldiers to learn and will be easier for the Soldiers to grasp and under pressure having to fumble around with unfamiliar rifle can take precious time and time wasted is a time killer and a that can be a soldier killer. 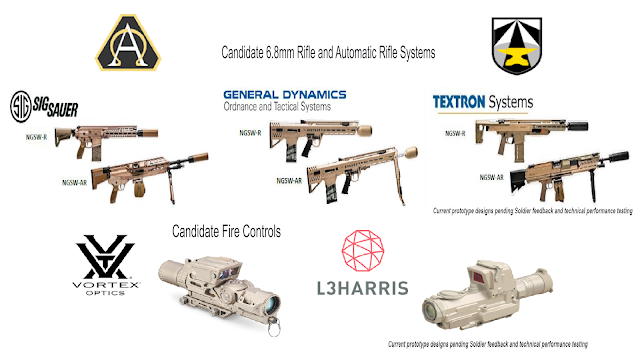 The US Army is looking at the NGSW system to replace both the M249 Squad Automatic Weapon (SAW) and the M16/M4/carbine used by close combat forces with a new weapon within two years.

Known as the Next Generation Squad Weapon, it finished its first prototype test in September. The test included prototypes from Sig Sauer, Textron Systems, and General Dynamics Ordnance.

The Army is also working with L3 Technologies and Vortex Optics to develop fire control for the weapon.

Sig Sauer turned in a design that looks much like a traditional assault rifle. General Dynamics is using a bullpup design that results in a shorter length weapon by including the magazine feed in the stock. Textron’s offering contains a unique cartridge – a cased telescope item which reduces weight by having the projectile inside the casing.

In April, the three companies each provided 15 rifles, 15 automatic rifles and 180,000 cartridges which use the mandated 6.8mm projectile.

The government chose the 6.8mm projectile based on decades of testing and evaluation. They found that 5.6mm projectiles performed inadequately at mid-ranges and the current 7.62mm was not as effective as the 6.8mm projectile. The new size also saves weight compared to current caliber ammunition.

Each company’s rifle and automatic rifle tested will use the same rounds which will make both weapons effective beyond the 600m mark current light caliber weapons are effective to.

The companies have six months from the September testing to prepare for the next prototype test which is scheduled to occur in February.

Major Wyatt Ottmar, project officer over NGSW for the Soldier Lethality CFT, noted that the Sig Sauer weapon used ammunition with steel lower and brass upper cartridges. This was done to reduce weight.

A contract for the new weapons is expected to be awarded to one of the three companies in the testing during the next fiscal year. The weapons should then be in the field beginning in the fourth quarter of 2022 meaning between August and October of 2022. They will be provided to Infantry, Stryker, and Armor Brigade Combat Teams.

In the end, all close combat teams will switch to the new weapon. Special forces, infantry, combat engineers, and scouts will all be using the new weapon.

The fire control units are expected to be ready six months before the final weapon in order to give the companies a chance to integrate the optic with the gun.

General Dynamics placed the magazine and the bolt-carrier group behind the pistol grip in their bullpup design. This type of rifle has been popular around the world but has never caught on in the US. The design allows the rifle to be more compact without sacrificing barrel length. A spokesperson from GD said they had received good feedback from users.

Textron’s offering is built around their case-telescoped ammunition. The ammo uses a plastic casing rather than metal to keep weight down.

Textron worked with Heckler & Koch in developing the weapon and Lewis Machine & Tool Company to develop the silencer.

Sig Sauer developed the most traditional looking of the three offerings. They are quick to point out that they are the only company of the three that developed the entire weapon in-house. The gun, the silencer, the ammo, the accessories are all designed and developed by Sig Sauer.