Monday Music " I walk the line" by Johnny Cash 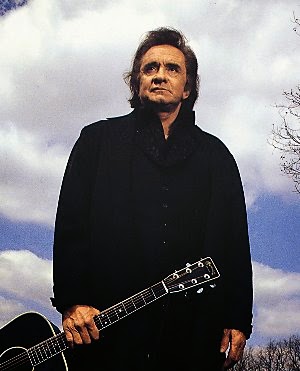 My dad was a big fan of Johnny Cash, he always was playing the albums, so I remember quite a few of the songs, My dad loved the "Folsom Prison Blues"  and San Quentin.  Both were real good albums.  He would play Cash's songs along with Elvis Presley.  I grew to like the songs my Dad liked and that is the joys of being a "Daddy", you get to inflict your taste on your kid.  My son sings to my "80's" songs that I like to listen to.  One day he will do the same thing I did, inflict his taste on his kid...in the fullness of time....I don't want to be a grand-dad too soon.  Harry getting married and having a kid in his late 20's would be good. 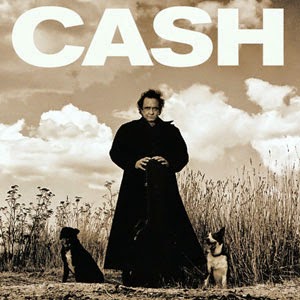 "I Walk the Line" is a song written by Johnny Cash and recorded in 1956. After three attempts with moderate chart ratings, "I Walk the Line" became the first number one Billboard hit for Cash. The single remained on the record charts for over 43 weeks, and sold over 2 million copies. 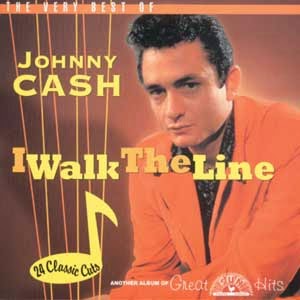 The unique chord progression for the song was inspired by backwards playback of guitar runs on Cash's tape recorder while he was in the Air Force stationed in Germany. Later in a telephone interview, Cash stated, “I wrote the song backstage one night in 1956 in Gladewater, Texas. I was newly married at the time, and I suppose I was laying out my pledge of devotion." After the writing of the song Cash had a discussion with fellow performer Carl Perkins who encouraged him to adopt "I Walk the Line" as the song title. Cash originally intended the song as a slow ballad, but producer Sam Phillips preferred a faster arrangement, which Cash grew to like as the uptempo recording met with success.

" Live at San Quentin"
Once while performing the song on his TV show, Cash told the audience, with a smile, "People ask me why I always hum whenever I sing this song. It's to get my pitch." The humming was necessary since the song required Cash to change keys several times while singing it.
The song was originally recorded at Sun Studio on April 2, 1956, and was released on May 1. It spent six weeks at the top spot on the U.S. country Juke Box charts that summer, one week on the C&W Jockey charts and number two on the C&W Best Seller charts. "I Walk the Line" crossed over and reached number 19 on the pop music charts.
It was performed with the help of Marshall Grant and Luther Perkins, two mechanics that his brother introduced him to following his discharge from the Air Force. Cash and his wife, Vivian, were living in Memphis, Tennessee, at the time. Cash became the front man for the group and precipitated the introduction of the group to Sam Phillips of Sun Records. In 1955 they began recording under the Sun label.
The song was re-recorded four times during Cash's career. In 1964 for the I Walk the Line album, again in 1969 for the At San Quentin album, in 1970 for the I Walk the Line soundtrack, and finally in 1988 for the Classic Cash: Hall of Fame Series album.
In 2004, Rolling Stone ranked the song at #30 on their list of the 500 Greatest Songs of All Time.

The song is very simple and like most Cash songs, the lyrics tell more of a story than the music conveys. (You've got a way to keep me on your side/You give me cause for love that I can't hide/For you I know I'd even try to turn the tide).
It is based upon the "boom-chicka-boom" or "freight train" rhythm common in many of Cash's songs. In the original recording of the song, there is a key change between each of the five verses, and Cash hums the new root note before singing each verse. The final verse, a reprise of the first, is sung a full octave lower than the first verse. According to Cash, he loved the sound of a snare drum, but drums were not used in country music back then, so he placed a piece of paper in his guitar strings and created his own unique "snare drum"
Johnny, with the Temptations outside his door and a new wife at home, wanted the lyrics to say, "I’m going to be true to those who believe in me and depend on me to myself and God. Something like I’m still being true, or I’m 'Walking The Line.' "The lyrics came as fast as I could write," says Johnny. "In 20 minutes, I had it finished."