Monday Music "Toad the wet sprocket" All I need

I had a very busy time upon our return from vacation.....I went camping!!! again.....*Yay*.  I was in a different part of camp and I had no internet access and basic phone service was the extent of my ability to stay connected.  We came back exhausted.  My son had a lot of fun setting up the "haunted trail" and I worked in the messhall...again.  I was a bit pissed, pissy,angry honked off, annoyed, asshole mode, "Irritated".  There was a mis-communication and there was no support staff in the messhall, so I and another leader stepped up and worked the messhall.  I wanted to spend time with my troop as they worked the haunted trail, but Robert E. Lee said" Duty is the most sublime of mistresses, harsh and unyielding.".  Needless to say I missed all of that.  I was amazed by all the "leaders" that made the mess and bailed out and left, Both adult and scouts.   It was 18+ hour days.  I came home exhausted.  Nothing like going to work tired.

While I was at work, this song came on and I figured I would roll with a song from the 90's.  When I hear this song, it reminds me of my time in the early 90's when I was out of the U.S. Army and working at Domino's Pizza as a manager.  During this time I was very angry, I had been forced to leave the Army due to politicians desire for a "peace dividend" and the U.S. Army cut 50% of its strength in 2 years to stay ahead of the politicians wanting to gut the Military.  I was angry about that, I also had a good job with a company called Kawneer as a skilled commercial door fabricator and got laid off due to economic downturn.  I was really bitter, I was working as a Pizza Manager and was unable to find another job and felt trapped, this adding to my isolation.  I had cut off contact with my friends, pride wouldn't let me stay in contact because I didn't want to let them see how far I had fallen.   Needless over time I reestablished my equilibrium and was able to work my way out of the cellar.  The song is a good song, but it also reminds me of how far I had fallen and how far I had climbed to get out of the cellar.


Toad the Wet Sprocket took its name from a Monty Python comedy sketch called "Rock Notes" in which a journalist delivers a nonsensical music news report:

Rex Stardust, lead electric triangle with Toad the Wet Sprocket, has had to have an elbow removed following their recent successful worldwide tour of Finland. Flamboyant ambidextrous Rex apparently fell off the back of a motorcycle. "Fell off the back of a motorcyclist, most likely," quipped ace drummer Jumbo McClooney upon hearing of the accident. Plans are now afoot for a major tour of Iceland.

As their first gig approached, the band still had not chosen a name. The members facetiously adopted "Toad the Wet Sprocket" because they thought it would be "hilarious". Vocalist Glen Phillips later called it "a joke that went on too long", and, according to their website, "it was probably meant to be temporary at the time".
Eric Idle, the sketch's original performer, reflected on the band's name in a 1999 performance:

I once wrote a sketch about rock musicians and I was trying to think of a name that would be so silly nobody would ever use it, or dream it could ever be used. So I wrote the words "Toad the Wet Sprocket". And a few years later, I was driving along the freeway in L.A., and a song came on the radio, and the DJ said, "that was by Toad the Wet Sprocket", and I nearly drove off the freeway." 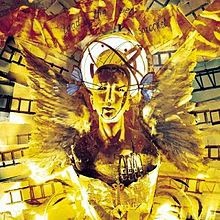 The band finally achieved fame with their third album, fear. The album was released in 1991, and saw the singles "All I Want" and "Walk on the Ocean" reach the top 20 of the Billboard Hot 100. The album became the band's first RIAA-certified platinum album.
The 1992 film Buffy the Vampire Slayer featured the song "Little Heaven" and was included in the movie soundtrack.
In 1993, the Mike Myers feature film So I Married an Axe Murderer included the song "Brother" on its soundtrack. "Brother" later appeared on the In Light Syrup compilation album, as well as on the 2004 release of the live album Welcome Home: Live at the Arlington Theatre, Santa Barbara 1992.


Music Video:  The is a bit unusual and for the first time I am unable to find any information on the music video.
Posted by MrGarabaldi at 6:22 PM