I decided to go with Sylvester the cat, he is almost likable except when it comes to that anemic "tweety Bird".  This rivalry is almost as bad as the Wile E. Coyote and the Road runner.  I also enjoy the cat and Spike the dog. 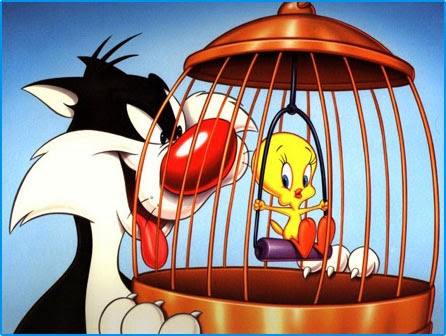 Sylvester J. Pussycat, Sr., Sylvester the Cat or simply Sylvester, or Puddy Tat, is a fictional character, a three-time Academy Award-winning anthropomorphic Tuxedo cat in the Looney Tunes and Merrie Melodies repertory, often chasing Tweety Bird, Speedy Gonzales, or Hippety Hopper. The name "Sylvester" is a play on Felis silvestris, the scientific name for the wild cat species (domestic cats like Sylvester, though, are actually Felis catus). The character debuted in Friz Freleng's Life With Feathers (1945). Freleng's 1947 cartoon Tweetie Pie was the first pairing of Tweety with Sylvester, and the Bob Clampett-directed Kitty Kornered (1946) was Sylvester's first pairing with Porky Pig. Sylvester appeared in 103 cartoons in the golden age, three of which won Academy Awards, the most for any Looney Tunes character.
Sylvester was #33 on TV Guide's list of top 50 best cartoon characters, together with Tweety.

Sylvester's trademark is his sloppy and yet stridulating lisp. In his autobiography, That's Not All Folks!, voice actor Mel Blanc stated that Sylvester's voice is based on that of Daffy Duck, plus the even more slobbery lisp, and minus the post-production speed-up that was done with Daffy's. Conventional wisdom is that Daffy's lisp, and hence also Sylvester's, were based on the lisp of producer Leon Schlesinger. However, Blanc made no such claim. He said that Daffy's lisp was based on him having a long beak, and that he borrowed the voice for Sylvester. He also pointed out that, minus the lisp, Sylvester's voice was fairly close to his own (a claim that his son Noel Blanc has confirmed). In addition, director Bob Clampett, in a 1970 Funnyworld interview, agreed with Blanc's account concerningSchlesinger.
In many cartoons, Sylvester is shown intentionally sticking out his tongue while speaking, putting emphasis that the lisp is intentional. Sylvester is also known for spraying people he's talking to with the saliva from his lisping, which is a trait rarely shared by Daffy. A common gag used for both Sylvester and Daffy is a tendency to go on a long rant, complaining about a subject and then ending it by saying "sakes."
To emphasize the lisp, as with Daffy's catchphrase "You're desthpicable", Sylvester's trademark exclamation is "Sufferin' succotash!", which is said to be a minced oath of "Suffering Savior". (Daffy also says "Sufferin' succotash!" from time to time in 6 cartoons like "Ain't That Ducky", "Baby Bottleneck", "Hollywood Daffy", "The Great Piggy Bank Robbery", "Daffy Dilly" and "Skyscraper Caper.")
Before Sylvester's appearance in the cartoons, Blanc voiced a character named Sylvester on The Judy Canova Show using the voice that would eventually become associated with the cat.
Sylvester shows a lot of pride in himself, and never gives up. Despite (or perhaps because of) his pride and persistence, Sylvester is, with rare exceptions, placed squarely on the "loser" side of the Looney Tunes winner/loser hierarchy.
He shows a different character when paired with Porky Pig in explorations of spooky places, in which he does not speak, behaves as a scaredy cat, and always seems to see the scary things Porky doesn't see, and gets scolded by him for it every time.
He also appears in a handful of cartoons with Elmer Fudd, most notably in a series of cartoons underwritten by the Alfred P. Sloan Foundation extolling the American economic system.

Sylvester, who for the most part always played the antagonist role, is featured playing the protagonist role in a couple of cartoons while having to deal with the canine duo of Spike the Bulldog and Chester the Terrier after being chased around. In 1952's Tree for Two by Friz Freleng, Sylvester is cornered in the back alley and this would result in Spike getting mauled by a black panther that had escaped from a zoo. In the 1954 film Dr. Jerkyl's Hyde, Sylvester pummels Spike (here called "Alfie") thanks to a potion that transforms him into a feline monster. After Spike's ordeal, Sylvester would have the courage and confidence to confront Chester, only to be beaten and tossed away by the little dog.

Perhaps Sylvester's most developed role is in a series of Robert McKimson-directed shorts, in which the character is a hapless mouse-catching instructor to his dubious son,Sylvester Junior, with the "mouse" being a powerful baby kangaroo which he constantly mistakes for a "king-size mouse". His alternately confident and bewildered episodes bring his son to shame, while Sylvester himself is reduced to nervous breakdowns.
Sylvester also had roles in a few cartoons:
In the 1970s and 1980s, Sylvester appeared in various Warner Bros. television specials, and in the 1980s, he appeared in the feature-film compilations.
From 1979 to 1983, Sylvester appeared in animated TV commercials for 9Lives dry cat food. These ads usually consisted of Sylvester trying to get to his box of 9Lives while avoidingHector the Bulldog. Sylvester would always succeed in luring the dog away so he could get to his food, but would always find himself a target again by the end of the commercial, which generally ended with Sylvester calling 9Lives dry food "worth riskin' your life for."
In the television series Tiny Toon Adventures, Sylvester appeared as the mentor of Furrball. The character also starred in The Sylvester and Tweety Mysteries. In the series, he plays the narrator in the beginning of episodes.

In Loonatics Unleashed, Sylvester's descendent and likely Sylvester Junior's descendent is Sylth Vester, a hitman hired by the villain, Queen Granicus, to kill the Royal Tweetums so she will not have to lose her throne. Despite his best efforts he is beaten by the Loonatics. Later on the series, it is shown that he is not entirely a bad guy, for he helped the Loonatics find the Royal Tweetums (who was hidden) and fight against Optimatus and Deuce and their plan to take over the Universe. Just like his ancestor, Sylth Vester tries to kill Tweety's descendant using all kinds of tricks, but they all backfire, resulting in Sylth Vester getting many injuries.
In 1985, Sylvester could be heard in an episode of the game show Press Your Luck. Host Peter Tomarken had earlier incorrectly credited his catchphrase "Suffering Succotash!" to Daffy Duck. Even though all three contestants had correctly answered "Sylvester," they were ruled incorrect. In a segment produced later and edited into the broadcast, Sylvester phoned Tomarken and told him, "Daffy Duck steals from me all the time." All three participants returned to compete in future episodes.

Sylvester has "died" the most of any Looney Tunes characters, having "died" in I Taw a Putty Tat, Back Alley Oproar, Peck Up Your Troubles, Satan's Waitin', Mouse Mazurka,Tweety's Circus, Trick or Tweet, and Tweet and Lovely.
Western Publications produced a comic book about Tweety and Sylvester entitled Tweety and Sylvester first in Dell Comics Four Color series #406, 489, and 524, then in their own title from Dell Comics (#4-37, 1954–62), and later from Gold Key Comics (#1-102, 1963–72). In a Garfield cartoon, he made a cameo by sending Rosalina a love letter. 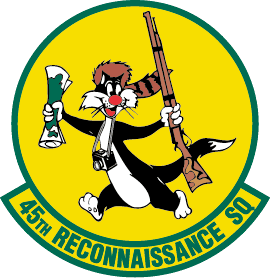 Posted by MrGarabaldi at 9:09 AM

Email ThisBlogThis!Share to TwitterShare to FacebookShare to Pinterest
Labels: cartoons, Sylvester the Cat