This is an unusual post, I will stay away from politics except to say if you havn't voted or decided yet...then you are part of the problem.  Be part of the solution.  I decided to do a post on chivalry, what meant and the lack of it now.   This post has been eating at me for a long time and I finally decided to roll with it. 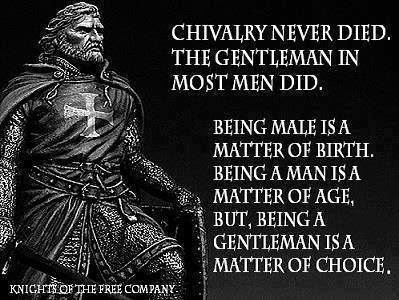 I have been told that I am a throwback to a bygone age,my mannerism and vocabulary are archiac from what I was told.   I am a firm believer in manners, I like to quote "Lazarus Long" a character that Robert Heinlein created.  Basically Lazarus Long was an immortal and he would keep notes of his experiences and observations.
"Moving parts in rubbing contact require lubrication to avoid excessive wear. Honorifics and formal politeness provide lubrication where people rub together. Often the very young, the untraveled, the naive, the unsophisticated deplore these formalities as “empty,” “meaningless,” or “dishonest,” and scorn to use them. No matter how “pure” their motives, they thereby throw sand into machinery that does not work too well at best."

I will use other quotes from Lazarus here and there to make a point, Robert Heinlein  besides being a prolific writer was prescient also, but I digress.  The point I was making and he was with that quote is basically manners are the social lubricant for interactions with other people.  I have told my son more than once, to be nice to people and remember your manners, you get more accomplished with a kind word than being a jerk.
The Act of Chivalry as practiced long ago is no longer there, It used to be stressed as part of our culture, the culture of the West.  But it is no longer practiced because people out there believe that all cultures are equal and if you display chivalrous manners, you are denigrating other cultures.....Are you kidding?   The same people that denigrate Western Civilization, are the cultural marxist and their fellow travelers that use what is called "Constructive criticism" to challenge the beliefs of a culture.  This is from the Frankfurt School of Neo Marxist social theory.  Once you have forced a society to question it's long held belief system, you can then replace it with one that is more conducive to the goals of the marxist.  The Marxist believe in social and economic equality...the end results...Having one culture being superior to the other cultures kinda upsets the social applecart.  The lack of manners that is being displayed today is a result of this.  Remember back in the Victorian era, the manners were expected of all , even the "low class people" and if somebody gave you an affront, you were expected to deal with it yourself.  Usually with a duel or fisticuffs I believe it was called.  Even when I was in school, if somebody was bullying you , you either sucked it up or you beat the bully.  Now they want you to go tell an authority figure instead...People are afraid to do anything unless they have the power of the state behind them.  People are afraid to stand on their own two feet.  That is what the social reconstruction has wrought.
This ties in with the decline of Western civilization.

"The two highest achievements of the human mind are the twin concepts of “loyalty” and “duty.” Whenever these twin concepts fall into disrepute--get out of there fast. You may possibly save yourself, but it is too late to save that society. It is doomed. "

Another quote from Lazarus, Remember that the idea of duty and loyalty are denigrated in today's society as being "outmoded" and old fashioned. "  Duty is very hard to describe, Robert E. Lee had commented that " Duty is sublime and the harshest of mistresses".  Duty is difficult to describe, but duty is basically your obligation that you place on yourself as what you owe to society by your standards.  Duty is part of a person's personal code of honor and integrity.  Words that you don't see much of anymore.  People do " what feels good", not thinking that they are doing is contributing to the decline of Western Civilization.  Loyalty is another word that is not used anymore except to yourself.  People nowadays are taught by the decline of societal norms that  it is OK to "let it all hang out" where in the past such behavior is frowned upon.  If you did something that was frowned upon by society, you got the message pretty fast, this contributed to a code of conduct or behavior that was expected of all gentlemen.  Now it is OK to be a thug.  Again this is by design, if a society cannot remember its past or the moral upbringing, than they will accept anything that the statist put out there.

"All societies are based on rules to protect pregnant women and young children. All else is surplus age, excrescence, adornment, luxury or folly which can--and must--be dumped in emergency to preserve this prime function. As racial survival is the only universal morality, no other basic is possible. Attempts to formulate a “perfect society” on any foundation other than “women and children first!” is not only witless, it is automatically genocidal. Nevertheless, starry-eyed idealists (all of them male) have tried endlessly--and no doubt will keep on trying"

Another quote from Lazarus,   It does harken back to the Victorian age of "Women and Children First".  Because in that time, they knew that it was the job of all men of virtue to ensure that the women and children survived, it was a way to guarantee their culture.  It also taught a person to put the needs of the society above his needs.  I always liked the phrase that the veteran at one time handed the government a blank check that would include payment including life if necessary.  people that are willing to out the needs of the country above their own are a rare breed,
I remembered when I was in North Georgia College, the Military college along with VMI, the Citadel, and Norwich.  There was a painting on the wall that discussed  the rules of Gentlemen.

1. Be gentle to the fairer sex, it's in the name.
2. Dress well no matter the occasion.
3. Pride is dangerous, be careful.
4. Be humble, be grateful
5. Opening the door or giving up a seat for a lady isn't up 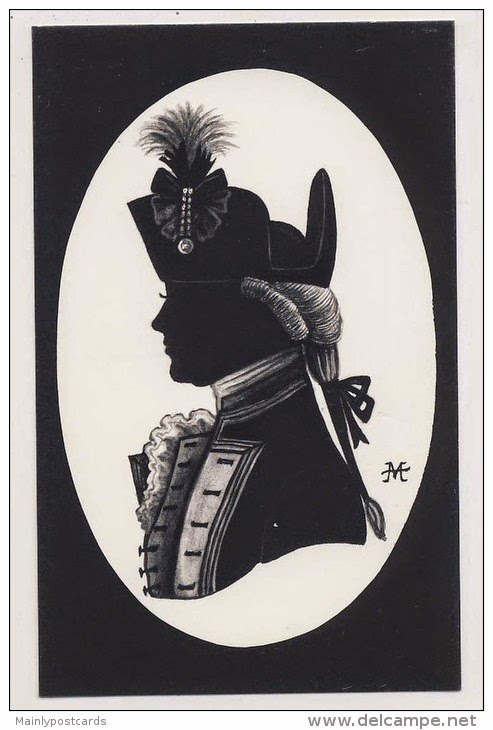 for discussion.
6. Work hard, that is if you want to own anything worth having
7. Starting / instigating a fight is for school boys, but men obtain the power to end one.
8. Ignorance isn't bliss, knowledge is power.
9. Suit up (make sure they're tailored to fit)
10. Confidence is a gentleman's trademark.
11. Comfort zones are for the weak, men aren't weak.
12. Foul language is for the less educated. Make eye contact and mean business.
13. Make Eye contact and mean business.
14. Lower your standards for no one.
15. Being romantic doesn't make you a woman.
16. Stay groomed.
17. Admit when you're wrong
18. Always make the first move, you're the MAN
19. Handwritten "Thank you" cards aren't outdated. Use them.
20. Chivalry is not dead, there are just too many boys.
21. It is said you can tell a lot about a man through his handshake, so make it strong and firm.
22. Leave her breathless
23. Judge no one, just improve yourself.
24. Speak your mind, don't hesitate.
25. Offer your arm to a lady while walking, they'll feel secure.
26. You're the man, you pay.
27. Women love compliments, gentlemen provide them.
28. Never wear your hat indoors, it's disrespectful.
29. Make sure everyone has their plate before you start eating.
30. We don't always have to be the center of attention, but we are always noticed. It is our      signature   as gentlemen to come, make a statement, leave, and be remembered.
31.  Never discuss the virtues of your women with other gentleman, it is crass and beneath you. 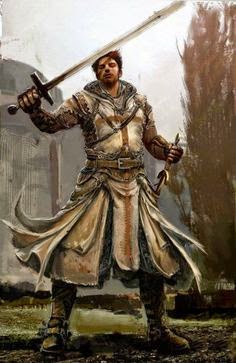 A gentleman is a successor of the knights that were sworn to defend the weak against injustice , this was a noble endeavor, it showed what it took to be the best of us, what made us more than mammals interested in the here and now.  A Knight was supposed to represent the best of their society by words and deeds.

I don't know what will it take to bring back the old norms, it will take generations to undue the damage done to Western civilization by the Marxist and their fellow travelers.  I don't know if we as a society have the mental fortitude to make the proper call.  I almost think of the 40 years in the desert like the Israelite did after leaving Egypt until all that remembered the bondage was no longer there and the ones that were there grew up in freedom and adversity.

Posted by MrGarabaldi at 5:40 PM