Well we are here in the land of the rodent.  we took a nap after getting to our room, I was tired having 3 hours of sleep for the past 3 days is draining.   We left to head to the feeding area( I know...sounds like cattle) but yes there was a lot of people there. 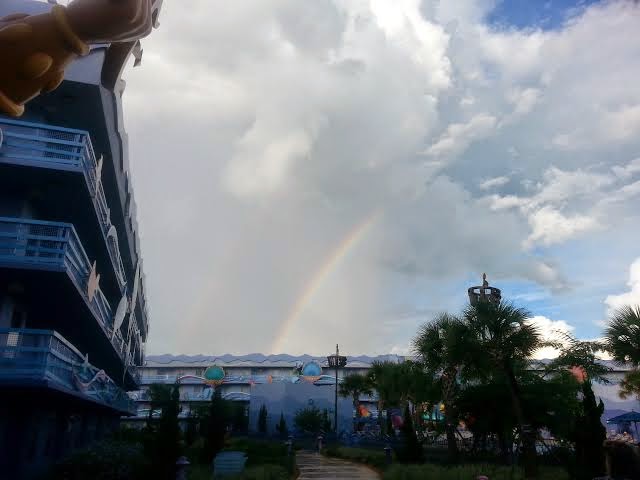 For those that have been to the panhandle state, know that rain is a regular fixture in the late summer/early fall.    The view was actually pretty good.  I do know that the people that operate the land of the rodent can move a lot of people efficiently...perhaps the .gov can learn a few things on that. 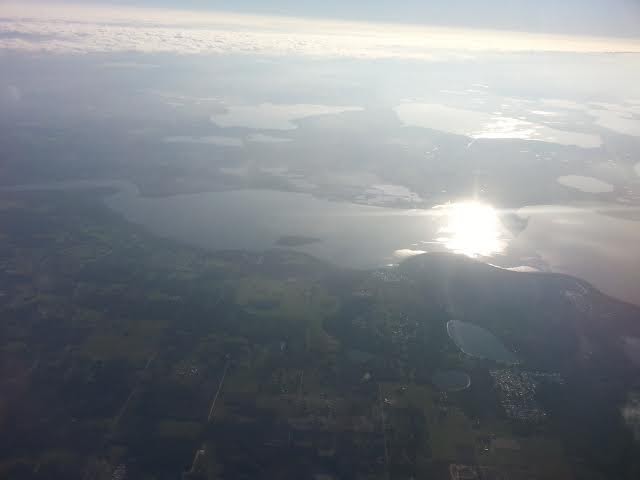 Here was the view of us flying in.  Again I am appreciative of the view that until recently was undreamed of.   I keep having the line " slipped the bonds of Earth and have touched the sky"

Oh! I have slipped the surly bonds of Earth
And danced the skies on laughter-silvered wings;
Sunward I've climbed, and joined the tumbling mirth
Of sun-split clouds, — and done a hundred things
You have not dreamed of — wheeled and soared and swung
High in the sunlit silence. Hov'ring there,
I've chased the shouting wind along, and flung
My eager craft through footless halls of air. . . .
Up, up the long, delirious burning blue
I've topped the wind-swept heights with easy grace
Where never lark, or ever eagle flew —
And, while with silent, lifting mind I've trod
The high untrespassed sanctity of space,
Put out my hand, and touched the face of God.
— John Gillespie Magee, Jr

During the desperate days of the Battle of Britain, hundreds of Americans crossed the border into Canada to enlist with the Royal Canadian Air Force. Knowingly breaking the law, but with the tacit approval of the then still officially neutral United States Government, they volunteered to fight the Nazis.
John Gillespie Magee, Jr., was one such American. Born in Shanghai, China, in 1922 to an English mother and a Scotch-Irish-American father, Magee was 18 years old when he entered flight training. Within the year, he was sent to England and posted to the newly formed No 412 Fighter Squadron, RCAF, which was activated at Digby, England, on 30 June 1941. He was qualified on and flew the Supermarine Spitfire.
Flying fighter sweeps over France and air defense over England against the German Luftwaffe, he rose to the rank of Pilot Officer.
On 3 September 1941, Magee flew a high altitude (30,000 feet) test flight in a newer model of the Spitfire V. As he orbited and climbed upward, he was struck with the inspiration of a poem — "To touch the face of God."
Once back on the ground, he wrote a letter to his parents. In it he commented, "I am enclosing a verse I wrote the other day. It started at 30,000 feet, and was finished soon after I landed." On the back of the letter, he jotted down his poem, 'High Flight.'
Just three months later, on 11 December 1941 (and only three days after the US entered the war), Pilot Officer John Gillespie Magee, Jr., was killed. The Spitfire V he was flying, VZ-H, collided with an Oxford Trainer from Cranwell Airfield flown by one Ernest Aubrey. The mid-air happened over the village of Roxholm which lies between RAF Cranwell and RAF Digby, in the county of Lincolnshire at about 400 feet AGL at 11:30. John was descending in the clouds. At the enquiry a farmer testified that he saw the Spitfire pilot struggle to push back the canopy. The pilot, he said, finally stood up to jump from the plane. John, however, was too close to the ground for his parachute to open. He died instantly. He was 19 years old.
Part of the official letter to his parents read, "Your son's funeral took place at Scopwick Cemetery, near Digby Aerodrome, at 2:30 P.M. on Saturday, 13th December, 1941, the service being conducted by Flight Lieutenant S. K. Belton, the Canadian padre of this Station. He was accorded full Service Honors, the coffin being carried by pilots of his own Squadron."

John's parents were living in Washington D.C. at the time, and the sonnet was seen by Archibald MacLeish, who was Librarian of Congress. He included it in an exhibition of poems called 'Faith and Freedom' in February 1942. And after that it was widely copied and distributed. These copies vary widely in punctuation, layout, and capitalization, as I've found out from readers! The original is in the Manuscript Division of the Library of Congress, and I think I've transcribed it correctly. Note that most printed versions use "... even eagle" but the original seems to be "... ever eagle," with similar penmanship to the preceding "never."
High flight was read over pictures of mountains and American flags and fighter aircraft as a station closing video on US television stations. To buy an excellent DVD of this video, along with many people reciting the poem, see Ray Hass at HighFlightProductions
High Flight has also inspired many parodies, some of which are in the humor part of this collection.
Ronald Reagan, addressing NASA employees following the tragic loss of the Challenger 7 crew on STS-51L, used the poem in a well-remembered line:
"We shall never forget them nor the last time we saw them, as they prepared for their mission and waved good-bye and slipped the surly bonds of Earth to touch the face of God."

Email ThisBlogThis!Share to TwitterShare to FacebookShare to Pinterest
Labels: Vacation