I clipped this from "Townhall.com", I thought they were a pretty good listing of fabrications from the media and government.  The Cartoons come from my assorted stash or folder in my computer. 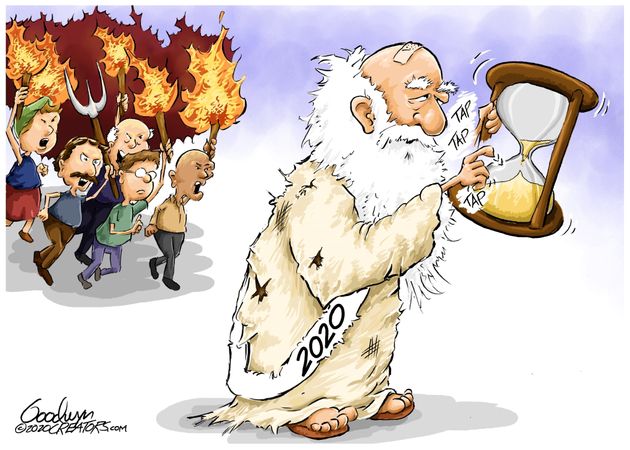 As we bid a grateful adieu to one of the absolute worst years in modern history, trying to encapsulate 2020 in just one phrase may be difficult considering ALL the things that went tragically wrong. Was it the year of COVID-19, when basic civil liberties were sacrificed at the altar of potentially saving “just one life” from a virus with a 99.87% survival rate? Was it the year Black Lives Matter used a blatant lie to defund the police and take over America’s streets? Or maybe it was the year a presidential election was stolen right from under our noses. Sadly, if you’re a freedom-loving, right-of-center conservative, 2020 was a year of all those things and more. But to sum it up in one phrase, 2020 was a ‘year of lies,’ of lies upon lies upon lies.

That’s right, the only way we could tell if our overlords were lying to us in 2020 was if their mouths were moving. And it wasn’t about just one thing, it was about almost everything, from COVID-19 to systemic police racism to a fair and clean election to almost every narrative the mainstream media tried to spin. Below, in no particular order, are my top seven myths of 2020. 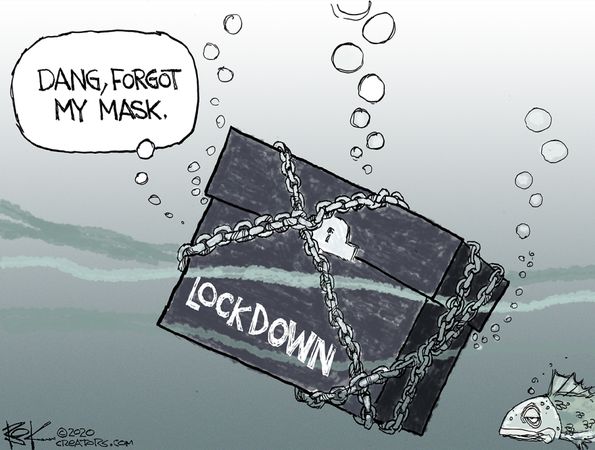 Lockdowns are worth it...

Please note the care with which I phrased the above. I’m not saying lockdowns don’t work, at least temporarily. Theoretically, if every human being on the planet had somehow magically been able to lock themselves away for a month, then maybe the virus could have been smothered before it got a foothold. Sure, millions more would have died from the lockdowns, but we’d have ‘stopped’ COVID-19. Island nations like New Zealand and even Australia have been able to fight off the virus so far with strict containment measures and border control. For a while, even parts of Europe were able to stave it off. Of course, we all know what eventually happened in Germany, Italy, the U.K., Spain, California, and countless other places that used destructive lockdowns to delay the inevitable. It may be a hard pill to swallow, but lockdowns aren’t worth it, not even a little. 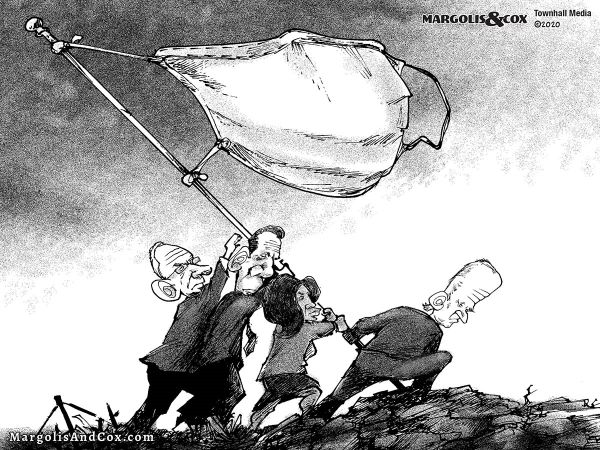 As anyone who reads this column knows, to call masks one of my primary pet peeves is a dramatic understatement. My sheer, unadulterated hatred of the damned things knows no bounds, and neither does my disgust at the tragic fact that our overlords have caused the majority of the public to believe mandatory masking policies stop the spread despite the ever-increasing loads of data that consistently show otherwise. For more than enough evidence, you need simply read Alex Berenson’s new book, or just read my many past entries on the topic. I’ll also point you to this recent Heritage Foundation article that manages to toe the line between proving unequivocally that mandatory masking policies are useless while still deftly trying to keep themselves in favor with Big Tech by contending that masking itself ‘works.’ It doesn’t, but fine, whatever. If YOU want to believe masks work, wear one, wear two, wear EIGHT ... and leave me the hell alone. I can accept that compromise. 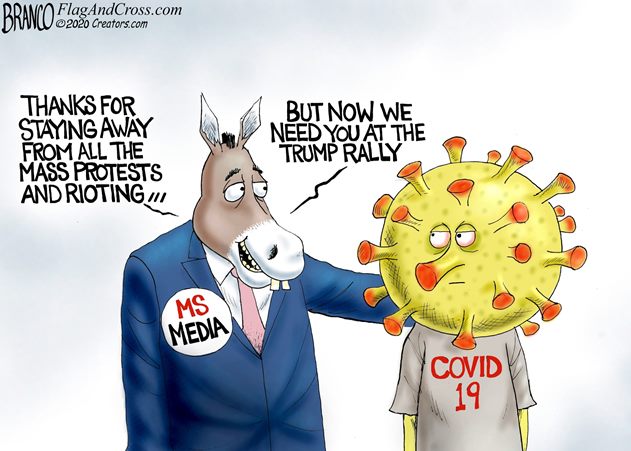 Asymptomatic Spread is a major  driver of Covid-19 transmission...

I’m just going to go ahead and get a bit melodramatic and call the idea of widespread asymptomatic spread being a major driver of the transmission of COVID-19 one of the most destructive myths in all of human history. Why? Because the specter of otherwise normal-looking people going about their lives (people who aren’t sneezing, coughing, and sniffling all over the place, mind you) being able to literally KILL anyone they encounter by infecting them without knowing they even had the virus has formed the basis for every destructive non-pharmaceutical intervention our overlords have tried, from lockdowns to mandatory masking. Thankfully, the lie is slowly being disproved. Will our overlords change their approach to fit the emerging science? Nah, because ‘science’ is only real to them when it fits their narrative. 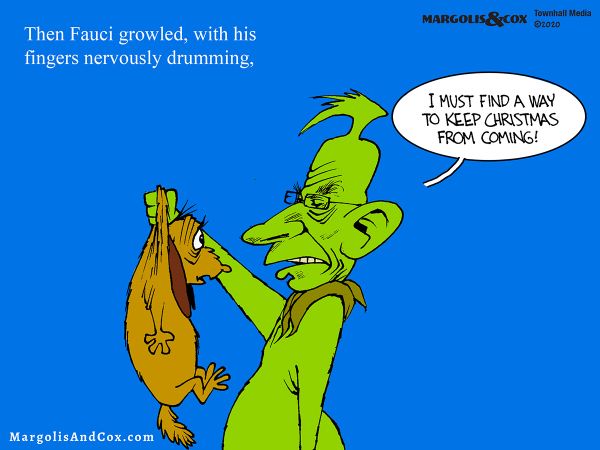 If there ever was a time when the saying ‘When all you have is a hammer, everything looks like a nail’ is completely apropos, it’s now. Health officials may not know anything about operating a business, running a school, keeping an economy from collapsing, or preventing deaths from despair, but they sure do know (or think they know) how to stop the spread of COVID-19 (i.e. the ONLY kind of death that matters in 2020, apparently). Nevermind that none of their measures have actually WORKED to stop the spread of COVID-19, they’ve got a ‘Dr.’ in front of their name, so they must be listened to and obeyed. If something like this happens again, hopefully after I’m long dead, I hope society remembers that health officials should never, EVER be allowed to exert the kind of influence they’ve been able to exert in 2020 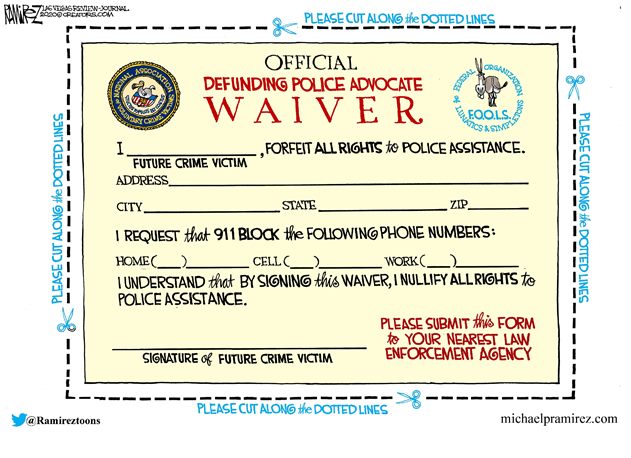 Remember when a drug-addled black man died while in police custody from what turned out to be a heart attack (granted, leaning on his neck was still a BAD idea) and Black Lives Matter burned down the streets of America’s major cities? Remember when Rayshard Brooks was shot after stealing a taser, running, then shooting that taser back at police, and the POLICE WERE CHARGED? Remember when we were told that police were basically racist Bull Connor-types just looking for people of color to take down just for the fun of it? Remember when the powers-that-be told us that police murdered black men at an astonishingly high rate? Well, it’s all a big, giant lie. As researcher Heather Mac Donald proves in this devastating column, systemic police racism is a myth and a destructive one at that. Now, when can law-abiding people get their cities back? 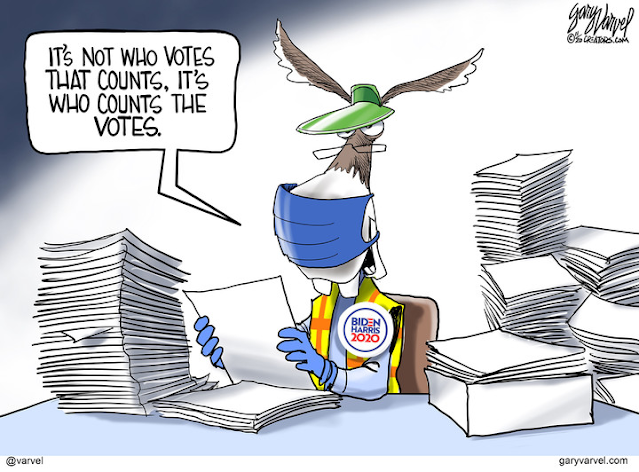 The Presidential Election was Fair and Clean

Sure, not everything alleged by Lin Wood and Sidney Powell turned out to be provable in court, at least to the satisfaction of a sitting judge. We never saw a Kraken, a baby Kraken, or even a Kraken egg. But does anyone who voted for Trump really think no shenanigans took place whatsoever in this election? You may or may not agree, but my theory has always been that they got us with ‘death by a thousand cuts.’ It was truly the perfect storm, and most of it was done well before the election. Use the coronavirus pandemic as an excuse to mail out millions of unsolicited mail-in ballots, then purposefully weaken every working method to weed out fraudulent ones. No need to get all picky about matching signatures or worry that some returned ballots may not be attached to a real voter - count them all! Democracy is at stake! And since far more left-leaning people would have no qualms about cheating (obviously), Biden ‘won.’ No Kraken required. 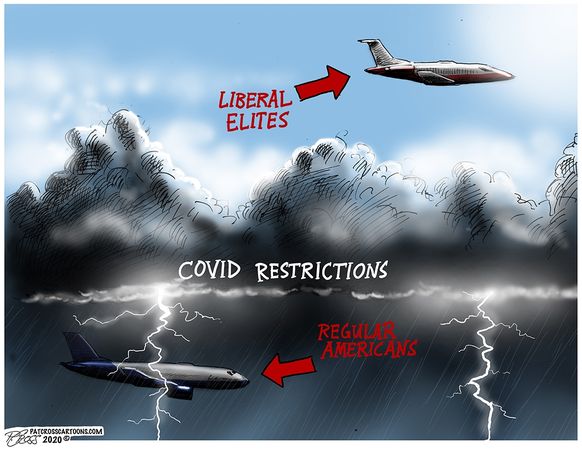 We Are all in this Together

Ah, the do-gooder mantra all those ‘stay-at-home’ Zoom-experts love to quote. Except, we’re NOT ‘all in this together,’ not by a long shot. If you’re fortunate enough to run or be in a business unaffected by the ongoing and coming economic turmoil or have a job you can work from home, you are in no way ‘in it together’ with struggling restaurant & gym owners, some of whom have lost their businesses, or ‘essential’ workers who grind it out every day in grocery stores and supermarkets. The irony of people virtually unaffected by our disastrous response happily making the ‘rules’ for everyone else, then declaring “we’re all in this together” from the comfort of their Zoom rooms is rich beyond imagination.

There you go, my seven top myths of 2020. You will doubtless think of others I missed or weren’t able to include. But even if you don’t agree with all of what’s here, we can certainly all agree on one thing, the fact that we’re all happy 2020 has finally come to an end!

Email ThisBlogThis!Share to TwitterShare to FacebookShare to Pinterest
Labels: 2020