I get emails at work that show airplane incidents from ATB(Air Turn Backs) Gear not retracting, Engine failure, Runway excursions, and  the occasional "Lawn Dart" and so forth.  Well this one came across my list.  I thought it was unique for several reasons.  One, the stresses to break the connections for the motors, Douglas is famous for overengineering and overbuilding their structures so the G-forces had to be excessive.  the 2nd takeaway, it was Venezuela, they refused to release the report in English, but in Spanish only forcing others to translate.  English is the official language of aviation, everyone that is rated in Aviation has to be able to speak it and read it and write it.  Granted in the 3rd world it is kinda a hit or miss proposition.  But the Air Traffic control is in English so everyone understands the instructions so there is no confusion.   With Venezuela I figured it is the "Chavez Effect", he blamed the United States for all the ills of his country rather than the type of government he was running.

If anybody wants the link for the email notifications, hit me on my profile and I will send you the email link so you can subscribe.  this is for commercial aviation only

The link for the article is Here

An Aeropostal Douglas DC-9-50, registratinYV136T performing flight VH-342 from Caracas to Puerto Ordaz (Venezuela) with 125 passengers and 7 crew, made a hard touch down at Puerto Ordaz' runway 07 at about +4.2G causing both engines' (JT8D) pylons and support structures at the airframe to crack and distort nearly separating the engines from the airframe. The airplane slowed safely, stopped on the runway and was shut down. No injuries occurred, the aircraft received substantial damage. The passengers disembarked onto the runway. 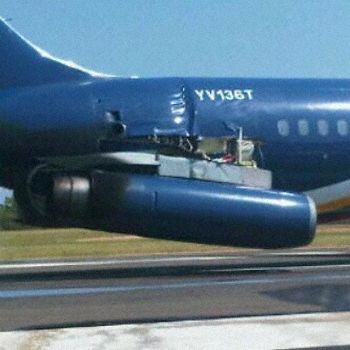 The aircraft was later towed off the runway.No Metars and no local weather station data of Puerto Ordaz/Ciudad Guayana are available.On May 2nd 1980, while conducting certification flights for the MD-80 series on the DC-9-Super 80 registration N980DC, a test pilot unintentionally produced a hard landing, which caused tremendous flexing of the whole airframe resulting in the tail to separate (see video below).Some time in the past Venezuela's DGPIAAE released their final report in Spanish only (Editorial note: to serve the purpose of global prevention of the repeat of causes leading to an occurrence an additional timely release of all occurrence reports in the only world spanning aviation language English would be necessary, a Spanish only release does not achieve this purpose as set by ICAO annex 13 and just forces many aviators to waste much more time and effort each in trying to understand the circumstances leading to the occurrence. Aviators operating internationally are required to read/speak English besides their local language, investigators need to be able to read/write/speak English to communicate with their counterparts all around the globe 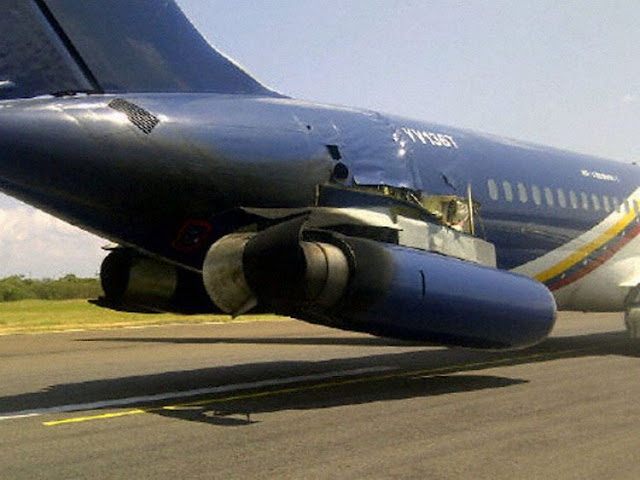 The report concludes the probable causes of the accident were:The investigation based on the characteristics of the occurrence as well as the evidence collected assume human factors as the main cause of the accident, with following causes having been conclusively established:

- Violations of provisions of chapter 4 numeral 6 concerning sterile cockpit of the operator's Operations Manual due to activities, that were not related to the conduct of the flight.

- Lack of situational awareness of training captain, the first officer and the observing pilot.

- Other activities performed by the captain adding to his duties as training captainThe DGPIAAE reported there were three flight crew on the flight deck: a training captain (55, ATPL, 14,000 hours total), a first officer under training to be checked out as first officer (42, CPL, 275 hours total) and a safety pilot (no data mentioned), who in the end played no role and was limited to just an observer in the observer's seat.The DGPIAAE analyzed that the aircraft exceeded the maximum pitch angle of 10.5 degrees permitted during rotation for takeoff reaching 13.2 degrees resulting in the possibility that the tail bumper made contact with the runway surface at that point (according to the FDR the aircraft was maintaining a heading of 100 degrees, unclear magnetic or true, hence unclear runway 09 or runway 10, the DGPIAAE never mentions which runway the aircraft departed from).Subsequently during the approach to Puerto Ordaz the airspeed reduced to 123.8 KIAS resulting in significant loss of lift that contributed to the aircraft hitting the runway hard with a tail strike causing a vertical acceleration of +4.155G and the detachment of both engines.During the final stages of the approach the cockpit has to be kept sterile, however, this requirement was not fulfilled causing the first officer's handling of the aircraft to be neglected. In his interview the captain stated that he was carrying out his monitoring duties of the first officer and was monitoring the approach speed, however, the cockpit voice recorder as well as psychological studies of the captain suggest, that he was occupied with difficulties in his work environment and multiple charges by the company against his person. Additional assessments are needed to identify which factors influenced the first officer's decisions with respect to spatial orientation (lack of experience, age or psychological problems), that jeopardized the safety of the flight by not taking action as quickly as necessary. In their interviews the crew expressed there had been no gusts, down- or updrafts, corroborated by the weather report which stated the winds were calm. 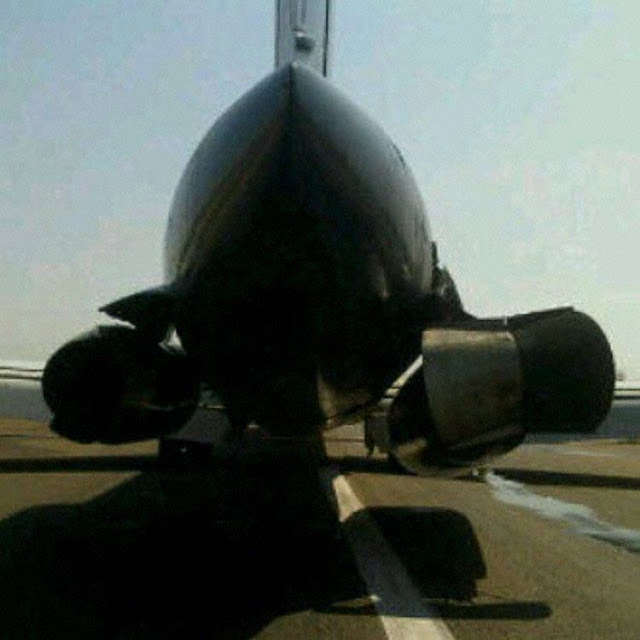 I don't know if this plane is a "Hull Loss", due to the age, and the intransience of the Venezuelans , I don't know how well they will outreach with Boeing(Long Beach), that is the former McDonnell/Douglas offices and Factories when Boeing bought them up in 1997.  They call them a "Merger" but Boeing still had to support the *Mad Dogs* as the McDonnell/Douglas aircraft are called. as long as the planes are in service in the world.

Here is an *oopsie*   The plane landed too hard during a "Certification" flight.  I

Here is a American MD-80 series Aircraft deploying the TR before landing.  Only way they can do that is they first "touched the ground" they tripped the "Squat Switch" which allows landing sequences to start.  A "Squat Switch" is a switch that is on top of the landing gear that is closes a circuit once there is weight on the gear.  It is a safety feature to prevent certain things from being "activated" too early and causing an *oopsie*.