So the Usurper will be sworn in Today.....

Today is a sad day in America when a guy that has a  Political machine that basically stole an election and something that I have noticed, there is no excitement for the Joe and the Hoe.  people are expecting the other shoe to drop at any time. 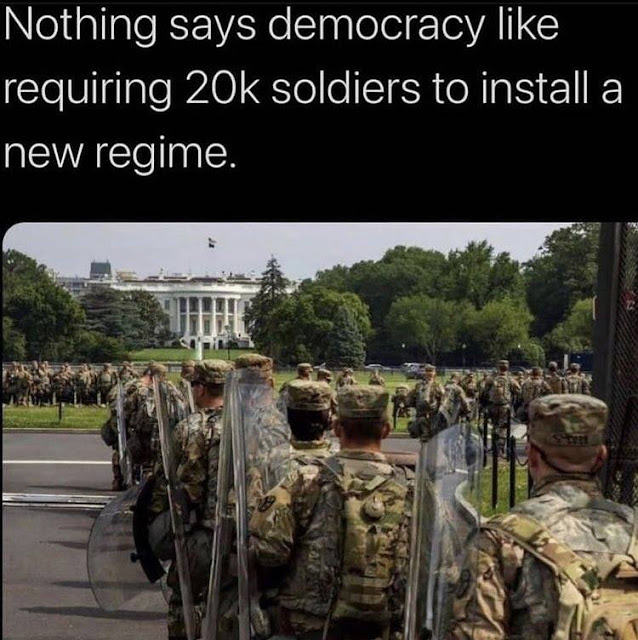 I'm going to put the same thing on my Farcebook and twatter page to see if they have to balls to ban me and I don't give a crap.

Hey, you guys have fun at the festival of Establishment onanism that will be the purported inauguration of that desiccated old weirdo, President Asterisk. Despite the questionable election process and slobbering media cheerleadin', they still barely managed to drag that tiresome zombie and the Presidentrix-To-Be over the finish line. I’m not celebratin’ nothin’.

The best part of Dementiafest 2021 is that it will be a sullen, sad affair installing the manifestly senile old pervert at the head of the ricketiest administration in memory while surrounded by at least two divisions of soldiers lest a gigantic army of dudes in Viking drag decide to show up. The bored troopers of the various National Guards of blue states, whose governors are making a huge show of sending their warriors out for the photo op because of the perilous peril of Fake Insurrection II, will be practically the only audience. I can only imagine what will be going through their heads as they stand there, under orders to feign attention to the rambling windbag up on the dais who is going on and on about the need for unity and the perfidy of those knuckle-dragging, gun-loving Jesus people of racism who must be completely excluded and disenfranchised because their interests conflict with those of the ruling caste.

I’m sure the Fredocon contingent will politely applaud the peaceful stealing of power, gently slapping their soft, girlish hands together before returning to their offices, loosening their bow ties, and pouring themselves a nice cup of chamomile tea as they prepare to crank out another barely noticed blog post on why True Conservatism™ totally requires that we all support the leftists in silencing the speech of the competitors of Conservative, Inc.

Have they ever demanded that a liberal be, to use the current term, deplatformed? Nah, these lapdogs would never bite the hand that feeds them scraps. We all stopped writing checks when they stopped pretending to fight for conservatism, but no worries. The Silicon Valley overlords stepped in to help, offering a Faustian bargain, which the hacks eagerly accepted. And the libs got their 30 pieces of silver’s worth

The best part, the most delicious irony, is how back when the Wormtongue contingent was grifting us for all those years, one of their go-to pivots for dunning donors was an endless series of pleas to help fight the battle against those mean old libs at Gumbo State who were shutting down conservative speech on campus. Send money now to fight the fight! Many a lido deck panel pontificated on the threat of censorship before everyone adjourned to enjoy a refreshing Zima and vie for the attention of the fussy likes of Jay Nordlinger as he made a pass through the throngs of assembled suckers. Ahoy!

The Establishment converted Washington, DC, into a fortress guarded by troops strewn about on cold marble floors because that looked more compelling than showing them in cots and sleeping bags on sleeping mats that every one of them was issued. This is supposed to send a message of strength and resolution in response to a small riot that would barely have made the papers last summer but is now three of the four Horsemen of the Apocalypse because it happened at the Establishment’s house instead of at Sen. Josh Hawley’s house, or your house. When it was your business on fire, it was a mostly peaceful protest, and you needed to get over it. When it happened to the people who let last summer fester, well, then it was an insurrection/coup/sedition for totally real. Hence, they summoned more soldiers to Washington to make sure a ceremony that nobody but the elite cares about goes off A-OK. Just think of what those soldiers could do stopping the bloodshed in Chicago, where the average Friday night sees exponentially more carnage than what those goofs – who seem to include some leftists – committed on Capitol Hill.

First on the Senate agenda will not be the Biden* program but the continuing effort to keep Trump in the news. The impeachment that moved faster than Brian Stelter, who is a potato, toward a chocolate doughnut will land with a thud in the Senate and then die there. I doubt there will even be a trial, not just because you can’t impeach someone who is no longer in the job you are impeaching him from but because a trial allows a discussion of contrary evidence, and the narrative can’t take that. We’ve already seen that some of the invaders were anti-Trump leftists. They are also backpedaling on the “Hang Pence” stuff. Now, we’re also seeing that the FBI knew of the planning long before. This is all kind of hard to square with the Official Truth™ that the bad Orange Man incited the riot by observing to his audience on the Mall that they would soon be “marching over to the Capitol building to peacefully and patriotically make your voices heard," when the rioters planned to riot already. The flex is, of course, to argue that Trump pointing out the manifest flaws of the manifestly flawed election was itself incitement. It’s not really necessary to make a slippery slope argument about how this has the effect of criminalizing all dissenting speech when the point of the exercise is to ski down that slippery slope.

That we will be skipping the virtual inauguration is not to say that we have nothing to celebrate. We do. The fight begins anew. Many of us are energized. We have exposed some more squishy Establishment-loving weak links in the Cheney, as it were. We will primary them. We will make our GOP state legislatures clean up the crooked election system and impose a Social Media User’s Bill of Rights upon the digital dictators. We will continue to speak out, and if suppressed here, we will go pop up there and then pop off with twice the vigor. We will never surrender.

In fact, January 20 will inaugurate our offensive to take back our country.