The C.S.S. Stonewall, the Last Ironclad of the Confederacy. And a ship that would sail under 6 flags

I ran across this little tidbit of History following another rabbit hole and compiled an article, the pics are compliments of "DuckDuckGo" 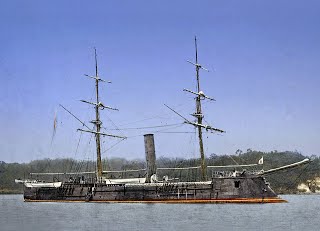 Patterned as she was on the revolutionary French Battleship Gloire, on paper she seemed formidable. She was 194 feet in length, 31.5 feet at the beam, drew 15.75 feet of water and displaced 1560 tons. Her hull was protected by 4.5 inches of armor amidships tapering to 3.5 inches at the bow and stern. Up to 24 inches of hardwood backed this iron carapace. A casemate forward sheathed in 5.5 inches of iron housed a pivot mounted, breech loading, 300 pounder Armstrong gun. A fixed turret aft covered in 4 inches of armor contained two 70 pounder breech loading Armstrong guns. In keeping with naval tactics at the time, she was also equipped with a ram. Steam powered with a top speed of 10.8 knots, twin screws coupled with twin rudders made her remarkably maneuverable for a ship of her size and displacement. Unfortunately, her bunkers held only 280 tons of coal limiting her ability to steam for prolonged distances. For longer voyages she was fitted with a bowsprit and two square rigged masts. Steam power, thick armor and modern guns made her a ship to be feared.

In reality she was poorly constructed, leaked badly, drew too much water and wallowed dangerously in heavy seas. Several months of extensive repairs were required to make her truly sea worthy. Only then would she begin to live up to her reputation.

Her name was Sphynx; her sister ship was called Cheops. Ostensibly they were being constructed by Jean-Lucien Arman, one of France's most respected shipbuilders, for the Egyptian Navy, but that was a ruse. In 1863 the Confederate States of America were being slowly strangled by the Union blockade. The Confederacy had sufficient industry to cobble together a few ironclads that performed surprisingly well in riverine warfare and in coastal waters. These warships had an impact far greater than their numbers. Ocean going ironclads capable of breaking the blockade that was choking the Confederacy were beyond her capability however. Accordingly, Confederate Secretary of the Navy Stephen Mallory sent agents to Europe to procure ironclad warships that would splinter the mostly wooden hulled Union Navy. His agents, John Slidell and James Bulloch, had some success in England obtaining the famous or infamous, depending upon your point of view, CSS Alabama, among others. As the American Civil War drug on however, Britain became an increasingly difficult partner. Turning to France, Napoleon III agreed to provide warships but since this act was against French neutrality laws, only if their ultimate destination remained secret, hence the fiction of Sphynx and Cheops. A shipyard clerk scuttled that subterfuge by going to the United States Minister in Paris and informing him of their true destination. When the United States officially protested, the sale was cancelled. Albeit illegally, the devious shipbuilder, Arman, was able to sell the Cheops to Prussia and the Sphynx to Denmark, who were currently involved in the Second Schleswig War.Renamed the Saerkodder (Strong Otter), she left Bordeaux on 21 June 1864, sailing with a Danish crew. The voyage to Copenhagen revealed numerous sea-keeping problems and construction flaws. A very disappointed Danish government demanded repairs and a steep reduction in price. Negotiations between the Danes and Arman became contentious, drawn out and finally broke down. By this time the war between Denmark and Prussia had ended and Danish interest in the Saerkodder ended with it.The Sphynx / Saerkodder kept returning to Arman. The scheming shipbuilder approached Bulloch regarding Confederate interest. By this point in the war only a few southern ports were still open, most had been captured or were closed by blockading Union warships. Desperate times called for desperate (and expensive) measures. The CSS Virginia had sown panic in the north during her all too brief career. An even more powerful ironclad might do the same. It was slim hope, but it was hope. Accordingly, Arman was able to broker a deal through his agent, Arnous de la Rivière, to resell the Saerkodder to the Confederate States for 450,000 francs. Thus, on 07 January 1865 the Confederate States Navy acquired its first and only European built oceangoing ironclad. Now called Olinda to maintain the fiction of legality, she sailed from Copenhagen toward the English Channel with a makeshift crew, under a Danish captain, and with Captain Thomas Jefferson Page, CSN, onboard. The plan was to rendezvous with the blockade runner City of Richmond at sea to take on supplies and her permanent crew, primarily sailors from the CSS Florida which had been seized 04 October 1864. A severe gale forced Olinda to take shelter in Kristiansand, Norway and drove the City of Richmond into Cherbourg, France. The two ships finally met on 24 January 1865 near the island of Houat off the coast of Brittany. The crews transferred and in a brief ceremony at sea the Danish flag was hauled down and the Confederate ensign raised. Thus, the Olinda became the CSS Stonewall, in honor of General Stonewall Jackson, mortally wounded at Chancellorsville. Before she could cross the Atlantic however, additional supplies, full bunkers of coal and repairs to damage caused by the gale were necessary. Stonewall first took refuge in Á Coruña, Spain and then on 12 February 1865 moved to El Ferrol which had better repair facilities. The United States government argued that Stonewall should be considered a pirate vessel and offered no assistance. Spain ignored those diplomatic protests and ship and crew were offered every courtesy in accordance with neutrality law. 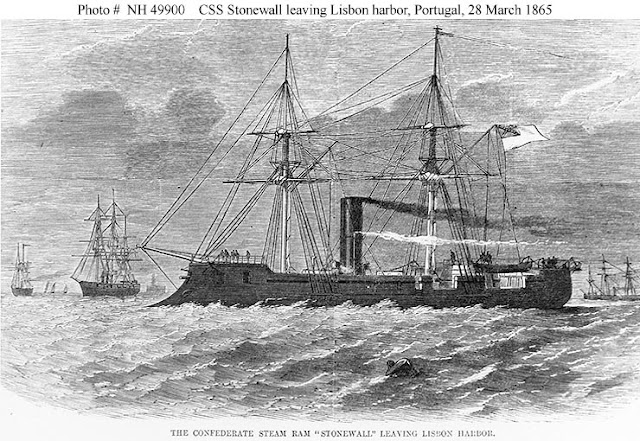 Steaming from El Ferrol on 24 March 1865 Stonewall was confronted by the steam screw frigate USS Niagara and the steam screw sloop of war USS Sacramento. These ships were under the overall command of a naval officer with the unfortunate name of Commodore Thomas T. Craven. In spite of an untried ship and an untested crew Captain Page eagerly sought battle. Although Niagara was larger than Stonewall and both of his ships were faster, threw a greater weight of shell [1] and were manned by veteran crews, Commodore Craven, based solely on Stonewall's reputation, took council of his fears and declined to engage the Confederate ironclad. For his inaction Commodore Craven was later tried by Courts Martial.

The non-battle off Ferrol was a great disappointment to her citizens who were hoping to witness something like the epic duel between the USS Kearsage and the CSS Alabama. Instead the Union ships used their greater speed to remain out of range. Unable to engage their reluctant enemies, Stonewall made way for Lisbon, Portugal, arriving on 28 March 1865 to take on supplies and coal. Before crossing the Atlantic she made one last stop at Tenerife (01 April 1865) to take on coal and resupply. Departing Tenerife she sailed for Nassau in the Bahamas arriving on 06 May 1865. There her crew learned of the surrender at Appomattox. Resolved to capitulate on his own terms, Captain Page steamed to Havana, Cuba. On 19 May 1865 [2] Captain Page sold the Stonewall to the Spanish Captain General of Cuba for sixteen thousand dollars in order to pay off his crew. In July 1865 Spain transferred the Stonewall to the United States for the same amount. Moved to the Naval Shipyard in Washington, DC Stonewall was decommissioned and sat in lay up for nearly three years until the Japanese expressed an interest in her. Preparing for war with the Imperial Japanese government during the Meji Restoration [3] the Tokugawa Shogunate offered the United States $30,000 down and $10,000 upon delivery of the vessel. The offer came at an opportune time for in 1868 the United States was rapidly demobilizing its army and navy which, during the Civil War, had become the largest in the world. The victorious Union had a surplus of vessels, among them the vessel described above, the former ironclad ram CSS Stonewall, which were being decommissioned and hurriedly laid up as their crews were discharged. The United States also had huge war debts to pay off. The offer was accepted and manned by a Japanese crew with a small American training crew onboard the Stonewall became the Kotetsu (Ironclad) and set sail for Japan.During the time it took to sail from the Washington D.C. Navy Yard where she was berthed to the port of Shinagawa in Tokyo Bay the Boshin War between the Tokugawa Shogunate and the Imperial Japanese (Meiji) government erupted. In keeping with International Neutrality Laws the American Resident Minister, Robert B. Van Valkenburg, voided the sale and ordered the vessel placed under United States flag. Fatefully in February 1869 that decision was reversed and the transfer completed but to the Meiji government rather than the Tokugawa Shogunate who had purchased her.Kotetsu became the flagship of the Imperial fleet and commanded by Captain Shiro Nakajimo immediately sailed with a squadron of seven warships to the island of Hokkaido. Kotetsu was instrumental in the 25 March 1869 victory over Shogunate forces at the naval battle of Miyako Bay. The Imperial fleet, including Kotetsu, supported the invasion of Hokkaido which led to the conclusive attack on the Shogunate stronghold of Hakodate. Thanks in no small part to the efforts of Kotetsu, the most modern and most powerful warship in the Imperial fleet, the remaining forces of the Tokugawa Shogunate surrendered to Meiji forces on 25 May 1869. Japan became an empire and America became a kingmaker. 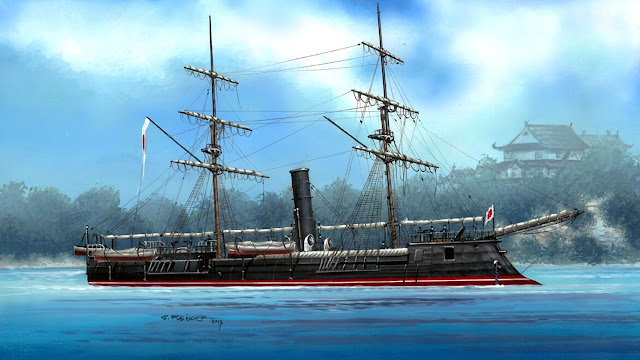 Renamed Azuma (East) on 07 December 1872, ironically, Azuma played a major role in the suppression of the Saga rebellion, the Satsuma uprising and the expedition to Formosa (Taiwan) in 1874. Azuma was decommissioned on 28 January 1888 but continued to serve as a training and barracks ship for another ten years. After serving under French, Danish, Confederate, Spanish, American and Japanese flags she was broken up and scrapped in 1908.

Had the Stonewall and the other warships [4] ordered by the Confederacy been completed and delivered in a timely fashion they might have been a factor in the outcome of the American Civil War. As it was the Stonewall never fired a shot in anger as a Confederate States Ship. As the Kotetsu however she played a prominent role in the outcome of the Boshin War, thus ending the 268-year reign of the Tokugawa Shogunate, launching Meiji rule, setting Japan on the course to Empire and eventual conflict with the nation that provided her.