December 25th, A Day that Changed America and gave us Hope.

I remember General Washington attacking the Hessians on Christmas day 1776, the revolutionary War wasn't going well, the Colonial Army had been pushed out in several battles with the British Army, and the Crown had hired Mercenaries,  auxiliaries to the British Crown,  Hessians from the German State of Hesse-Cassel and Hesse-Hanau.  Apparently hiring out of troops was quite a cottage industry for the kingdom.  Europe had a bunch of little wars and Hesse equipped their own troops, trained them and they were quite good by the standards of the day.  it was cheaper for King George to hire them than bring in more troops from other colonies, they were there to augment the Kings war effort here.  The Hessians were about 25% of the total manpower outlay in the 13 colonies.    George Washington attacking the Hessians when he did pretty much saved the American Revolution, it gave us hope that we could win this thing, and it shocked the British and Germans that the Americans were no pushovers.  Baron Von Steuben who was Prussian came to Valley Forge and Taught the ragtag American Army the drill and discipline necessary to stand up to the British and not break when they came at you with the bayonet. 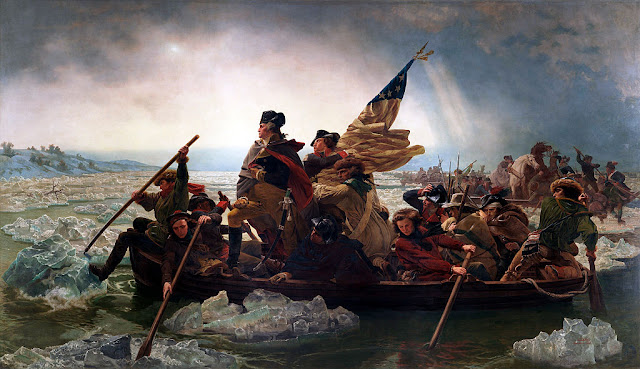 It was Christmas Day, December 25, 1776, the western bank of the Delaware River. Among the tattered, freezing troops at McConkey’s Ferry late that afternoon was General George Washington, architect of a planned strike against three regiments of Hessian troops wintering across the ice-choked river at Trenton, New Jersey.

It is said that genius and madness are at times virtually indistinguishable and, considering the state of the American Revolution at the time, a fair observation when weighing Washington’s chances of success, even now, from the distance of 300 years.

The operation was the offspring of pure desperation, a dreadful state-of-affairs, rapidly approaching implosion. The British and their Hessian auxiliaries were at full strength, for instance, the Continental Army a shadow of its former self. Due to repeated defeats, failures, and retreats, Continental currency was on the verge of collapse, credit nonexistent, food hard to come by.

The American public, its enthusiasm critical for the war effort, was nearing demoralization. On December 18 Washington had written his brother, Samuel, solemnly admitting that “if every nerve is not Straind to recruit the New Army with all possible Expedition, I fear the game is pretty near up.”

True, since then Washington had been reinforced, bringing his effective strength up to 7,600, but most of those enlistments would be up by month’s end, hence the army a phantom by early January, if it still existed at all.

There are moments so grim that what previously seemed like lunacy suddenly makes perfect sense, the wildest option the only option still available. In that sense, on the 25th of December 1776, for General Washington the discerning finger of logic was pointing directly, and emphatically, across the river at Trenton.

To bring that logic to life, the general had opted for a sophisticated, three-pronged attack, a plan that even in good weather with well-trained troops might prove challenging, better yet in difficult winter conditions with men on the brink of starvation. Nevertheless, the plan was for three separate columns to converge on Trenton simultaneously, one of the most difficult things in warfare to accomplish.

The main column – 2,400 men – was to crossover the Delaware at nightfall, be entirely across – artillery, horses, and all – by midnight, then march nine miles south to Trenton. At the village of Birmingham, north of Trenton, the main column was to split, one branch under General Sullivan continuing south along the River Road directly into town, the other under General Nathanael Greene, looping north and entering simultaneously from the opposite direction.

But hold on, there was more. Additionally, General Ewing was to cross the river directly opposite Trenton with 700 men and seize the bridge over Assunpink Creek south of town, preventing a Hessian retreat in that direction. Lastly, a force of 1500 men under General Cadwalader was to crossover farther south at Bristol, at once creating a diversion and blocking any British reinforcements advancing from Philadelphia.

The attack on Trenton proper was to step-off at first light, December 26. Indicative of the do-or-die nature of the mission, the password was “Victory or Death.”

On paper the plan looked splendid, but war-plans often look splendid on paper. Unfortunately, due to the brutal winter storm then blowing-in and heavy ice-flows in the river, neither Ewing nor Cadwalader would fulfill their assignments. Unknown to Washington, he was on his own.

Typically, the crossing got started late. The troops were taken over in Durham boats from the nearby Durham Iron Works. Built to transport ore downriver, they were large, black boats, sixty-to-forty feet in length, with an exceedingly shallow draft – perfect for Washington’s mission.

The troops were poled over, often forty men standing, the artillery and horses on larger ferries. John Glover’s regiment of sturdy Marblehead fisherman supplied the knowhow and muscle, even so, the entire army was not across until 3:00 AM, dangerously behind schedule.

John Greenwood, a sixteen year old from Boston, was one of the first over, and recalled: “We had to wait for the rest and so began to pull down the fences and make fires to warm ourselves, for the storm was increasing rapidly. After a while it rained, hailed, snowed, and froze, and at the same time blew a perfect hurricane.

Through the howling winds and blinding snow of a true nor’easter, the column started toward Trenton, Washington riding the line, tirelessly encouraging his troops forward. As temperatures plummeted, bloody footprints marked the route southward. Two exhausted men staggered from the column and collapsed, only to be discovered later, frozen to death. Going was painfully slow, but somehow the column finally gained Birmingham where it divided, as planned.

Washington rode north with Greene, as Sullivan continued along the River Road. It was well passed sunrise before both columns finally found Trenton. Somehow, almost amazingly, they had not been spotted, the raging storm having provided cover. Suddenly a rider appeared from General Sullivan, advising Washington that, due to the sloppy weather, his men’s muskets were inoperable. But retreat, now, was impossible. Fiercely determined, Washington told the courier to return and tell Sullivan: “Use the bayonet. I am resolved to take Trenton.”

Around 8:00 o’clock, just north of Trenton, Washington split Greene’s force into three attacking detachments and, on horseback, led the center attack forward himself. Heavy snow was still flying as a Hessian lookout spotted the approaching Americans and shouted, “Der Feind!” (the Enemy!).

Shots rang-out as Hessian infantry fired, then retreated before the weight of the American advance. More Hessian infantry rallied, attempting to repulse the Americans on the north side, momentarily leaving the River Road undefended. As Washington’s assault entered Trenton, the sound of cannon-fire became suddenly audible from the south – somehow, despite all the adversity, the twin attacks had coordinated almost perfectly, and Ewing’s boys were firing their artillery from across the river. Sullivan, after chasing-off a Hessian picket-post, advanced into Trenton unopposed.

Trenton was then a small town, about 100 houses – now mostly deserted of inhabitants – built on two central streets, King and Queen. Myth has it the Hessians had been drinking and partying heavily on Christmas, hence sleeping or hungover as Washington’s troops attacked, but this is folklore.

The three Hessian regiments – 1,500 combined strength – were under command of Colonel Johann Rall, a veteran commander with a sound, if uninspiring reputation. They had arrived on December 14, eschewed defensive fortifications, but had patrolled regularly on the lookout for raiding parties. The Hessians – fierce warriors with a reputation for barbarity from the German principality of Hesse-Cassel – had a low opinion of American fighters and leadership, hence they expected minor, aggravating raids, but hardly a major blow.

Now, faced with an overwhelming blow, near panic ensued.

American artillery quickly unlimbered at both ends of town and began sweeping the streets, as Continental troops advanced. Rall formed two of his regiments at the bottom of King Street, but they were quickly broken under intense artillery fire.

Fearing encirclement, the Hessian leader attempted to lead an advance, but this, too, was blown apart. Street fighting ensued, but the Hessian’s weapons fouled due to the snow, and many were cut down in the streets and alleyways. Rall eventually led two regiments to an orchard north of town where he tried to flank Washington’s troops. But this effort was spotted and shredded by enfilading musketry and artillery fire. Rall, riddled with bullets, tumbled from the saddle

Overwhelmed, many Hessians ran for the hills, but most were eventually surrounded and forced to surrender. It was all over in less than an hour.

The Hessians suffered 22 killed (including Rall), 83 wounded, and 896 taken captive, while the Americans suffered only 5 wounded and two dead – the two who had frozen to death on the march. Additionally, falling into American hands was over 2,000 small arms, barrels of ammunition, numerous cannon, horses, and the Hessian’s entire supply of food, drink, shoes, and clothing.

Amazing as these totals were, they fail to grasp in any meaningful sense the true impact the engagement had on the country. It would not be overstatement to suggest that news of Washington’s victory utterly electrified an American public previously benumbed by the war. Of Trenton, author Mercy Warren wrote: “From the state of mind bordering on despair, courage was invigorated, every countenance brightened.”

Coupled with Washington’s return to Trenton less than a week later, his daring nighttime escape from Cornwallis’s clutches, then victory over the British at Princeton the following day, the American cause, like Lazarus rising from the dead, seemed virtually overnight to have returned from life-support to the land of the living. Indeed, Frederick The Great – who certainly knew something of war – called Washington’s campaign “the most brilliant of any recorded in the annals of military achievement.”

Yet perhaps the most insightful comment was delivered nearly a century later, when British historian, Sir George Otto Trevelyan wrote, “It may be doubted when so small a number of men ever employed so short a space of time with greater and more lasting effects upon the history of the world.” Unbeknownst to them at the time, George Washington, and his small band of starving, freezing, yet willing compatriots, had just changed the world.