I have heard this bandied about from several talk show host(ess?) and they all talk about how great a new constitutional convention would be.   An article from Bloomberg news made mention of it.  Here are some excerpts:

Rising frustration with Washington and conservative electoral victories across much of the U.S. are feeding a movement in favor of something America hasn't done in 227 years: Hold a convention to rewrite the Constitution.
Although it's still not likely to be successful, the effort is more serious than before: Already, more than two dozen states have called for a convention. There are two ways to change or amend the founding document. The usual method is for an adjustment to win approval from two-thirds of the Congress and then be ratified by three-quarters of the states. There have been 27 amendments adopted this way.
The second procedure is separate from Congress. It requires two-thirds of the states, or 34, to call for a convention. The framers thought this was necessary because Congress wouldn't be likely to advance any amendments that curtailed its powers. But this recourse never has been used.
Two states, California and Vermont, have called for a convention to overturn the Supreme Court's Citizens United decision that permits huge amounts of unregulated money into federal campaigns. Larry Sabato, a University of Virginia political scientist, wants a convention to adopt sweeping changes, including a single six-year presidential term and concomitant House and Senate terms, to create more of a parliamentary system. Petitions to adopt term limits for members of Congress have circulated for years.
But much of the current impetus comes from fervent fiscal conservatives. This includes calls for an amendment requiring a balanced budget and other restraints on the federal government's spending and taxation powers.
A constitutional convention is a rallying cry for right-wing talk-radio hosts such as Rush Limbaugh and Mark Levin; the idea has been endorsed by Senators Ron Johnson of Wisconsin and Oklahoma's Tom Coburn, both conservative Republicans. An influential backer is the American Legislative Exchange Council, known as ALEC, an organization of conservative state legislators and private sector lobbyists that advocates for corporate interests.
However, many constitutional scholars believe that limits cannot be placed on a convention; if one were convened, anything could be up for consideration. A convention "can propose what they think is appropriate," says Michael S. Paulsen, a professor at the University of St. Thomas law school in Minneapolis who is an expert on the issue. "There is no good theory under which the convention can be 'limited' to specific topics -- far less to a specific proposed `text.'" 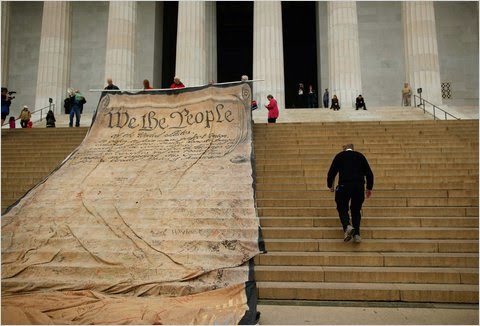 Accordingly, say experts such as Walter E. Dellinger, a former U.S. solicitor general and a constitutional scholar, no limits can be imposed on calls for a convention. That's why he believes the current petitions from states, even if they reach the two-thirds mark, are invalid.
"Thirty-four times zero is still zero," he says.
If, however, the backlash against Washington intensifies, the Republican-led Congress stalls, these imperfections are corrected and a convention were held, Congress would play a relatively minor role. It might decide how the size of different delegations should be determined. After the federal lawmakers "specify the time and place for kicking it off," Paulsen says, "they then have to get out of the way."
Although it's chiefly the political right driving this proposal, there are more than a few staunch conservatives who say it's a bad idea. Foremost is U.S. Supreme Court Justice Antonin Scalia, the longtime leader of the court's conservative bloc, who observed this summer: "Whoa! Who knows what would come out it?"
Some proponents argue that a check on any convention deliberations would be that three-quarters of the states then have to ratify any decisions, so radical stuff such as changing the First Amendment wouldn't fly. "That is a huge hurdle," Paulsen says.
Yet other observers such as Dellinger worry about the possibility of a run-away process that could rattle both the left and right. They doubt that modern-day James Madisons or Alexander Hamiltons would be in attendance to temper the proceedings.
I have several issues about this....First off FedGov ignores the constitution now....if there was an amendment to further curtail it, they would just ignore it also.  Also I have doubts about the issues that would be raised, keep in mind that the democrats are very adept at raising a "rent a mob" very quickly....Imagine a "Living Wage" addendum added, or some of the other "manufactured rights" to make an appearance and make it on and the original people that wanted to "do a constitution convention" to rein in the .gov colossus, but I can see it being usurped  by the democrats, especially if they have the convention in a major urban area...I can see the rent a mob, democratic constituents, free loaders, Marxist, socialist, Earth First and a myriad of other groups and packaged as " we the people".  When there is such a stranglehold on the free exchange of ideas and ideas being squashed because it might offend some core constituency and the mob taking the power and running with it.  You doubt me?  Compare the U.S. Constitution from the constitution from the European Union, that is what happens when lawyers get hold of a document.  Our U.S. Constitution has the bill of rights enshrined in it....you know the Bill of rights...rights that we already have from our creator and codified and the job of government is to prevent our NATURAL rights from being infringed..whereas the E.U constitution is full of socialist platitudes where the government grants these rights...and what government grants, they can strip away on a whim.   I don't like the idea....we will have to find another way to roll back the collusus that is the Feds.  A con-Con is a bad idea
Posted by MrGarabaldi at 9:11 AM

Email ThisBlogThis!Share to TwitterShare to FacebookShare to Pinterest
Labels: bill of Rights, U.S.Constitution