I am still at camp and this is also loaded into my scheduler thingie from Blogger, so far it has worked as advertised and I am cool with that. 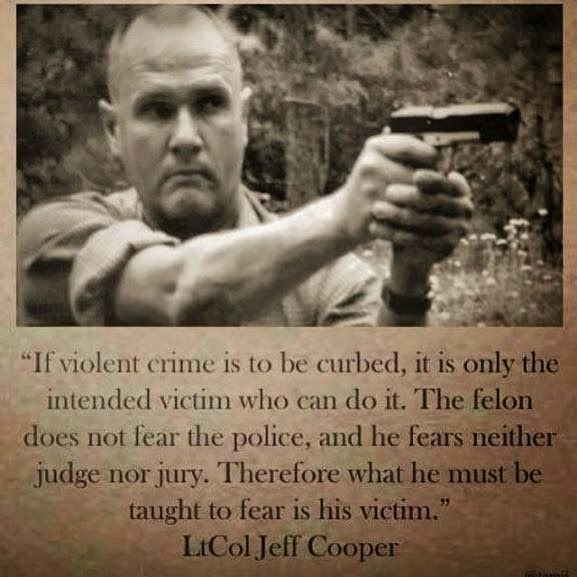 The average thug don't fear the police because they know that the police have to operate according to a certain code of conduct, and rules that are imposed upon them by society and the politicians.  The same rules control the courts so a thug will know that he will be treated leniently by the courts.  So the only thing a thug fears is the armed victim.  A thug is by nature a bully, he, she, it use force either physical force through their strength, or weapons.  or they use mental force of personality or the threat of force to get what he, she, it wants.  If a thug attacks a victim and discovers that the victim has "teeth" as it were, it totally derails the course of action.  An armed "victim" will not give them what they want and they have to hope to persuade the victim to let them leave because their own life is the most important thing they have.  other people lives mean nothing to them....their own life is precious.  A "Victim" that is attacked by a thug isn't governed by the same code of conduct as the courts or the police.  The victim can and most will use all the force they have...and usually is a bad ending for the thug....the phrase D.R.T usually comes to mind.
Posted by MrGarabaldi at 2:00 PM

Email ThisBlogThis!Share to TwitterShare to FacebookShare to Pinterest
Labels: 2nd amendment, Self Defense