On this day 50 years ago....Rudolph the Red Nosed Reindeer was broadcast.

On this day 50 years ago, a momentous occasion transpired.  Rudolph the Red Nosed Reindeer was broadcast.  This special is still played every-year.  It was a staple of my childhood as with many other people.  This is why this cartoon has stood the test of time.   There is another cartoon that I like that started recently is the Prep and landing series 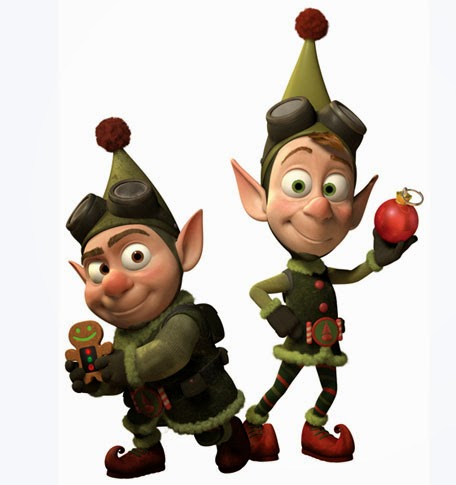 I have seen Rudolph many times and I will watch it again when it comes on this year, unless I have scouts, Church youth group, Tuba practice(for Short and Noisy A.K.A. My Son) or basketball practice.

Rudolph the Red-Nosed Reindeer is a Christmas television special produced in stop motion animation by Rankin/Bass Productions and distributed by DreamWorks Classics. It first aired Sunday, December 6, 1964, on the NBC television network in the United States, and was sponsored by General Electric under the umbrella title of The General Electric Fantasy Hour. The special was based on the Johnny Marks song "Rudolph the Red-Nosed Reindeer" which was itself based on the 1939 poem Rudolph the Red-Nosed Reindeer written by Marks' brother-in-law, Robert L. May. Since 1972, the special has aired mostly on CBS affiliate television stations, with the network unveiling a high-definition, digitally remastered version of the program in 2005. As with A Charlie Brown Christmas and How the Grinch Stole Christmas, Rudolph no longer airs just once annually, but several times during the Christmas and holiday season and on several cable channels (including ABC Family). It has been telecast every year since 1964, making it the longest running Christmas TV special in history, and one of only four 1960s Christmas specials still being telecast, the other three being A Charlie Brown Christmas, How the Grinch Stole Christmas, and Frosty the Snowman 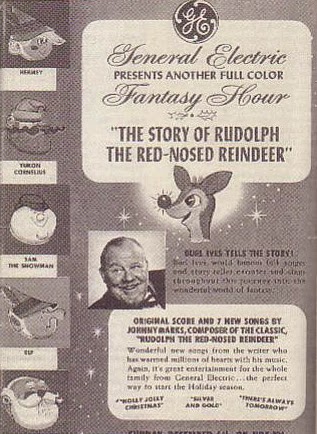 Santa Claus's reindeer Donner's wife gives birth to a fawn named Rudolph, but the two are shocked to discover that Rudolph's unusually red nose is capable of glowing. When Santa Claus visits their cave to meet the fawn and sees the glowing nose, he warns Mr. & Mrs. Donner that Rudolph won't be able to pull the sleigh if he continues to carry this trait for the rest of his life. Consequently, Donner tries to conceal Rudolph's nose at first with mud and later a small round cap.
A year later, Rudolph's parents take him out to the reindeer games where Rudolph, along with all of the other young bucks, will be trained to fly and pull Santa's sleigh when they get older. There, Rudolph meets a friendly reindeer named Fireball and they quickly become friends. The pair then sees a group of does including one named Clarice, who seems to love Rudolph. Fireball then encourages Rudolph to speak with her. She thinks he's cute which causes Rudolph to perform a dazzling leap into the air and fly. However, when Rudolph and Fireball engage in celebratory play, the cover pops off Rudolph's nose and unveils his "non-conformity," scaring Fireball and ending their friendship. All of the other yearlings then make fun at Rudolph's nose and he is not allowed to join in any more reindeer games. Clarice, who is not the least bit bothered by Rudolph's secret, catches up with the sulking Rudolph to try to comfort him. Soon after, Clarice's father forbids her to hang around with Rudolph, breaking his heart and runs away. Meanwhile, an elf named Hermey 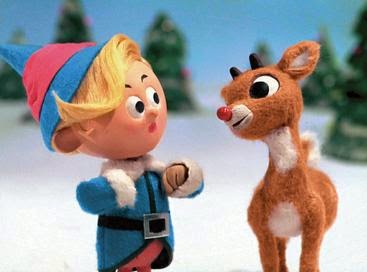 dreams of becoming a dentist rather than making toys. His supervisor is outraged at his persistent disruption with his dentistry studies. Feeling ridiculed and misunderstood, Hermey also decides to run away. Later, Rudolph meets up with Hermey and the pair decide to set off together.
Along the way, they meet a cheerfully and boisterous prospector named Yukon Cornelius, who dreams of discovering silver and gold, before the trio bumps into the Abominable Snow Monster who is attracted to Rudolph's nose. Escaping on an iceberg, they arrive on the Island of Misfit Toys where unwanted toys live with a winged lion named King Moonracer, until he can find homes for them. The king agrees to let them stay for one night in exchange for a promise from Rudolph that as soon as he, Yukon, and Hermey return, they will ask Santa to deliver the Misfit Toys to children who need them. However, Rudolph decides to leave the island alone knowing that his nose will endanger his friends.
Rudolph grows older and drifts from place to place, making and losing friends as he is continually rejected for his glowing nose. Eventually deciding to go home, he returns to his cave to find that his parents, along with Clarice, have left to search for him. Rudolph then sets out to find his family and discovers that they have been captured by the Abominable Snow Monster, who plans to eat them. After a brief fight, Rudolph is knocked unconscious. Fortunately, Hermey and Yukon Cornelius arrive and hatch a rescue plan. Luring the monster out of the cave, the pair knock the Snow Monster unconscious and Hermey extracts his teeth. Rudolph awakens, but he and his family are blocked from their escape by the also awakened beast who blocks the entrance to the cave. Yukon chases the now toothless monster to a cliff, driving him off the edge. Mourning Yukon's loss, Rudolph, the Donners, Clarice, and Hermey nonetheless return home. where everyone apologizes for the way they acted while telling them about their adventure. Santa promises Rudolph that he'll find homes for all the Misfit Toys, the Elf Foreman agrees to let Hermey open his own dentist's office a week after Christmas, and even Donner apologizes to Rudolph for being critical about his nose. Upon celebrating, Yukon returns with a tamed Abominable Snow Monster, now a kinder and gentler monster. However, a huge blizzard blows in which threatens to cancel Santa's flight. While announcing the news to the elves and reindeer, Santa is caught by Rudolph's gleaming nose and decides that its light could cut through the storm. Meanwhile, the Misfit Toys, grieving about being left out and unloved, are cheered up when Santa and Rudolph arrive to pick them up. The special ends with Santa wishing the viewers a merry Christmas as he and Rudolph fly off into the night.


The TV special, with the teleplay by Romeo Muller, introduced several new characters inspired by the song's lyrics. Muller told an interviewer shortly before his death that he would have preferred to base the teleplay on May's original book, but could not find a copy.

The "Island of Misfit Toys", another addition to the original story, is an island sanctuary where defective and unwanted toys are sent. It is during the initial scene on the Island that Johnny Marks standard, "The Most Wonderful Day of the Year" is performed by the inhabitants. Toy versions of nearly every character from this show were produced in the 1990s. Among its inhabitants are:

Posted by MrGarabaldi at 5:41 PM