I am still at camp and I preloaded this song for my Monday Music.  I decided to go with one of my 80's new wave songs that I have on my MP3 with all the other songs I have from my favorite Decade. 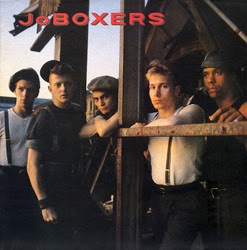 
The band's debut single, "Boxerbeat" found success in Britain, peaking at number three in the UK Singles Chart. However, it was their next hit, "Just Got Lucky," that truly broke the band internationally. This single also sold 250,000 copies, made the UK Top 10, and cracked the U.S. Top 40. It remains the band's only American top-40 hit to date, and the group are often branded as one-hit wonders in the U.S.
Subsequent singles "Johnny Friendly" and "Jealous Love" did less well. JoBoxers' debut album, Like Gangbusters, featuring all of the abovementioned hits, reached the Top 20 of the UK Albums Chart. The band released another single "Is This Really The First Time" and a second album Skin and Bone in 1985, but then split up, with McLusky joining Marche and Paul Wells in the indie-dance band called If? and Bostock joining Dave Stewart's post-Eurythmics group, The Spiritual Cowboys.
Meanwhile, Wayne remained in London and briefly attempted a solo career, releasing the album Square Business in 1987, featuring fellow former JoBoxer Dave Collard on keyboards. One single, "Mastermind" was released from this album. After his solo efforts proved unsuccessful, Wayne began pursuing an acting career. He would go on to appear in several stage productions (including a starring role in the successful West End musical Five Guys Named Moe) in the UK. In 1995, he returned to the U.S., settling in Los Angeles, California, to continue pursuing his acting/television career.

Posted by MrGarabaldi at 2:02 PM