Before I get started, I will be camping with the Boy Scouts, and internet will be sporadic.  I will post stuff in the scheduler and hope things pop up as it is supposed to. 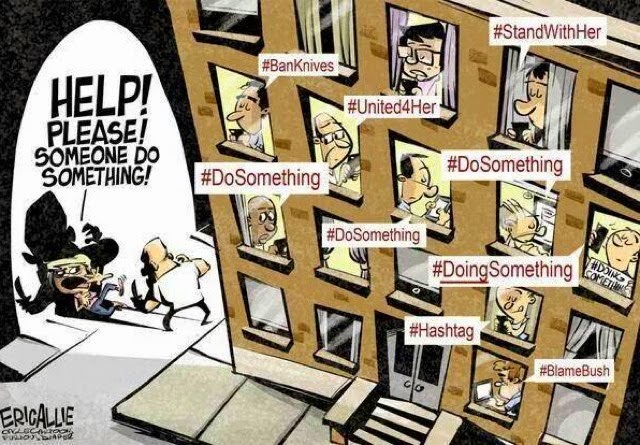 I had saved this cartoon from a while back, it was drawn when the Boko Haram a Nigerian Islamist kidnapped 276 girls mostly Christian girls from a boarding school.   Everybody can remember Michelle Obama Standing holding a sign 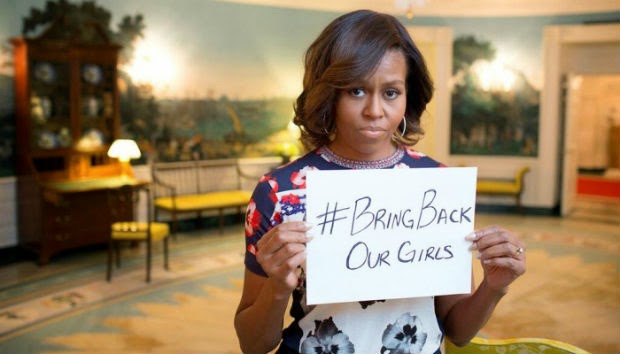 “My husband and I are outraged and heartbroken,” said First Lady Michelle Obama, subbing for the president in his weekly radio address May 10. “In these girls, Barack and I see our own daughters.”


I am going to touch on 2 different subjects on this post.....Yay go Touretts!!  Well anyway,
The cartoon touched upon the "hashtag activism" that the left and liberals seem to favor, and is based upon a real event that happened in March 13 1964 where Kitty Genovese was raped and stabbed to death and the investigations had uncovered that 38 people heard her cries(that number has changed to less and more since then but I will go with the official police report of the time.)  People outside the urban areas were amazed that all those people did nothing to stop the attack.  The effect is called "The diffusion of responsibility", the more people that know or hear something, the less people will step forward and do or say nothing.   The people in the city call it "the golden rule"  You mind your own business or they will come and do the same to you.  The incident in New York had already shown the effects of large groups of people living together.  there have been several case studies involving Mice and the resulting breakdown of society due to overcrowding. you can read of it here.
Two weeks later, a newspaper article reported the circumstances of Genovese's murder and the lack of reaction from numerous neighbors. The common portrayal of her neighbors as being fully aware of what was transpiring but completely unresponsive has since been criticized as inaccurate. Nonetheless, that portrayal prompted investigation into the social psychological phenomenon that has become known as the bystander effect or "Genovese syndrome", especially diffusion of responsibility.

Diffusion of responsibility can manifest itself:
Diffusion of responsibility is also called " more people see, the less will get done, many people will stand in the background and will see who will step up and then act.  It is pack dynamics, people are afraid to step outside the shelter and anonymity of the group and be noticed, especially if there is pressure or adverse reaction if you step forward.   I liken it to the military term " Don't volunteer"   this was endemic in basic training because the one that stepped forward usually got extra punishment.  I saw it and did my best to hide in the background and avoid notice from the Drill Sergeants.
I will then touch on my second topic and will then try to link them together,

The liberals and others from the left love to use hashtag to denote what pet causes they are interested in,  You have seen it on many things from #can't breath, #Ferguson#,#don't shoot#, #meat is murder# and many other social causes.  I disparage hashtag activism, for it does nothing, it is immediate, then fades away.  Like the attention span of the average liberal.  All it does is show how pious you are in embracing the latest social cause to your liberal friends, it shows that you have embraced the latest group think that is prevalent at the time and does nothing.
Left leaning People don't know how to use independent reasoning and logic in their decision process. The average liberal runs on pure emotions, they are the followers in group activities, they provide the "foot soldiers" for the latest cause.  The ones that use logic and reasoning and do what they do anyway, are the leaders, they know logic and reasoning but decide to continue anyway for the sake of power, they tell the followers what to do.  Those are the dangerous ones....those are the ones that do this for pure personal power and self gratification.
How this ties together are 2 fold, when people get in groups, they submerge their individuality for the group dynamics, even if something is wrong, they will not step up.  Also it ties in with the immediate gratification, if they don't do anything, the problem goes away.  If they get involved, then the problem stays with them and people in groups don't want that.  The average liberal believes in immediate gratification, "do something now" and "if it feels good".  Doing hashtags feels good, but does nothing, because unless you are in a western based society, where social media is very strong, the effect is lost everywhere else but to a liberal, being "active on emotion" is better than actually doing something...because if they focus on one cause too long and it falls out of favor because the next cause has arrived, then they are no longer on the forefront of "social Justice" and they lose standings with their friends and peer groups.
Posted by MrGarabaldi at 8:14 AM